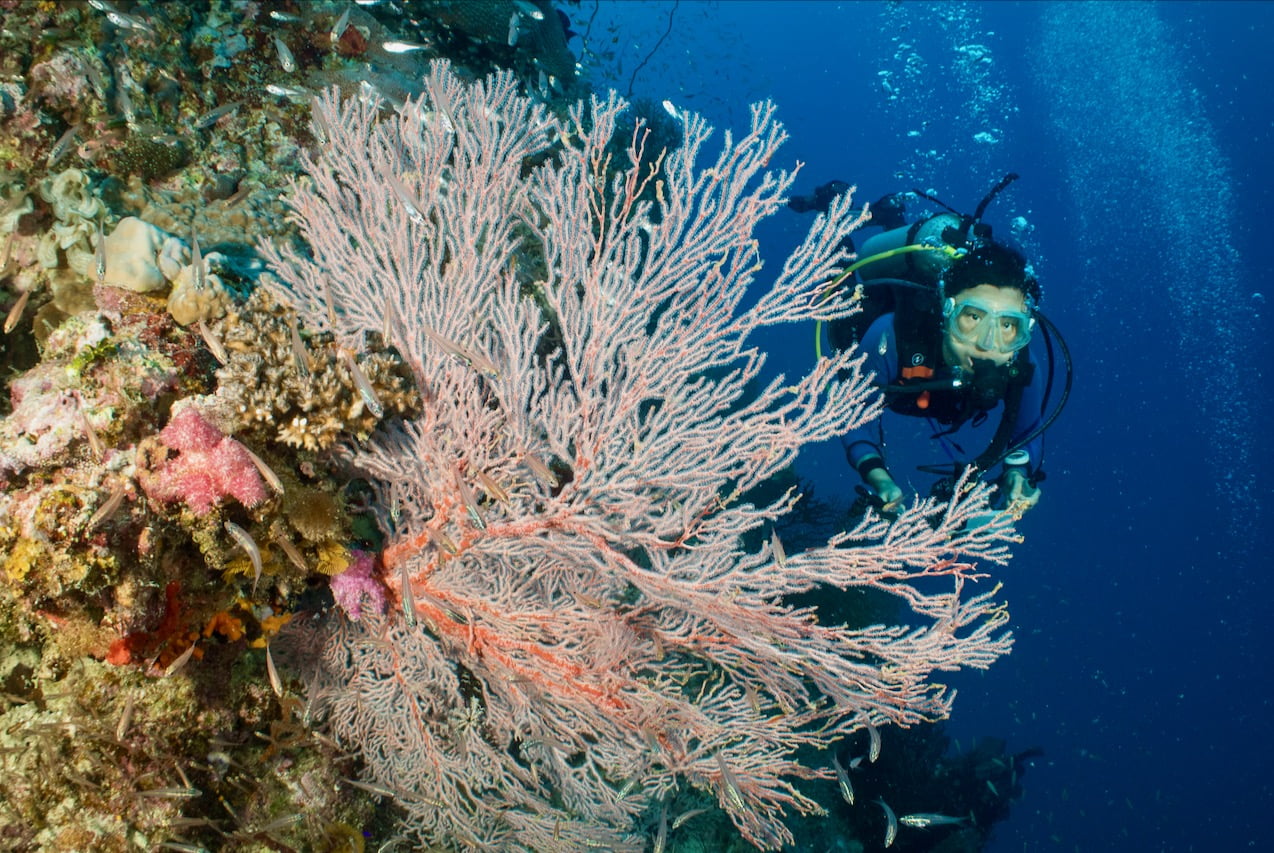 The claim that half the corals of the Great Barrier Reef are dead is based on a new method using ‘proxies’ (not a direct measure of coral cover), applied to badly cyclone damaged reefs, just after a major coral bleaching event – from which the corals have since recovered.

It has been reported across the world yet again, that the reef is ruin, but none of the publications reporting its demise have bothered to actually send journalists to go and look. They trust the scientists and the journal. Yet Terry Hughes, one of the authors of the new article has been shown time and again to just make stuff up when it comes to the health of individual coral reefs. His research centre (ARC Centre of Excellence for Coral Reef Studies) and the journal that published the most recent article claiming half the coral are dead (London’s Royal Society) have been mired in controversy for years.

One of the locations mentioned in the new study is in the far northern section, at North Direction Island. The coral reefs around this small, uninhabited steep granite island have been through the eye of some of the most destructive category 4 and 5 cyclones — Ita in 2014 and Nathan in 2015 — and they were at the centre of the coral bleaching event in the summer of 2016. But the coral reefs there have since recovered.

I dived nearby reefs for a week earlier this year. I went to the Ribbon reefs that follow the edge of Australia’s continental shelf in the far north east to find, and film, coral bleaching.

It is claimed the Ribbon reefs are amongst the worst affected – 60% dead from bleaching. Bleaching is when corals turn white as a result of warmer water temperatures, which climate scientists say is being caused by global warming.

But I couldn’t find any significant bleaching. I mostly found jewelled curtains of coral, appearing to cascade down underwater cliff faces. So colourful, so beautiful, all in crystal clear and warm waters with curious clownfish and a giant potato cod.

I found the 2,000-year old coral colony known as The Monolith. This is perhaps the largest colony of Pavona clavus coral in the world. I was told by the boat skipper that The Monolith had been badly bleached in 2016. It had fully recovered when I was filmed swimming over it in January 2020. I was filmed by Emmy award winning underwater cinematographer Clint Hempsall.

While the new article by the James Cook University scientists, claims both the incident of coral bleaching and cyclones is increasing, there is actually no evidence to support either contention.

The available data (1971 to 2017) indicates there has actually been a decrease in both the number and severity of cyclones in the Australian region.

Coral bleaching events tend to be cyclical and coincide with periods of exceptionally low sea levels. The dramatic falls in sea level across the western Pacific Ocean in 2016 are charted on page 267 (chapter 17) of a book I edited, ‘Climate Change: The Facts 2020′.

The dramatic falls in sea level were associated with an El Nino event. These have been documented at the Great Barrier Reef back 3,000 years by Helen McGregor at Wollongong University. I’m specifically thinking of her paper entitled ‘Coral micro atoll reconstructions of El Nino-Southern Oscillation: New windows on seasonal and inter annual processes’, which was published in the journal ‘Past Global Changes’ (volume 21) in 2013.

I was born and bred in northern Australia. The Great Barrier Reef is a second home, and for me the most awe-inspiring natural environment on Earth.

There is a photograph of my mother, then Joan Edith Pearce, standing knee deep surrounded by Porites coral micro atolls that are stunted and bleached. But Mum, who turns 90 next March, said there was no talk of bleaching back then, everyone was fearful of the starfish.

It is the case that back then and until recently, coral calcification rates were calculated based on coring of the large Porites corals. By dissecting micro-atolls — the type shown in the picture of my mother at Heron Island back in 1955 — it is possible to understand that sea level has been a constraint to coral growth at the Great Barrier reef for at least this long: at least 3,000 years. There is no evidence of overall sea level rise, there is evidence that sea levels have fallen 1.5 metre since the Holocene High Stand.

Corals are animals, closely related to jelly fish, but they differ in having a limestone skeleton. This is hard-stuff, calcium carbonate, and it can persist in the environment and provide an indication of changes in sea level, and also the growth rates of corals, over thousands of years.

There are well established techniques for coring the Porites corals, and then measuring growth rates. But since 2005 the Australian Institute of Marine Science has stopped using this technique to measure how well corals are growing at the Great Barrier Reef. The few studies still using the old technique suggest that as would be expected, as water temperatures have increased marginally, coral growth rates have also increased.

But rather than admit this fact that runs contrary to the zeitgeist, leading research institutions have moved from such direct measures to new and complicated ‘proxies’ – they thus have more flexibility in what they ‘find’ because the measurement is no-longer something that actually represents coral growth rates or coral cover. A proxy vote, for examples, is something delegated. This gives the researchers at James Cook University the potential to generate what might be considered policy-based evidence.

Real science is about actual measurements of real phenomena, and real world observations.

A conclusion in the media reporting of the most recent research is that “there is no time to lose, we must sharply decrease greenhouse gas emissions”. Another assumption, perhaps inadvertently created with bias and agenda. Though, this is not even written into the article. Rather it is reported in the media associated with the article just published by London’s Royal Society. It is assumed. It is also assumed that the corals at North Direction island never recovered from the cyclones and bleaching – yet they have recovered! The coral reefs across this region are magnificent right now, and this can be verified by diving them with one’s eyes wide open.

The Great Barrier Reef is resilient, and individual reefs, including the reefs at North Direction Island, do recover. As I explain in my new short documentary film, the huge colony of Pavona clavus known as The Monolith, that stretches about 30 metres up the limestone ridge at Ribbon Reef No 10, has already endured countless cyclones and bleaching events – it is a survivor.

The Great Barrier Reef as one ecosystem, comprises nearly 3,000 individual reefs stretching for 2,000 kilometres. It is still visible from outer space.

Damaged areas can always be found somewhere because a coral reef that is mature and spectacular today, may be smashed by a cyclone tomorrow.

If we are to accurately measure coral cover, and coral growth rates, then the cycles need to be considered. The methodology used to assess the health of the Great Barrier Reef should be based on direct measures (not proxies), it should be over a reasonable time span understanding that there are regular bleaching events every 18.6 years corresponding with the lunar declination cycle, and it should include a large number of coral reefs.

When we are able to move beyond ‘postmodern science’, only then will what be written in the most prestigious journals correspond with what I see in the real world.

Oh, how I love jumping off boats and going under the water at the Great Barrier Reef where there are still colourful corals and such curious fish.

It is a pity that the make believe in the science journals creates so much fear and anxiety about something that is still so beautiful and magical.