It is often reported that the Great Barrier Reef is half dead, specifically that the corals are bleached, and the water quality is degraded with pesticides and plastics. If I didn’t know better, I might never want to visit a coral reef, lest I be confronted by this reality – apparently all our fault, because we drive cars. Except the coral reefs on the way to Myrmidon made me feel so alive. Every day, I dived into crystal clear warm water, to be greeted by little fishes. Every day, I wondered if we would make it all the way to Myrmidon – an ancient and detached coral reef that juts out into the South Pacific Ocean on the eastern edge of the Great Barrier Reef.

I tell this story in my film ‘Finding Porites’ that will be screened at the Windsor Theatre in Nedlands, Perth, on 1st December. Get your tickets here, and we now have a poster: 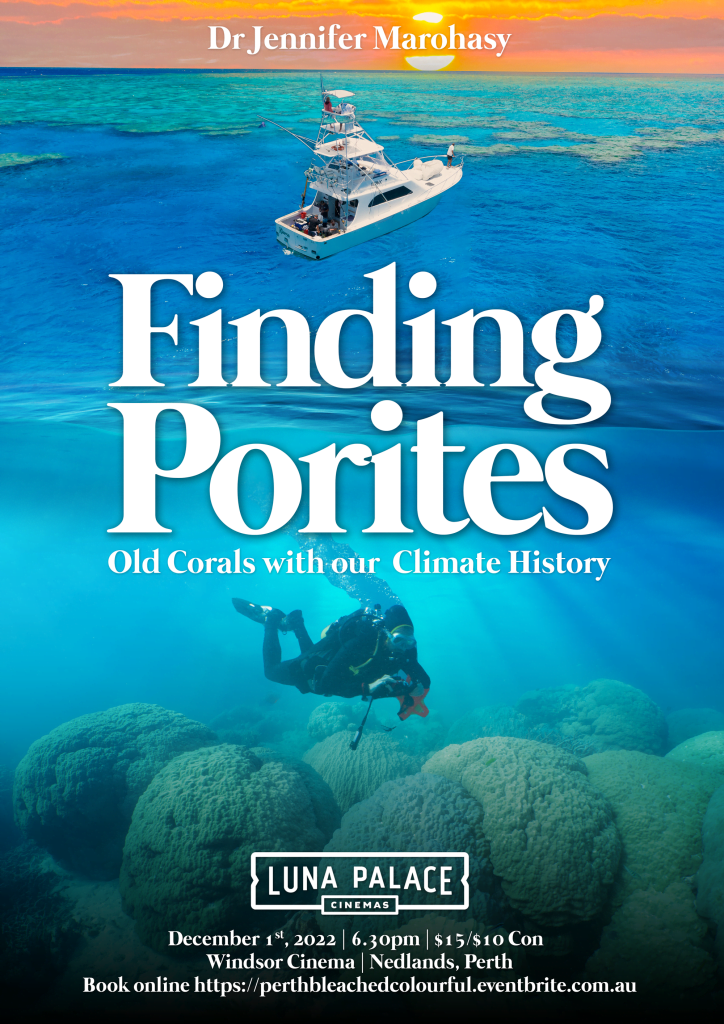 When I was just seven years old my family travelled from Cooktown in the far north, down the entire Queensland coast stopping along the way in seaside caravan parks. I missed grade 2 of school, but I got to swim, and observe nature close-up, and I was allowed to be curious.

As a backpacker during University holidays I went to Fitzroy Island, and also snorkelled the reefs fringing the southern Whitsunday Islands.

Beginning in 1998, I had the opportunity to work for the Queensland sugar industry and visit farms along important river systems from Mossman to Hervey Bay – as well as visiting inshore corals reefs just beyond these river mouths.

Some ten years ago, from 2009 through until about 2014, I lived at Cooee Bay and snorkelled the reefs fringing Great Keppel Island.

All this time, for the last 50 years, the marine biologists and media, have been heralding the imminent collapse of these coral reef ecosystems that are part of the Great Barrier Reef. But they are still there, and as far as I can tell as beautiful as ever.

In nature, as in life, we can sometimes find whatever we are looking for and this is especially the case at coral reefs. Cyclones and sea level change – especially localised dramatic falls in sea level associated with El Niño events that periodically cause widespread bleaching – will destroy individual coral gardens. And over the edge of reef crests there are always piles of coral rubble. In fact, some of our most mature coral reef systems can grow into flat-topped platforms with live coral only around the perimeter: down the walls. The tops of these ancient reefs may be capped with coralline algae.

I was out recently scuba diving at Pixie Reef, just 22 nautical miles to the north east of Cairns. I went out with two underwater photographers to document Pixie reef for this moment in time. Because despite all the money spent on Great Barrier Reef research over recent decades there is no actual data giving any indication of the true state of its more than 3000 individual coral reefs.

Pixie Reef was classified as badly bleached in 2016, but there are no transect photographs (at least none publicly available) or video giving any idea what this looked like. We just have a score of ‘4’ from Terry Hughes looking out the window of an aeroplane flying at 150 metres altitude.

I’ve put up my transect photographs from Pixie Reef. You can find all 360 photographs here

If I had never visited the Great Barrier Reef, I would be inclined to believe that it was ruined – I could not know otherwise. I would only have the absurd narrative as repeated on the nightly television news. That I am genuinely curious about the Great Barrier Reef, rather than worried about it, must inevitably have a profound effect not just on my political outlook but also my state of mind.

So many of our once most trusted institutions are now engaged in little more than keeping us, the public, in a state of unnecessary and constant fear. It is so wrong. And it will stop people from visiting the still magical Great Barrier Reef.

Managers at the Australian Bureau of Meteorology have for years misled the public on the state of the climate. It is not getting drier, and the extent to which some coastal locations may have warmed over the last hundreds years is unclear because of all the changes to the measurement methods. Also, the extent of the remodelling of the temperature record can now be explored through an interactive table, unique to this website, with maximum and minimum annual series for all 112 ACORN-SAT sites (versions 1 and 2) juxtaposed against the raw data.

I’ve spent a lot of time over the last decade researching a technique for forecasting rainfall using artificial neural networks, a form of artificial intelligence. A list of my published technical papers detailing the technique can be found at https://climatelab.com.au/publications/.