I’ve just finished editing the fourth book in the ‘Climate Change: The Facts’ series. The book has 20 chapters by 20 fiercely independent thinkers who follow the evidence, rather than the consensus, on all things climate change. The book has a dedicated home page, with a blog, fact sheets, and information on how to purchase your own copy.

This book will soon be available at Amazons, with this currently being arranged through the Australian publisher and distributor, Australian Scholarly Publishers.

I also edited the previous book in this series, which sold well. There are 113 reviews of Climate Change: The Facts 2017 at Amazons, most (80%) giving it 5 stars. 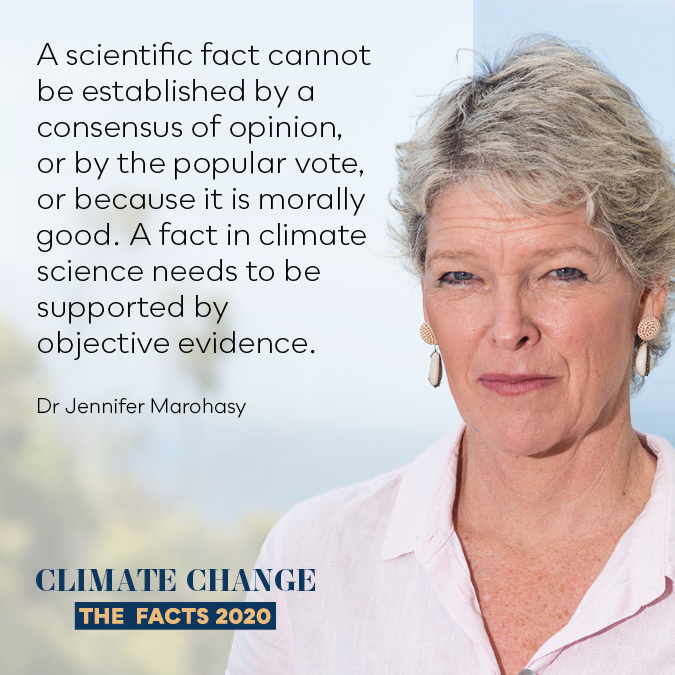 My peer-reviewed scientific articles on weather and climate forecasting, using artificial neural networks (ANNs), which are a form of machine learning, can be found at the publication page of the Climate Lab Pty Ltd.

Much of my very early career was spent as a field biologist in first Madagascar and then East Africa. The technical papers from this time are here: https://jennifermarohasy.com/publications/early-scientific-publications/

I worked mostly under the direction of Mike Nahan at the IPA from 2003 through to about 2008. I wrote on a variety of topics, with the titles of these documents listed here, and for some there are URLs.

One of these reports followed a visit to two gold mines in Indonesia, and is still a good read: Politics and the Environment in Indonesia, IPA Review, July 2007.

THE REST OF THIS PAGE IS A WORK IN PROGRESS …

Marohasy J. 2015.  Save the Murray: Think About the Fish, and Thank the Farmers.  Submission to the Senate Select Committee into the Murray-Darling Basin Plan, made on behalf of Myth and the Murray Group.

Abbot J. & Marohasy J., 2015. Forecasting of monthly rainfall in the Murray Darling Basin, Australia: Miles as a case study. WIT Transactions on Ecology and the Environment, 197: 149-159.

The Native Fish Strategy for the Murray Darling Basin is reviewed in a recent conference paper by Jennifer Marohasy and John Abbot entitled ‘Deconstructing the native fish strategy for Australia’s Murray Daring Catchment’ published by the Wessex Institute and available for free download at  http://library.witpress.com/pages/PaperInfo.asp?PaperID=24656

It might be said that the Australian Bureau of Meteorology takes a revisionist approach to history, adjusting the historical temperature record so that it accords with the theory of anthropogenic global warming. This process of homogenisation is explained in ‘Modelling Australian and global temperatures: what’s wrong? Bourke and Amberley as case studies’ published by the Sydney Institute in August 2014.

On 18th March, 2013, I was published in the Australian Financial Review writing about how new Australian Media Rules Prohibit Dissent. The legal insights followed publication of a series of papers with John Abbot in the British journal Environmental Law and Management and the Australian law journal Public Law Review on FOI and climate science.

With John Abbot I made a submission to the Proposed [Murray Darling] Basin Plan. This document can be downloaded [10MB] here.

5. A book and book chapter

A list of these peer-reviewed publications including journal articles on insect taxonomy, biology and ecology and plant taxonomy can be found here. Early in my career I was posted to Madagascar and this research work is credited with the successful biological control of the North Queensland weed rubbervine, Crypostegia grandiflora.  This history is detailed in the book Reclaiming lost provinces: A century of weed biological control in Queensland by Craig Walton and published by the Department of Natural Resources and Mines, Brisbane, 2005.

I was regularly published in the IPA Review for many years, a list of these articles (with links) can be found here.

On Line Opinion is a not-for-profit publication prepared to publish stories that contradict popular narratives. To read Jennifer Marohasy at On Line Opinion click here.  Articles include:

Saving the Coorong by restoring its native state
About the need to restore the Murray River’s estuary, published August 14, 2008, click here.

Received evidence for deterioration in water quality in the River Murray
About CSIRO misleading the public on salinity levels, published August 8, 2003, click here.

10. Some articles on the Murray Darling

Myth and the Murray: Measuring the real state of the river environment
A review of the evidence on Murray cod numbers, healthy of Riverred gums, salinity levels and more
IPA Backgrounder, December 2003

Why ‘Save the Murray’?
How The Australian newspaper ran a very political and very misinformed campaign
Quadrant Magazine, Volume XLVIII, Number 12 (December 2004)

The disputed natural history of the Lower Murray
The technical literature is clear, the Lower Lakes were once part of the Murray River’s estuary
Quadrant On Line, November 21, 2010

The Murray: A fresh perspective
There was no navigable passage from the Murray to the Southern Ocean in 1831
Quadrant On Line, September 19, 2010

11. Some articles on the Great Barrier Reef

WWF Says ‘Jump!’, governments ask ‘How high?’
About the WWF ‘Save the Great Barrier Reef’ campaign
Archived by the National Library of Australia, http://nla.gov.au/nla.arc-33869

Deceit in the name of conservation
Chief scientist ignores evidence to maintain the perception of pollution
IPA Review, March 2003

Find more links and articles from Dr Marohasy on the Great Barrier Reef by clicking here.

12. Some articles on climate change

Case of the warm and fuzzy
Believe the data, not the activists, there is no declining rainfall trend for Eastern Australia
The Australian, August 23, 2008

Reef may benefit from global warming
The expected rise in sea level associated with global warming may benefit coral reefs, global threats to the coral reefs of the world include damaging fish practices and pollution, and the UN should work harder to address these issues
The Australian, January 31, 2007

13. Some articles on nature conservation

Save the Whaling
Whaling can be sustainable, the current slaughter of dugongs in North Queensland is not
Cosmos, Issue 3, September 2005

The Loss of the Baiji
The recent extinction of the Yangtze River Dolphin
IPA Review, October 2006, pages 30-31

14. An article on Australian agriculture

15.  An article on mining and misguided environmental campaigning in Indonesia

Politics and the Environment in Indonesia, IPA REVIEW, July 2007, http://www.ipa.org.au/library/59_2_MAROHASY.pdf