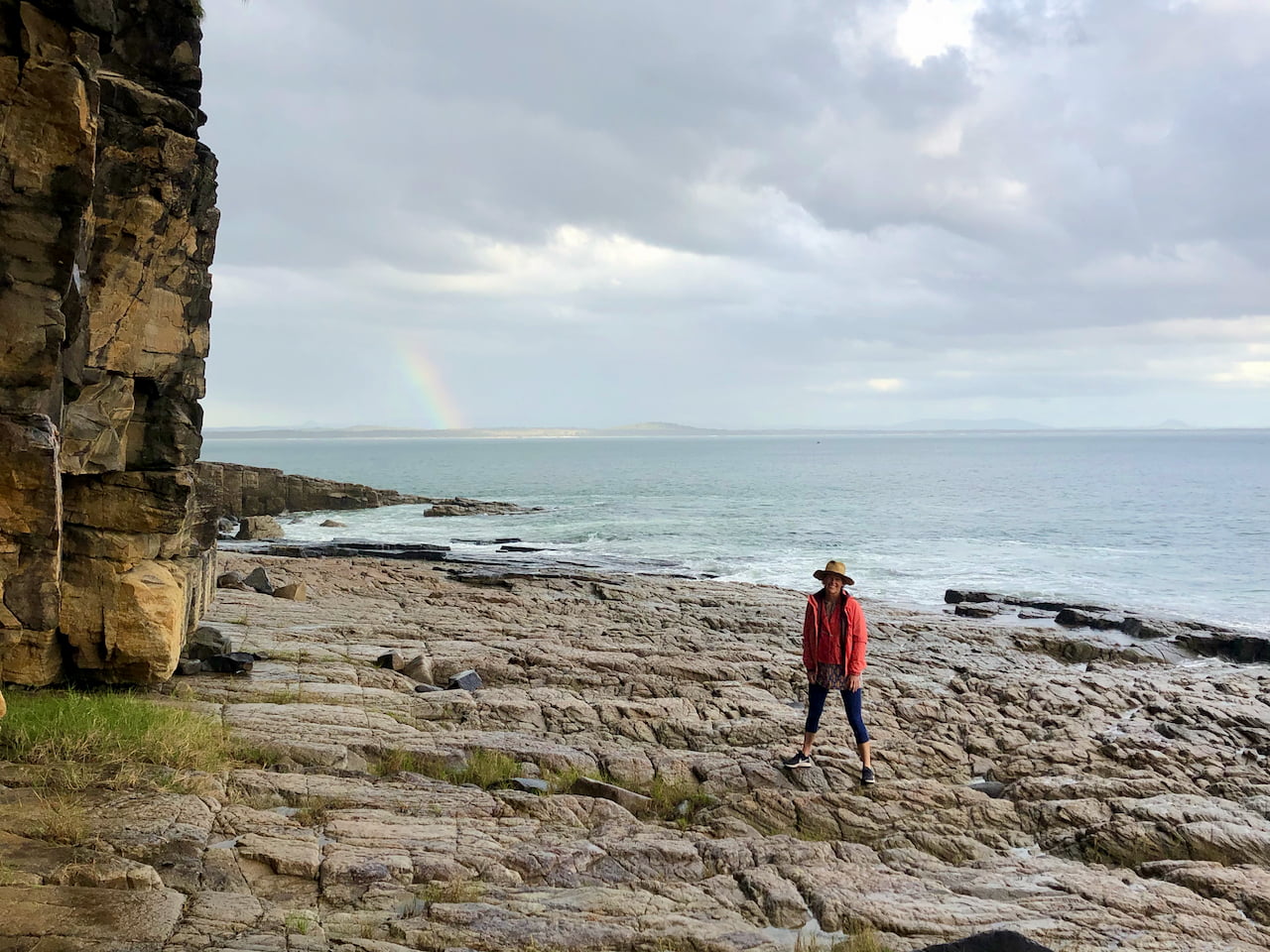 I live by the sea and like walking along the coastline including scrambling over the rock ledges in Noosa National Park. All the way from Noosa to Sydney it is possible to find wave-cut platforms etched out of the sandstone towards the bottom of the cliff faces.

The sandstone is very old, thought to date from the time of the dinosaurs, perhaps 180 million years ago, but the ledges – referred to as platforms when they are wide – are much younger. Expert geologists suggest that my favourite very wide, wave-cut platform, at the bottom of the cliff face that drops down from Boiling Pot Lookout, is about 125,000 years old.

It formed when sea levels were higher, and the cutting action of waves would have brought down great lumps of rock from above. The debris would have been removed by the wash, beyond the intertidal zone. The cliff face would have been receding landward as the sea ate into it. This is how cliffs are formed, and when they are of sandstone they sometimes leave behind ledges and wave-cut platforms as relics, showing sea levels were higher in a bygone age.

For the last few years, I’ve been standing on the wide platform at the bottom of the cliff face, below the lookout, at the time of the highest tide each year. Usually, the waves smash the rocks about a metre below, never reaching me. So, I confidently snub my nose at claims of unprecedented high sea level as repeated on the nightly news and in IPCC reports. I also use it as an occasion to agree with some geologists who argue sea levels were even higher 125,000 years ago, during that period known as the Eemian.

Australia is a good place to study sea level change. Unlike Britain, Australia wasn’t covered in an ice sheet during the last ice age. Ice sheets complicate things because when all the ice melts – as Scotland’s ice sheet did a little over 9,000 years ago – part of the landmass may gradually rebound dragging its bottom half under. So, the north of the British Isles is rising, while the south has been sinking up to 0.6mm per year for the last 1,000 years – about 60 centimetres in total since the time of William the Conqueror. The sinking of this landmass is sometimes confused with rising sea levels, and it is claimed that this is occurring due to rising carbon dioxide emissions since the Industrial Revolution.

Where I live, about halfway down the east coast of Australia, sea levels began to rise about 16,000 years ago with the melting of Antarctica. By 9,000 years ago, sea levels around the world had risen by 12,000 centimetres, or 120 metres, the equivalent of a 25-storey building! The extent of this rise dwarfs the 36-centimetre rise that occurred over the last 150 years and the subsidence in places like Lincolnshire which adds up to just a few centimetres over the same period, both of which are worrying the Intergovernmental Panel on Climate Change (IPCC).

Indeed, it is uncontroversial, at least in peer-reviewed journals, that global sea level rise at the end of the last ice age occurred at a rate 10 times faster than the modern rate of about 3mm per year – which is about how much Scotland is rising due to isostatic rebound.

After being buried under several kilometres of ice, much of Europe and North America is experiencing uplift. For example, the ice retreated from Sweden 9,900 to 10,300 years ago and large-scale uplift is still occurring to the extent that the tidal gauge in Stockholm shows sea levels have fallen by about 50 cm over the last 129 years — an average annual rate of fall of 3.9mm per year. The uplift at Juneau, in Alaska, is even more extreme: in just 80 years sea levels have fallen by 120cm at a steady rate of minus 15mm per year. This reality jars with the notion of catastrophic sea level rise, so the IPCC ‘detrends’ the measurements from these tidal gauges, until they show sea level rise.

These numbers don’t make easy reading and may seem extraordinary, but sea levels really did rise globally by 120 metres at the end of the last ice age. Yet this inconvenient fact tends to be excluded from political summaries on climate change that rely on remodelled data.

According to the latest IPCC report on climate change – Assessment Report 6, published just before the 26th Conference of Parties (COP26) in Glasgow late last year – global temperatures are the warmest they have been for at least the last 125,000 years. There is no mention that in between it got quite cold, and Scotland (where that meeting was held) was covered in a lot of ice.

Given the landmass of Australia has not sunk or risen much over this time period, if the IPCC report is correct the waves should cover my favourite 125,000-year-old platform each high tide and I should be washed away.

The highest tide for this year was forecast for Monday 3 January at 8.27am. A four-metre-high swell was also forecast because ex-tropical Seth was lingering just off-shore. That morning, I hesitated.  I didn’t go down to the platform and risk being washed away.

Instead, I positioned myself up a ledge and filmed Jared walking around to the platform to be there for the moment of the highest tide.

There are ledges at three different heights in Noosa National Park – and along the coastline all the way to Sydney. This is evidence etched in stone that there have been times in the past when sea levels were even higher than they are now. Why? Because the climate has always changed.

This is a variation of an article first published in the UK edition of The Spectator magazine on 22nd January 2022 entitled ‘Aussie Life’.