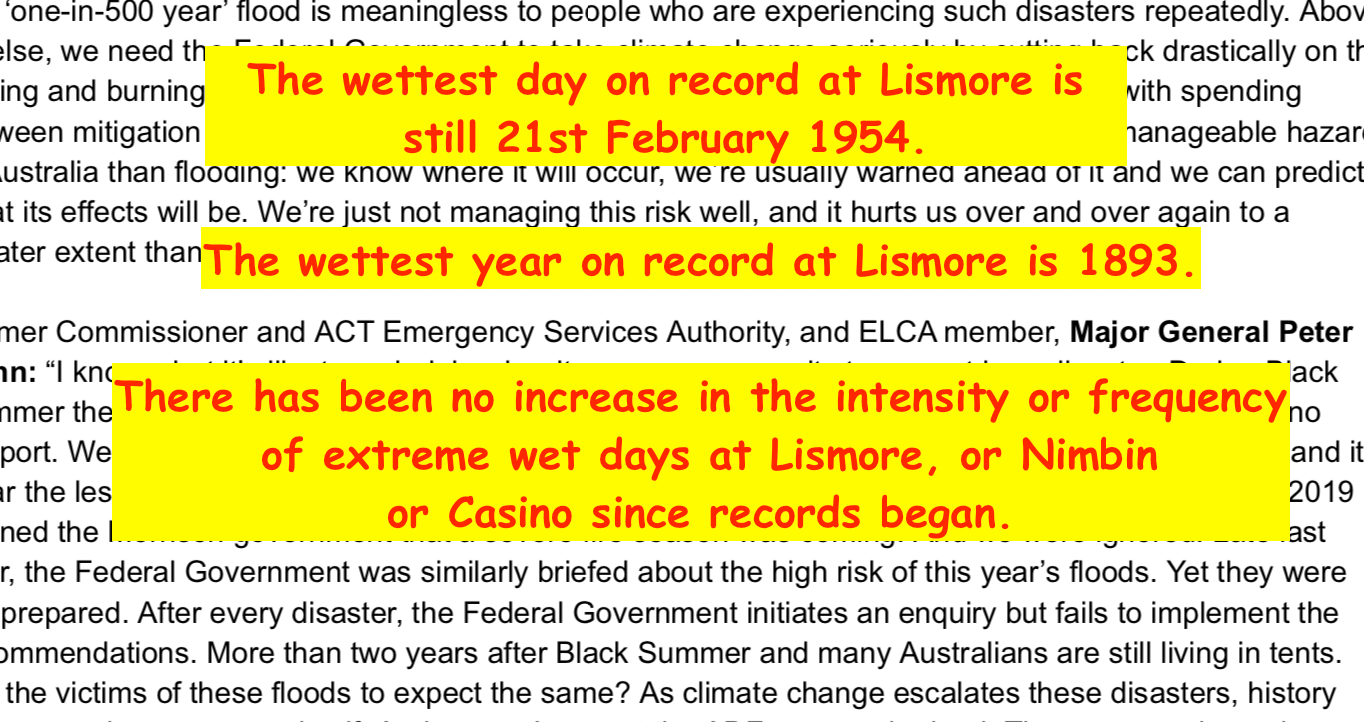 Torrential rains along the east coast of Australia have caused terrible flooding.  I’ve previously provided some statistics and context for southeast Queensland, but the focus has since shifted to the town of Lismore in northern New South Wales.

The Australian Bureau of Meteorology in its monthly summary for February 2022 is claiming a new 24-hour record for Lismore of 146.8 mm from the Lismore airport, which only began recording rainfall data in 2003, while ignoring the longer historical record from Centre Street Lismore that begins in 1884.

When the long record for Lismore town is combined with the record for Lismore Airport, there is no evidence that either the number of days of extreme rainfall each year or the intensity of this rainfall has increased for the period 1885 to 2021 at Lismore.

Paul Barry is a taxpayer funded journalist apparently unable to find a single statistic to support the popular claim that the recent flooding of Lismore was caused by climate change.   But this didn’t stop him helping himself to some 8 minutes of primetime television on Monday night to create the impression that Lismore is climate change.  It was all inuendo: not a single fact was presented.

The Climate Council is headed by Tim Flannery who once infamously claimed that because of climate change the dams would never fill again, that drought was the new norm for Australia.  He has never apologised or acknowledged he got it so wrong.  Since the flooding of Lismore his Climate Council has put out a report claiming that:

The pattern of more intense rainfall events is well established in Australia. In recent decades, the intensity of short duration (hourly) extreme rainfall events has increased by 10 percent.

The intense rainfall and floods devastating communities in Queensland and New South Wales is taking place in an atmosphere made warmer and wetter by climate change, which is driven by the burning of coal, oil, and gas.

There is no more manageable hazard in Australia than flooding: we know where it will occur, we’re usually warned ahead of it and we can predict what its effects will be. We’re just not managing this risk well, and it hurts us over and over again to a greater extent than it should.

If we know all of this why wasn’t the new flood peak of 14.37 metres at Lismore forecast?

Volcanic aerosols from what was likely the most explosive volcanic eruption of my lifetime travelled west reaching Australia on 18th January 2022 with flooding rains washing away railway lines and roads in central Australia.  By February 15th, the plume had circled the Earth and was back again over Australia with the rain beginning to fall again, this time in southeast Queensland and later extending into northern New South Wales.   Jo Nova provides a detailed explanation of why this volcanic eruption was different and how it may have contributed to the torrential rains and flooding.

Flooding in the town of Lismore was devastating with the Wilson River peaking at a new record flood height of 14.37 metres, exceeding the old record by more than 2 metres.   This new flood record for Lismore could be a consequence of more intense rainfall in the upper catchment, but it could also be a consequence of how the flood waters were mismanaged. There were new levy banks in accordance with a flood plan that may have grossly underestimated the volume of flood waters this year.

While there were some very high rainfall totals in the upper Lismore catchment, none exceeded the Australian record of 907 mm that fell at Crohamhurst in the upper Brisbane catchment on 3rd February 1893.  This followed the explosion of Calbuco in southern Chile that same year.  Of course, the largest explosion of modern times is Mount Tambora in Indonesia on 10thApril 1815 that caused incessant rain and failed crops across Europe for the ensuing three years.  The year 1816 is known as ‘The Year Without a Summer’ because it was so cold and wet in England and France.

Ignoring the potential impact of such volcanic eruptions on rainfall, the developing narrative is that there are many new record 24-hour rainfall totals that can be blamed on climate change.  In the case of Lismore, and the claimed new record for February 2022, this is an artefact of the Australian Bureau of Meteorology beginning the rainfall record for Lismore in 2003 when the weather stations was moved from Centre Street to the Lismore airport.

The claim is that at Lismore, and everywhere else, both the number of extreme wet days and the intensity of rainfall is increasing.

But the daily rainfall statistics for Lismore do not support this theory.

Chris Gillham, working with me, has compared the number of days of extreme rainfall and the amount of rainfall that fell during the years 1885 and 2021 (inclusive) at Lismore, as shown in Charts 4, 5 and 6.   This analysis is based on the combined town and airport daily records for Lismore.

I’ve been told that I must accept that emissions of carbon dioxide since the industrial revolution have caused climate change and made the flooding worse at Lismore.  I’ve been told that this is the only acceptable position, endorsed by both the Coalition government and the Labor opposition.

But could it be that the new flood peak was reached because the levies were not built high enough and the flood mitigation systems more generally based on an inadequate understanding of historical rainfall patterns?

Could it be that the flood mitigation planning for Lismore was prefaced on a rainfall record that only begins in 2003 and that assumed a future more likely characterised by drought, than intense 24-hour totals in the upper catchment caused by volcanic explosions in far away Tonga?  Could volcanic aerosols not carbon dioxide be to blame? 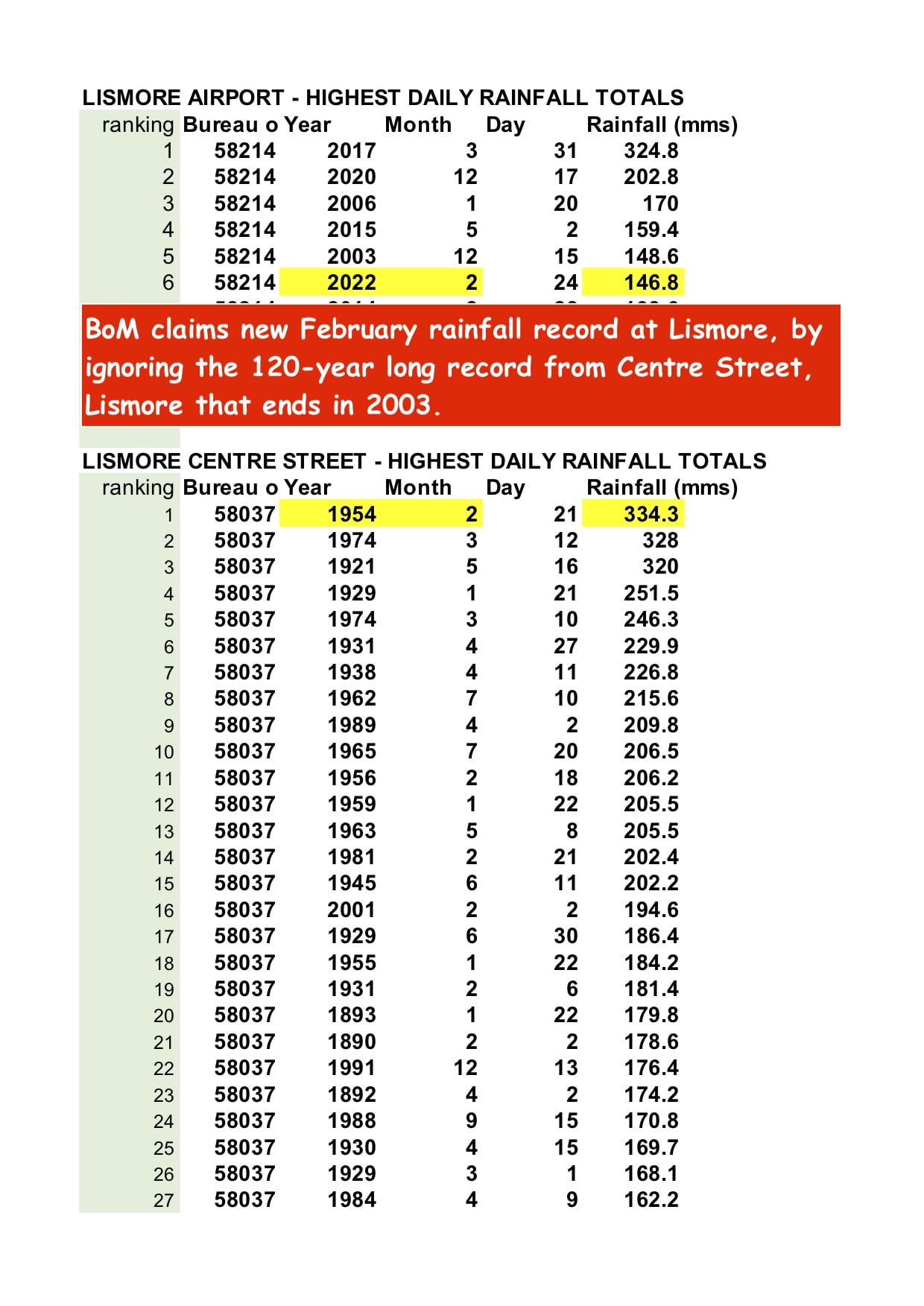 Could it be that the eruption of Hunga Tonga-Hunga Ha’apai super charged the atmosphere with aerosols contributing to the exceptionally high 24-hour total at Rosebank on 28th January 2022?  Volcanic eruptions have got nothing to do with human-emissions of carbon dioxide and are not part of the theory of human-caused catastrophic global warming.

The rainfall statistics for Lismore show that neither the frequency nor intensity of extreme rainfall has increased at Lismore since 1885.  This directly contradicts the claims of the Greg Mullins from the Climate Council and Paul Barry from ABC Television.

The wettest day on record at Lismore is still 21st February 1954.

There is an even longer rainfall record for the nearby town of Casino, and it doesn’t show an increase in the intensity or frequency of extreme rainfall days either.