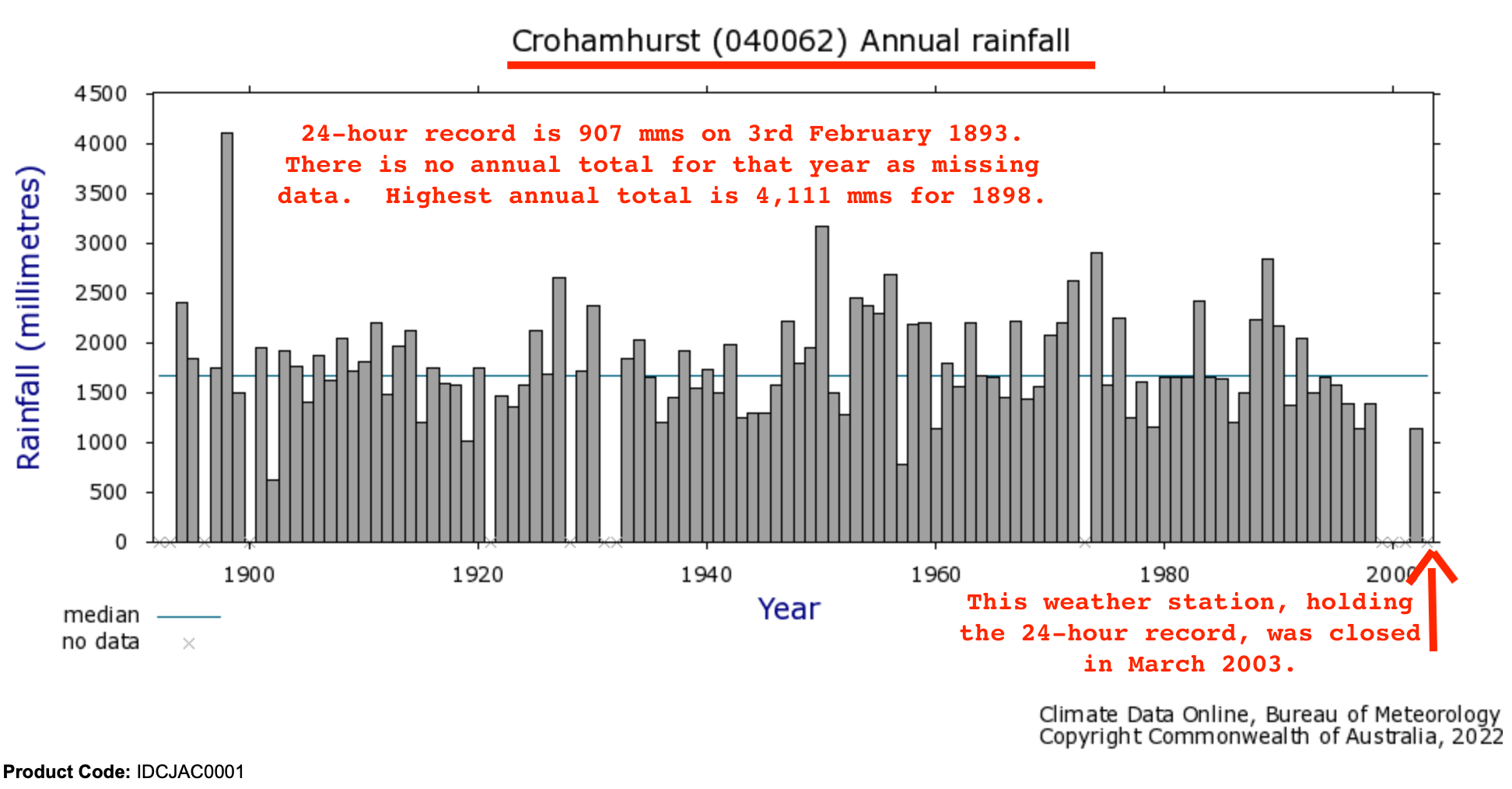 The recent torrential rains in southeast Queensland are not unprecedented.  The Australian 24-hour rainfall record of 907 mm is still Crohamhurst in the Brisbane catchment recorded on 3rd February 1893.  We don’t know how much rain fell at Crohamhurst in February 2022 because that weather station (#040062)) was closed by the Australian Bureau of Meteorology in March 2003.

The simulation models currently used by the Bureau have no skill at seasonal rainfall forecasting.  Models based on pattern analysis of historical data would be more accurate.   The reliable forecasting of exceptionally wet summers likely requires the monitoring of volcanic aerosols in the stratosphere, as well as accurate historic temperature and rainfall records.

After devastating flooding along the east coast of Australia, the Climate Council has put out a media release calling for action on climate change: that the Australian government mandate renewable energy and build an economy free from fossil fuels.  This is no solution.  And it is worth remembering that their Chief Councillor, Tim Flannery, gave advice not so long ago that it would never flood again – that Australia was doomed to eternal drought.  It should be obvious by now that the armchair environmentalists haven’t a clue when it comes to the weather.

For these true believers, it is too awful to even consider that the Australian Bureau of Meteorology (BoM) could be exaggerating global warming by changing all the historical temperature measurements until the cooling to 1960 is changed to warming.   Over the last twenty years remodelling of the historical temperature data by the Bureau has stripped away the cycles, so even cool years now add warming to the official trend.  In denying the very nature of Australia’s climate, which is dominated by wet and dry cycles, the experts are unable to anticipate extremely wet weather because they have lost all sense of history.

February 2022 was extremely wet in southeast Queensland, where I live.  The city of Brisbane flooded again.  There were tens of thousands of homes inundated.  It is a tragedy.  This is the second time in eleven years.

The flooding in 2011 was caused by the emergency release of water from Wivenhoe Dam, a dam built for flood mitigation following devastating flooding in 1974.  The 2011 flooding was the subject of a class action with the Queensland government, SunWater and SEQ Water (the dam operators) recently found negligent.

During the worst of the flooding this year the dam operator again kept releasing water as the city flooded.  Though the torrential rains had stopped, water kept being released because the Bureau forecast that more – even worst – rain was imminent.  Rain that never eventuated.

As usual, the Bureau’s skill at forecasting proved dismal with devastating consequences.

I benchmarked the skill of the Bureau’s simulation modelling for seasonal rainfall forecasting in a series of papers with John Abbot published in international peer-reviewed journals, conference papers, and as book chapters from 2012 to 2017.  Our conclusion was that the Bureau’s simulation model POAMA, developed over a period of 20-years in collaboration with other IPCC-aligned scientists, had very limited skill at rainfall forecasting despite being run on an expensive supercomputer – the Bureau now has the largest supercomputer in the Southern Hemisphere, but the skill of their rainfall forecasting is not improving.

The Bureau’s simulation models are simply unable to forecast the big rainfall events at a reasonable lead time.

There is a growing body of evidence showing the most skilful medium and long-term rainfall forecasts are made using statistical models in combination with artificial intelligence.  These are the models that John Abbot and I were developing from February 2011 – following the January 2011 flooding that I foresaw as avoidable had the Bureau warned the dam operators of the impending wet summer.

At that time, back in late 2010, it was evident from the very high Southern Oscillation Index (SOI) that we were likely to experience a very wet summer.   But there was no preparation – Wivenhoe Dam was kept full of water until it was too late.

This last summer it was not as obvious that we were going to experience torrential flooding rains.  It could be that the relatively mild La Nina conditions this year across the South Pacific were made worse by an atmosphere exceptionally high in volcanic aerosols from the explosion of Hunga Tonga-Hunga Ha’apai a month earlier.

Very high rainfall totals in Hong Kong in 1982 correlate with the arrival of stratospheric aerosol plumes from the eruption of El Chichon, which spewed 20 million tonnes of aerosol.

There are technical papers that explains how atmospheres high in aerosols can contribute to exceptionally high rainfall, but this literature is ignored by mainstream climate scientists who continue to run simulation models mistakenly emphasising the role of carbon dioxide in climate change.

To contrive a correlation between temperatures and carbon dioxide, temperatures are homogenised, as detailed in earlier posts in this series.

During the recent flooding of Brisbane, I was watching the rain gauge at Lowood on the Brisbane River (Station# 040120) just 10 kms downstream of the Wivenhoe Dam.  A total of 240 mms fell on Saturday 26th February 2022 which was a record for Lowood for any one day since August 1887; when they began measuring daily rainfall at Lowood.  Except there are not records for Lowood for the very wettest period on record in southeast Queensland, that is February 1893. It is likely that the rainfall gauge at Lowood was washed away back in February 1893!

If we consider the rainfall record for Crohamhurst that is also in the Brisbane catchment, but upstream of both the Wivenhoe and Somerset Dams, a truly staggering 2,046 mms fell between 31st January and 5thFebruary 1893.

The 24-hour record of 907 mms on 3rd February 1893 is the highest one-day rainfall total for anywhere in Australia.  We will never know if this record was equalled or beaten in February 2022 because the Bureau has closed this weather station.  It was closed in March 2003.

It is also unfortunate that despite a growing budget, and increasing concern about extreme temperatures, that the Bureau has closed the Charlotte Pass weather station which held the record for lowest daily minimum temperature in Australia.  That weather station was closed in March 2015.

The most accurate weather prediction systems rely on statistical models using artificial intelligence software to elucidate patterns in historical data.  So, the integrity of Australia’s temperature and rainfall record is paramount.

Yet both temperature and rainfall records are being constantly eroded by the Australian Bureau of Meteorology.  Important weather stations are being closed, and the available temperature data remodelled stripping away evidence of past cycles of warming and cooling that correspond with periods of drought often broken with flooding rains.   How the past cycles are removed from the temperatures series is detailed in Part 2 of this series.

There is nothing new under the sun when it comes to these climate cycles, and they continue to be perturbed by volcanic eruptions.

But we now have technocrats, bureaucrats and politicians more concerned with maintaining the illusion of catastrophic global warming than providing accurate daily or season weather forecasts.  Despite an extraordinary improvement in computing power, the bureau remains wedded to simulation models and homogenised data despite better alternatives.

Back in 2014 an investigation of these issues was proposed by then Prime Minister Tony Abbot but prevented because of intervention by Environment Minister Greg Hunt. He argued in Cabinet that the credibility of the institution/the Bureau was paramount. Greg Hunt argued that it is most important theAustralia public have trust in the Bureau’s data and forecasts, so the public heed weather warning.  No consideration was given to the accuracy, or otherwise, of these warning.

I wrote to Senator Simon Birmingham in August 2018, then the Minister responsible for the Australian Bureau of Meteorology, explaining that the Bureau’s seasonal forecasts are terrible, and I proposed solutions.  By then I had authored peer-reviewed publications detailing the skill of alternative techniques for rainfall forecasting.

The Senator never gave my proposed solutions any consideration.   I continued to forecast seasonal rainfall using artificial neural networks that are a form of artificial intelligence until early 2018, when a contract with the Queensland University of Technology (QUT) was terminated.  This followed the Bureau’s refusal to allow me to meet with them in Melbourne, as part of delegation including senior Indonesian meteorologists.  I am no longer forecasting seasonal rainfall, but would be keen to recommence with appropriate resourcing and in collaboration with the Bureau.

I was in Brisbane last Thursday afternoon (March 3, 2022), helping with the clean-up from the latest flooding of garages in Sandford Street, St Lucia.  The group I was working with insisted on downing-tools at 2pm because of the Bureau’s weather warning that described our situation as ‘dangerous’ and ‘potentially life threatening’ while repeating a severe thunderstorm warning.  The Premier of Queensland, Annastacia Palaszczuk, was broadcast across news radio urging parents to waste no time collecting their children from school.

All the while the sun kept shinning and I kept battling the mud.  Not a drop of rain fell from the sky, nor was there any thunder.   As I drove out of Brisbane that evening, on my way home, the flash flooding forecast for that same afternoon was cancelled by the Bureau.  Next, on the radio there was discussion about the ‘Rain Bombs’ of five days earlier.  How they had been ‘unprecedented’.  More than one metre of rain had fallen at some locations in just a few days.  There was no mention of the more than two metres of rain that fell at Crohamhurst in early February 1893.

This is Part 4, of the series ‘Australia’s Broken Temperature Record’.