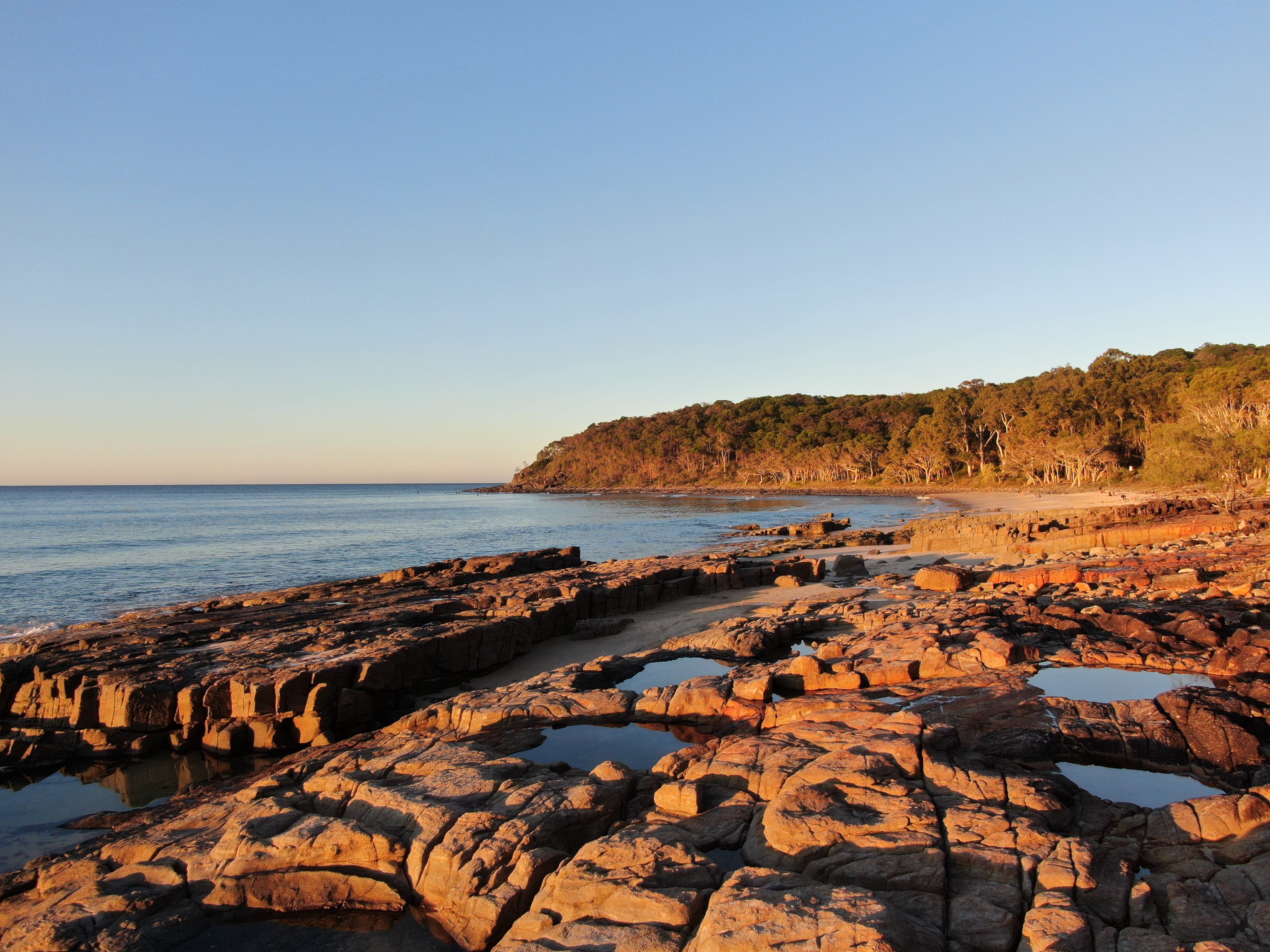 WE live at a time of so much misinformation and propaganda. What should we believe about global warming and sea level change: various claims, or what we can actually see in nature?

On Monday 7th September, I plan to show Dr Peter Ridd and Senator Malcolm Roberts evidence of a long-term trend of sea-level fall, which is etched in the shoreline at Noosa National Park.

I don’t mean that I am taking them out there in the afternoon when sea levels will fall by almost one metre over just a few hours because of the gravitational force of the moon. Rather I am referring to evidence for sea level fall over the last few thousand years, and some.

While there is much hype about a claimed 36-centimetre rise in sea level over the last 100 years, the longer-term, and more significant, trend is one of falling sea levels since at least the Holocene High Stand, and by more than 150 centimetres. Of course, sea levels were 12,000 centimetres (120 metres) lower just 16,000 years ago during the depths of the last ice age. During the time of the dinosaur’s – sea levels were more than 10,000 centimetres higher (100 metres) than they are now. Sea levels are always changing – on daily and also millennial time scales.

There is a cliff face immediately below the Boiling Pot Lookout, which is just beyond the main car park at the official entrance to Noosa National Park. Below the lookout, to the south, there is a wave-cut platform. A group of us went and stood on it during the highest astronomical sea tide this year, which was on Monday 10th February, and the waves did not get to the base of the cliff face – we weren’t washed away!

Such cliff faces are formed where the cutting action of waves brings down great lumps of rock from above. The debris is then removed by the wash, and the headland recedes landward as the sea eats into the cliff face creating what are called wave cut notches.

That this platform, and the notch, is above the highest tides is evidence that the longer-term trend is one of sea level’s falling, not rising. If sea levels were rising, we would have been washed away when we stood on that platform at the time of the highest tide, particularly given that morning was coincided with an offshore low that further elevated sea levels.

Tea Tree Bay, just a bit further along the path into Noosa National Park, has interesting wave cut platforms of sandstone, with abrasions called marine potholes. Potholes are generally thought to be formed by the relentless grinding of harder rock – perhaps granite – caught in a depression in softer sandstone. Pounding surf causes the harder rock to swirl round and round, grinding around and also down.

The grinding that created the potholes at Tea Tree Bay could only have happened when sea levels were higher, when this platform was between the high and low water mark. For as long as I have visited this bay, it is only the highest tides that splash some water into the marine potholes. Last December they were full of freshwater and breeding tadpoles of the green tree frog.

This is further evidence that sea levels have fallen. But since when?

HOW OLD ARE THE MARINE POTHOLES AT TEATREE BAY

I received an email from a British geologist not so long ago, he wrote:

The thing that really catches my eye is the fracture pattern that goes around the ring of the pothole.

What is the geological age and nature of the sedimentary rock?

The fracture patterns are polygonal which suggests a fine-grained colloidal mudstone.

The fractures around the ring also imply the existence of a pre-existing body, possibly a fossilised tree trunk or if the rock is pre-carboniferous in age a stromatolite?

The pothole will therefore have exhumed this fossil sediment which we can assume had a different sedimentary infill.

Note the pattern of dimples round the pothole which, if this is a Jurassic age sediment could be due to the presence of roots of Taxodium sp.

So, the almost perfectly circular pothole was perhaps once a fossilised tree trunk, and it may date to the time of the dinosaurs!

There is a sign at Hell’s Gates, right at the end of that path through Noosa National Park, that explains the sandstones in the national park date to about (if I remember correctly the sign says, I can check on Monday) 120 million years ago.

I know that the dolorite rock intrusion to the north of Granite Bay, on the way to Hell’s Gates, has been dated to 145 million years. And the general consensus, including at Wikipedia, is that sea levels were a lot higher back then.

Really the only constant in life is change, along with sea levels!

Some may claim that 145 million years ago is not a relevant time scale. So, when should history begin? I have been visiting Noosa since I was about ten years old, and now I live here. I’ve been looking for evidence of sea level rise for as long as I can remember, and I haven’t been able to see any: that is over the last 47 years.

There is a Sonel.org GPS reference station at Bundaberg (just to the north of Noosa) and Brisbane (just to the south). These indicate that there has been some land subsidence at a rate of -0.8mm/year and -1.8mm/year, respectively.

I’m guessing this is soil subsidence rather than crustal bedrock subsidence, but I’m happy to be corrected. Either way if there is such subsidence also occurring at Noosa, this reinforces my point that sea levels in the relatively recent past must have been higher to create the potholes at Tea Tree Bay and the wave-cut notch below Boiling Point.

OTHER INFORMATION AT THIS WEBSITE/BLOG

Pictures and commentary about the highest astronomical tide this year, and showing that the waves didn’t get to the base of the cliff face can be found here: https://jennifermarohasy.com/sea-level-change/ with map.

About sea level change and the marine potholes: https://jennifermarohasy.com/2019/12/what-can-you-see-indicating-sea-levels-are-rising/

About sea level changing with El Ninos and at Darwin:
https://jennifermarohasy.com/2019/07/sea-level-fall-at-the-great-barrier-reef/

Considering the coastline in these pictures taken from my drone:
1. When are the sandstone platforms likely to have been cut by the waves?
2. Would the rock platform with the potholes have been cut during the last inter-glacial period from perhaps 140,000 to 120,000 years ago, or much earlier?

I understand that sea levels were about 2 metres higher 120,000 years ago, and about 1.5 metres higher 6,000 years ago. According to Warwick Willmott’s book entitled ‘Rocks and Landscapes of the Sunshine Coast’ the headlands of Noosa, Coolum and Point Cartwright were islands during the last inter-glacial. In between this last-interglacial and the beginning of the Holocene (some 11,600 years ago) we had a fall in sea levels of about 150 metres along the Sunshine Coast – I’m quoting again from Warwick Willmott.

Howard Brady sent me a list of peer-reviewed articles some time ago, with a note:

“There is evidence of a gradual fall (not rise) from a high sea level stand between 8000 and 2000 years BP [before present]. Such evidence comes from an increasing number of peer-reviewed articles describing evidence of this high sea level stand and its decline along the coasts of Australia, South Africa, South America, South Korea, and Vietnam.
There is increasing evidence that such a wide occurrence of a high sea level stand, especially in the Southern Hemisphere, cannot be interpreted as due to crustal movements (Glacial Isostatic Adjustments -GIAs) in different continents at the same time as these areas did not experience any significant glacial or ice crustal loading during the last ice age advances.

Basically, there is now so much data on this fall in sea level from a high-level stand that the GIAs quoted by Dutton and Lambeck (2012) should be abandoned. A few references to peer reviewed articles describing a high sea level stand in the HTM and the fall in sea-level from 8000 -2000 BP are listed below. There is no justification for any glacio-eustatic uplift since 8000 BP that stopped (for some unknown reason about 2000 BP) in regions that did not experience any ice loading during the last glaciation.