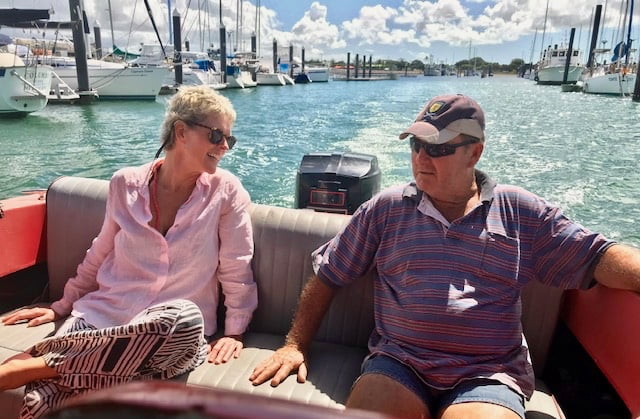 Exactly one year ago yesterday, I was getting off a train in Proserpine, looking to pickup a hire car to drive to Bowen. I wanted to know if the coral there was all dead, or not. Bowen is a coastal town in North Queensland, not far from Abbott Point that is the coal terminal for the controversial Adani coal mine.

Judge Salvador Vasta had earlier that week handed down his findings regarding the sacking of Peter Ridd. He had exonerated Ridd and explained that James Cook University had wrongly sacked him.

Some claim that it all came to a sorry end for Ridd because he dared to question the consensus of scientific opinion concerning the health of the Great Barrier Reef – particularly the impact of global warming. The university claimed it was because he had become ‘un-collegial’ and did not follow various directives while disclosing confidential information.

These issues were argued in the Federal Circuit Court in Brisbane a month earlier, in March 2019. Very few people realized that at the heart of the case were a couple of what might be best described as fake-news photographs promoted by Terry Hughes.

This is the same Terry Hughes who is now claiming that 60%* of the Great Barrier Reef has been bleached, and that this is an extraordinary catastrophe for which we should all be ashamed.

If Peter Ridd had become un-collegial and disclosed confidential information, it was because he was fed-up with the fake news. As Ridd wrote in chapter 1 of the book that I edited three years ago, a chapter entitled ‘The Extraordinary Resilience of Great Barrier Reef Corals, and Problems with Policy Science’:

I have carried out half-a-dozen audits on some of the science claiming damage to the Great Barrier Reef, and in every case I have discovered serious problems.

The first of the 21 findings handed down in the Federal Court by Judge Vasta one year ago, concerned photographs used by Terry Hughes to claim that the corals off Bowen had been variously destroyed by global warming, ocean acidification and sediment run-off. Hughes claimed where there had once been healthy coral reef, there was now only mudflat.

The most recent claims from Hughes, that all of the Great Barrier Reef is at risk from global warming, do not follow close-up examination of individual corals or even individual reefs. Rather Hughes has flown in a light plane in all sorts of conditions through the day even when it was windy, and looked down from a very high altitude, from some hundreds of metres away.

His claims are being uncritically reported as fact across the world, including in popular scientific magazines.

I’ve flown a drone at 30 metres above a coral reef and spotted white corals. I’ve snorkelled that same reef and found the same white corals to be very much alive and with zooxanthellae. I made a film of this adventure, documenting its health for that moment in time. That was in August 2019. I named that reef and the film: Beige Reef. You can see the white corals from the drone footage at 9.38, 10.35 and 11.07 minutes.

Beige reef fringes the north facing bay at Stone Island, which is across the channel from Bramston Reef at the entrance to Bowen Harbour.

The white corals were large; they are commonly known as bolder corals, and the species at Beige Reef was Galaxea fascicularis. I made this identification based on information in J.E.N. Vernon’s three-part encyclopedia ‘Corals of the Worlds’ using my close-up photographs of the extended tentacles. These were taken on the same day that I took the drone footage showing these same corals as white in the film Beige Reef.

If we go back eight years, to July 2012, it is a fact that Terry Hughes stood in front of 2,500 marine scientists at an international conference in Cairns and claimed the corals off-Bowen are dead. That claim, made while showing a picture of the mudflat at Bramston Reef just to the south of Bowen, was a front-page story the next day in The Cairns Post.

Peter Ridd had some photographs taken in 2015 showing healthy corals off-Bowen, he got sacked for this effort. To back-up Terry Hughes, Tara Clark from the University of Queensland and colleagues (including David Wachenfeld from the Great Barrier Reef Marine Park Authority), had a paper published by the prestigious journal Nature claiming that there are no-longer any Acropora spp. corals at Stone Island. In the film Beige Reef, I show 25 hectares of this coral type. I made Beige Reef to back-up Peter Ridd.

I don’t know of a single journalist prepared to visit Bowen, Bramston Reef, Beige Reef or Stone Island to check the veracity of the claims by me and Peter Ridd versus Terry Hughes or Tara Clark. Yet it is not complicated, though it will be political. The saga has been on-going since at least 2015.

Jennifer Marohasy: come visit the reef with me, Misha Ketchell

Exactly one year ago, keen to see for myself I walked across that mudflat at low tide, after catching the train to Proserpine and then driving up to Bowen. I walked across the mudflat on the afternoon of Easter Friday in April 2019, and kept going for about 1 kilometre. I found so much live coral, the other side of that mudflat.

Having the boat that McCulloch towed down from Cairns made it possible for us to get all around Stone Island. As it turned-out we found several coral reefs fringing Stone Island, including Beige Reef with all the Acropora spp.. To be clear, there is not just coral the other side of the mudflat at Bramston reef, but all-around Stone Island that is just across the channel from Bramston Reef.

Surely it’s time journalists and their editors took some responsibility for the information that they republish? It seems they take anything provided by particular academics that fit a narrative, and give it a free run.

So far, Hughes has not published this most recent aerial survey in any peer-reviewed journal, or even made available a list of the locations with bleached corals. No doubt he will in due course. Then we will probably see a second wave of uncritical reporting by the mainstream media, again claiming the imminent demise of the Great Barrier Reef. The bottom-line seems to be that we live at a time when the dominant narrative demands an ecological disaster. It is as though almost anything that can be imagined, and told as a story by academics, can become a news headline. There is no checking.

I can only ask that ordinary folk be ever sceptical of such stories. Scepticism should be worn as a badge of honour, particularly in these times when it can be so hard to know whether there really is a coral catastrophe, or not. How can we find the truth, when even Nature publishes incorrect reports: claiming there are no Acropora spp. corals at Stone Island where I found and filmed 25 hectares on 27 August 2019.

Quoting from an ABC News story:
Great Barrier Reef found to be coral bleached from north to south for first time
By national science and technology reporter Michael Slezak and the specialist reporting team’s Penny Timms
Updated Tue at 9:52am

“The Great Barrier Reef is currently experiencing the most widespread bleaching ever recorded, with 60 per cent of reefs across all three regions affected, according to a detailed survey of the system.

1. Warmer sea temperatures have led to coral bleaching along the length of the Great Barrier Reef

2. More coral reefs were bleached in 2016, although the damage was concentrated in the north

It is the third mass bleaching event on the reef in five years — a phenomenon primarily caused by greenhouse gas emissions, and one that had never been recorded before 1997.

“We were hoping that this year would be a relatively mild bleaching event, but unfortunately that’s not the case,” said Professor Terry Hughes, head of the ARC Centre of Excellence in Coral Reef Studies.

The image at the very top of this blog post is of Matt and me on Easter Monday 2019, heading out to Middle Island from Bowen Marina. Much thanks to John Barnes for organising this adventure, and for taking the photograph.