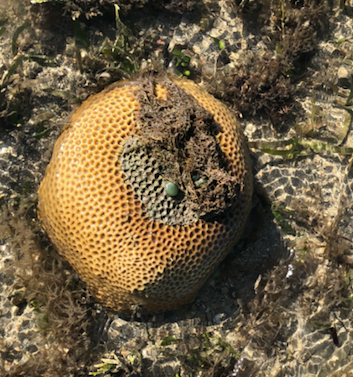 The coral reef off Bowen, in North Queensland, is only dead to the 2,500 marine scientists who attended the conference in Cairns on 9th July 2012. That day, they were shown photographs of a mudflat … and told that mud now covers what was once healthy coral reef, and that this reef off Bowen is an example of the “sad decline” of the Great Barrier Reef.

The photographs shown by Terry Hughes on that day were misleading.

There is still a lot of coral off Bowen. At Bramston Reef it is more than one kilometre off shore, beyond the mudflat, and beyond the reef flat – both of which are teeming with life.

This is the littoral zone: the area between the highest and lowest tides once of so much interest to biologists. But like so much of our natural history it is being denied by the doomsayers and activists who now manage the narrative and seem completely averse to a bit of mud. They seem to expect the entire shoreline to be covered in bright corals with Nemo swimming around, but this was never the case.

Yesterday, on the very lowest tide of this month, I walked across an expanse of mudflat and then sandy reef flat before finding myself blocked by Acropora coral, which would normally be underwater. I could see massive Porites just out of the water in the distance. But the tide was turning, and so I headed back.

I took photographs along the way of the many creatures that inhabit this littoral zone – that is not all covered in mud, but some of it is and that is not bad.

For years, photographs of just the mud flat with a view across to Gloucester Island (with Stone Island to the left in the foreground, of the next video), have been paraded as evidence of “devastated coral reefs” – including by Terry Hughes at that conference.

The photographs are just of the naturally muddy, what some would call “back reef”. Beyond that is an area of perhaps 900 metres dominated by coarse carbonate sands, and beyond that corals for perhaps 800 metres to the seafloor. Yesterday I walked across the mud flat and reef flat to the corals.

The most high-profile Great Barrier Reef researchers have denied the existence of the reef flat and then the corals at Bramston reef, which they variously confuse with the fringing reef at Stone Island. It is a shame. It suggests a high level of incompetence.

Bramston reef was probably at its most expansive and spectacular about 4,500 years ago when sea levels were about 1.5 metres higher (yes, higher). That was during the Holocene high stand.

Back then there would have been rapid vertical growth of the reef. By 3,000 years before the present, the reef was probably backfilling with the sea-level fall creating fossil microatolls.

That there is limited potential for vertical growth at present, has everything to do with the lack of sea level rise. Sea levels did come up over 100 meters between about 16,000 and 10,000 years ago! The climate is always changing. Indeed climate change began long before the industrial revolution.

It is confusing to me that while sea level fall is an un-controversial fact in the technical literature, there is so much concern about the perhaps 36 cm rise since about 1880 along the Queensland coast. Indeed, what is written in the newspapers is impossible to reconcile with what is in the technical, scientific literature. This is often the case with climate issues.

At Bramston reef the difference between high and low tide at this time of year is more than three metres. There will be much more coral exposed in August, when we get the very lowest tides for this part of the Earth for this year – and I’m planning to return then, to get more photographs, including of the corals.

********
The feature image (very first photograph, at top) is of a young Porites coral growing around mud on the reef flat taken by Jennifer Marohasy on 19th April 2019.