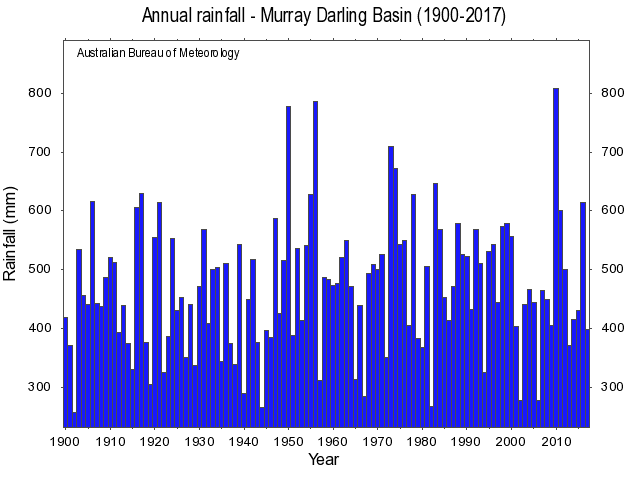 After years of telling skeptics that you don’t ask a plumber to do heart surgery, the ABC “Weather Alert! last Monday was 90% plumbers.

The formerly iconic FourCorners “public affairs” show crafted a 43 minute advertisement for the Renewables Industry and Carbon Trading Bankers and the Green Blob. And we taxpayers paid for it all.

This very amusing blog post by Jo continues with much more to contemplate about the extent to which politics now rules when it comes to the mainstream media and the topic of climate change.

The program was full of factual errors.

Melbourne-based, retired mechanical engineer, Bob Fernley-Jones highlights some of these factual errors in a formal complaint that he has already lodged, and it has already been assigned a case number C10545-18. With Bob’s permission I provide the text and graphics from this complaint…

Complaint summary: The programme presented various anecdotal claims associated with recent severe weather events that prima facie seemed to be far-fetched. When those claims were subjected to the simplest of validity checks they were found to be false and very misleading. Also, important information that is available from various authoritative sources but that was opposite to the dramatically orchestrated programme agenda was excluded.

A simple Google search for ‘Summer frost NSW Australia’ yielded 428,000 hits, but nothing of relevance was found. A similar search for ‘hot winter day NSW Australia’ yielded only a report of a single warm day of 26 0C in Sydney in July 2017. However, Sydney is incomparable climatically because Braidwood is located at an altitude of about 690m (2,250 feet), in The Tablelands east of Canberra.

So, what does the Bureau of Meteorology (BoM) have to say? Quite a lot actually. They opened a weather station at Braidwood Racecourse in 1985, and:

There was a solitary rather cold overnight Summer minimum of 2.3 0C on the 17/Feb/2017, but it was consistently colder in past decades (figure 1).

MARTIN ROYDS: Yes we have 130 years of rainfall and temperature graphs. Since 1985 to now, the temperatures have been increasing .8 of a degree per decade. So, in that thirty year period, it’s gone up 2.4 degrees, maximum temperature.

However, that would be an eight-degree rise per century, or implausibly about eight times greater than the Australian average as stated by the BoM’s Dr Braganza at 5 video-minutes. Also, the BoM data show no discernible warming trend in the summertime maxima at the racecourse (figure 2).

“MICHAEL BRISSENDEN: All around the district the dams have been drying up… Braidwood slipped into drought once again and it’s taking a heavy toll on the local farmers.”

However, the available BoM rainfall data for the Racecourse reveals no discernible rainfall reduction trend since 1985 and nothing unusual in annual variability apart from a drier period in the 1990’s (figure 3).

He runs a business which provides accommodation for up to 52 people to “Live, Learn, Relax at Tombarra” to engage in conferences and workshops etcetera focussing on land and environmental matters. The possibility that he might gain financial benefits from the claims made above should have caught the notice of any nonaligned investigative reporter.

“Tonight fires break out across the state as Sydney sizzles and the mercury soars, with Penrith recording its hottest day ever at 47.3 degrees.

This claim became rapidly obsolete in the media with widespread correction of a mistaken early tweet from the BoM. Again, your investigative reporter apparently failed to do a quick online search for ‘Penrith 47.3’ or the like. Maurice Newman, a former Chairman of the ABC put it rather succinctly in The Australian:

“…according to Australia’s Bureau of Meteorology, little old Penrith in Sydney, Australia, was the warmest spot on the planet, recording its highest temperature ever, having “broken the all-time maximum temperature record for … the Sydney metropolitan area”. Well, perhaps in all that excitement the bureau can be forgiven for overlooking the fact Penrith Lakes started recording temperatures only in 1995 and for missing a much higher temperature recorded in nearby Richmond in 1939. But they were right. It was hot.”

“Queenslanders have suffered through temperatures at least 10 degrees above average as the heatwave sets in for the weekend.

The claim of “at least 10 degrees above average” is again severally misleading including that sparsely populated areas in the hot centre have a long history of very high fluctuations in temperature that were more severe than those of late. Your programme failed to reveal the proper perspective of various less alarming reports such as in the Brisbane Times on 15/Feb/2018 (even though it too is partly exaggerative or mistaken when compared with the relevant BoM databases):

“[BoM] forecaster Sean Fitzgerald said much of Queensland recorded temperatures above 35 degrees during the week.
In particular, out west is where it is very very hot – temperatures out there are at or exceeding 40 in some places, so quite a bit above average,” Mr Fitzgerald said.

Records were also broken in Winton in central-west Queensland which recorded 46.5 degrees on Wednesday, breaking a February 28, 2016, record of 45.5* degrees, while a couple of hundred kilometres south, in Richmond, a 1983 record of 44 degrees was broken when the town hit 44.5 degrees.”
However, when the BoM databases are examined, all six stations cited were relatively cool in recent times. (e.g. figures 4, 5, 6)

Mistakenly, the forecaster’s statement about Richmond is strongly contradicted in figure 3, and, although the stated 45.5 in 2018 is apparently OK, one of the corrective BoM tweets on the saga in 2.1 above admitted that it was 2.3 degrees hotter in 1939. Also, the Winton, Roma and Toowoomba examples only have short records that are incapable of providing long-term trend determinations. Moreover, Winton’s 45.5 in 2018 did not break the record high of 46.9 on 1/Dec/2006 anyway!

“The state’s public transport system and power supply have come under pressure as Melbourne baked through its hottest day in two years.

So, a single 41.7 0C day in Melbourne is hardly a big deal but it is dressed-up to be a sign of pending doom. * Catastrophic bushfires driven by extreme winds from the hot interior.

Please advise what corrective action will be taken over the seriously misleading statements in all of these seven points, and over failure to check their validity or provide balance.

Ends. [This is the extent of the text and charts as provided by Bob, and I thank him for letting me putting them on the public record here.]

I would encourage others with a strong empirical background to also lodge formal complaints.

An underlying theme of the Four Corners program is that the general situation across Australia is one of declining rainfall. In fact, while the overall trend for south western Australia, the example provided in the program, may be one of decline, in many other areas there has been record high rainfall over the last decade. For example, the highest recorded annual rainfall total since 1900, for the Murray Darling Basin, was in 2010.

Also, last week, I blogged on the issue of the unreliability of the temperature measurements as narrated by Michael Brissenden in this Four Corners program.