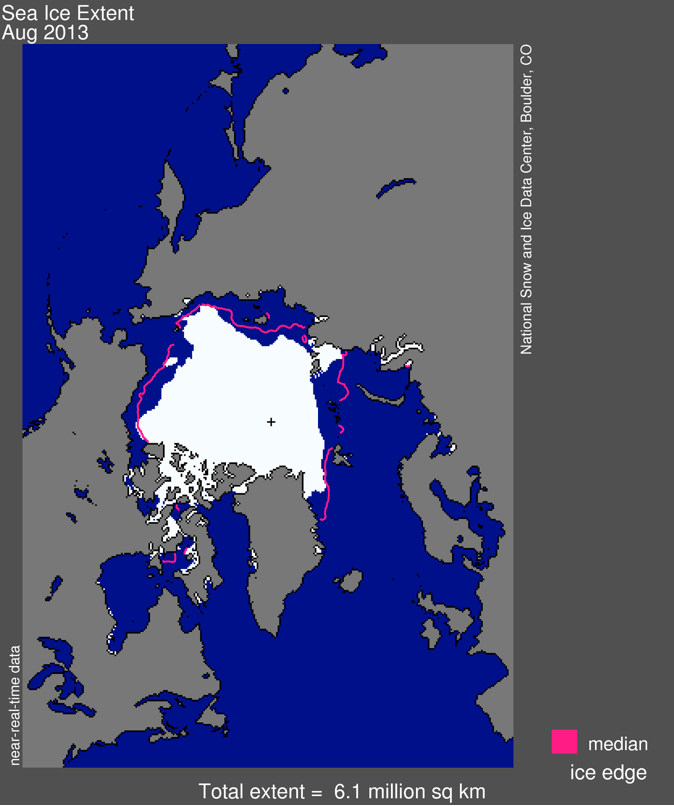 Various media have been reporting that in the Arctic about a million more square miles of ocean are covered in ice this August than just last year. This is apparently an increase of 60 percent. 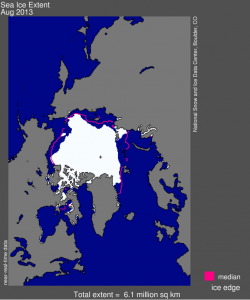 August is usually a low point in the annual cycle, and not so many years ago some were predicting the Arctic would be ice free by August of this year, by 2013.

But if you consider the longer millennial-scale temperature trends as detailed in the technical literature, it is one of summer insolation declining through the Holocene, summer temperatures being generally cooler and the area of Artic ice expanding.

“As the planet cooled from peak warmth in the early Cenozoic, extensive Northern Hemisphere ice sheets developed by 2.6 Ma ago, leading to changes in the circulation of both the atmosphere and oceans. From w2.6 to w1.0 Ma ago, ice sheets came and went about every 41 ka, in pace with cycles in the tilt of Earth’s axis, but for the past 700 ka, glacial cycles have been longer, lasting w100 ka, separated by brief, warm interglaciations, when sea level and ice volumes were close to present. The cause of the shift from 41 ka to 100 ka glacial cycles is still debated.

“During the penultimate interglaciation, w130 to w120 ka ago, solar energy in summer in the Arctic was greater than at any time subsequently. As a consequence, Arctic summers werew5 C warmer than at present, and almost all glaciers melted completely except for the Greenland Ice Sheet, and even it was reduced in size substantially from its present extent. With the loss of land ice, sea level was about 5 m higher than present, with the extra melt coming from both Greenland and Antarctica as well as small glaciers. The Last Glacial Maximum (LGM) peaked w21 ka ago, when mean annual temperatures over parts of the Arctic were as much as 20 C lower than at present.

“Ice recession was well underway 16 ka ago, and most of the Northern Hemisphere ice sheets had melted by 6 ka ago. Solar energy reached a summer maximum (9% higher than at present) w11 ka ago and has been decreasing since then, primarily in response to the precession of the equinoxes. The extra energy elevated early Holocene summer temperatures throughout the Arctic 1e3 C above 20th century averages, enough to completely melt many small glaciers throughout the Arctic, although the Greenland Ice Sheet was only slightly smaller than at present. Early Holocene summer sea ice limits were substantially smaller than their 20th century average, and the flow of Atlantic water into the Arctic Ocean was substantially greater. As summer solar energy decreased in the second half of the Holocene, glaciers reestablished or advanced, sea ice expanded, and the flow of warm Atlantic water into the Arctic Ocean diminished. Late Holocene cooling reached its nadir during the Little Ice Age (about 1250e1850 AD), when sun-blocking volcanic eruptions and perhaps other causes added to the orbital cooling, allowing most Arctic glaciers to reach their maximum Holocene extent. During the warming of the past century, glaciers have receded throughout the Arctic, terrestrial ecosystems have advanced northward, and perennial Arctic Ocean sea ice has diminished…

Image of sea ice extent from http://nsidc.org/arcticseaicenews/. Click on this image for a larger and better view.