IN June 2011 the Australian government halted all live cattle exports to Indonesia after ABC Four Corners broadcast disturbing footage of Australian cattle being mistreated in Indonesian abattoirs. As I wrote in May 2012, Australians were lead to believe that this footage, that shocked the nation, was typical of what occurs inside many abattoirs in Indonesia and that the footage was taken by Lyn White from Animals Australia [1]. However, according to British filmmakers Gem and Ian from ‘Tracks Investigations’ they were responsible for the footage that sparked massive public opposition [2]. Nowhere in the Four Corners program is the involvement of these professional filmmakers declared; activists who for a fee “offer a comprehensive global investigation and film production service to conservation, environmental and animal protection groups.”[3] 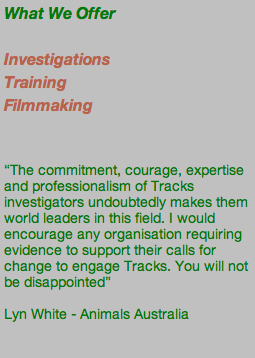 In the following email, which Sarah Ferguson from ABC Four Corners has asked me to publish, she explains that my recent column in The Land on the same topic is “mischievous” [4]. In particular she claims a first hand knowledge of the situation in Indonesia and that half the abattoir footage in the program was filmed by Four Corners.

Ms Ferguson does not explain, however, whether, any of the footage of animal cruelty in the abattoirs as shown on the program was taken by Four Corners.

Re your article “Tracks lead to theatre of abattoir footage”. This article must have been written without watching the program it is commenting on.

The Four Corner’s program, “A Bloody Business” is available to view on line at this address and has been at all times since the original broadcast.
http://www.abc.net.au/4corners/content/2011/s3228880.htm

These are the facts. Half of the abattoir footage in the program was filmed by Four Corners, half by Animals Australia.

In early 2011 Lyn White from Animals Australia brought extensive footage to Four Corners that she had just filmed in Indonesia. The footage was accompanied by a detailed scientific analysis by the RSPCA. White told us what she told the subsequent Senate enquiry in publicly available testimony that she had filmed with a fellow investigator from the UK based Tracks organisation. White brought us hours of footage, shot with two cameras, one operated by Lyn White, one by her colleague. This approach meant her footage was high quality with very good coverage of each scene. In the broadcast Lyn White describes the scenes she filmed and the experience of witnessing the cruelty in those scenes.

Having viewed their footage, Four Corners conducted its own investigation in Indonesia. The first abattoir we filmed at was Gondrung in Jakarta. I am shown in the abattoir during that sequence and throughout the program on the journey through Indonesia.

You refer to the abattoirs featured as being “rogue operators.” The abattoirs in the program are not rogue operators. We had footage of at least 13 abattoirs across the country, all of which had received recent training and supervision from the Australian live export industry. They were all using Australian supplied restraining boxes which Australian experts had taught them to use. The first abattoir we visited at Gondrung was one of the biggest mid level abattoirs in the country. It had received 6 advising/training visits from Meat and Livestock Australia in the past 14 months. Further to that we had internal industry documents referring to similar treatment of animals at these and other abattoirs. We also showed the excellent operations of a big stunning abattoir in Java to show what standards could be achieved in Indonesia.

The footage was viewed for the program by the world’s leading expert on cattle behaviour (and a regular consultant to Australian industry) who was appalled by what she saw, both the treatment of cattle and the construction of the Australian supplied equipment.

The footage was easy to get in the sense the abattoir owners allowed the filming that we showed. The abattoir owners and slaughter men did not try to hide the treatment of the animals which strongly suggests they regarded it as routine. It is offensive to suggest that I, my camera team or Lyn White would set up or cause animals to be mistreated. Once again if you had seen the program you would know this could not be the case.

The Tracks investigator worked for Lyn on her portion of the filming. It is mischievous to claim her testimonial says the filming was not her own. It does not say that.

Above all there is no substitute for watching the program, especially before writing about it.*

I trust you will correct the record.

The Four Corners program flicks from showing acceptable practice in abattoirs to truly gruesome images without any attribution of the source of the footage.

It is common practice for some animal rights activists to perform stunts, and also stage, enhance or only selectively release footage to get a particular message across to viewers.

Given that it appears Four Corners used footage from Tracks Investigations this should have been declared. But not even in the long introduction to the program given by Kerry O’Brien is mention made of the involvement of these professional filmmakers and animal rights activists. These are filmmakers who appear to have been commissioned by Animals Australia to travel to Indonesia to get the footage that was subsequently passed on to Four Corners and incorporated into the ABC TV program that resulted in the suspension of live cattle export to Indonesia.

If Ms Ferguson and ABC Four Corners are serious about clarifying the situation then they must at the very least provide us with a scene by scene breakdown of the origin of the footage shown in the program. If Ms Ferguson and the ABC now release complete details of the location and date of each scene, this will assist a public assessment of the veracity of the evidence presented. Failure to comply with this request would suggest there is a lack of transparency in the process leading to the acquisition of the visual evidence broadcast in the program.

According to Scot Braithwaite, an Australian who works in feedlots and abattoirs in Indonesia the Four Corners program showed ‘expert manipulation’. In a letter from Mr Braithwaite that I published in June 2011 he claims to have witnessed thousands of animals slaughtered in Indonesian abattoirs and that 98 per cent of the time the kill is quick and without fuss [5].

*Contrary to this false claim from Sarah Ferguson I have watched the program and read the transcript.

1. Who filmed the video clip of Australian cattle in the Indonesian abattoirs?
http://jennifermarohasy.com/2012/05/who-filmed-the-video-clip-of-australian-cattle-in-the-indonesian-abattoirs/

5. Asking for a Fairgo for Live Export: Scot Braithwaite
http://jennifermarohasy.com/2011/06/asking-for-a-fairgo-for-live-export-scot-braithwaite/

6. The quote from Lyn White presented above as green text in the breakout box is from the Tracks Investigations website… downloaded today.