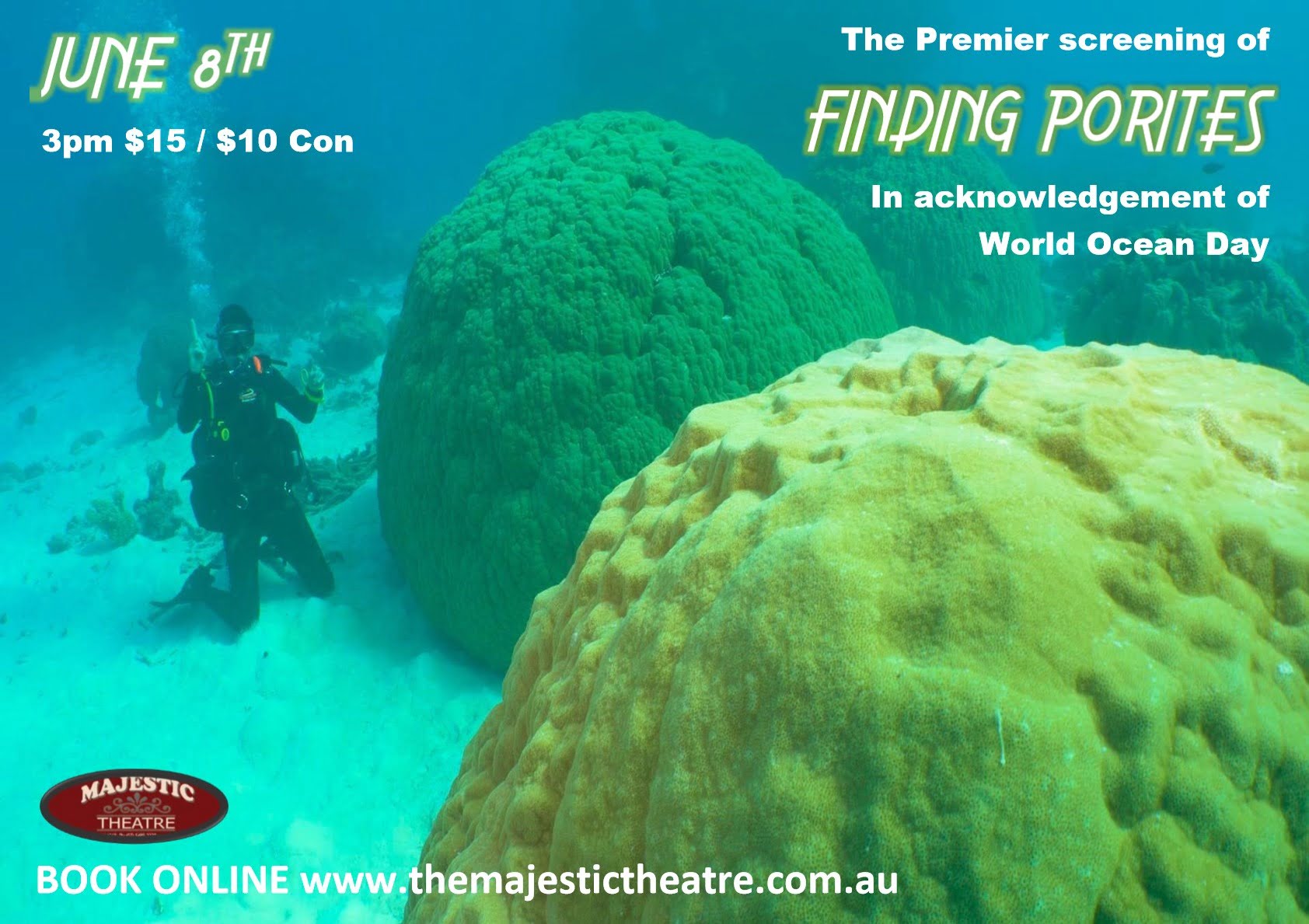 Marlin fisherman Rob McCulloch, and I, talked about going searching for the monster corals. I wanted the skipper to take me all the way to Myrmidon Reef, where I knew The Australian Institute of Marine Sciences had once cored these largest Porites. Peter Ridd had told me some of the stories.

Underwater cinematographer Stuart Ireland agreed to come with us, and helped turn this adventure into a film. I had a shot list, that Stuart noted, and then expanded on. He not only filmed non-stop underwater, but took so much drone footage and recorded interviews and also me when I emerged so excited from the dives.

Our short film, Finding Porites, will premiere at the local Majestic Theatre on 8th June. And we now have a short 45-second trailer:

People generally think of corals as delicate and vulnerable, perhaps thin, branching and colourful – easily smashed by large waves during storms, and even worse during cyclones. Then there are the bolder corals that have the scientific name Porites. These monster corals are domed or helmet in shape, and can grow to 10 metres in diameter of dense calcium carbonate so an individual colony weights more than a bus! These are resilient corals that are the foundation of many coral reefs. They have annual growth rings, like tree rings, and so they are time capsules of the ocean’s history.

The Australian Institute of Marine Sciences used to calculate an overall growth rate for the Great Barrier Reef based on coring these corals with the oldest core dating to the year 1572. So, there was more than 400 years of climate history in this coral.

The prediction back in the 1980s was that as global temperatures increased so would coral growth rates. But forty years later we don’t actually know. Because AIMS changed their methodology for coring the massive Porites corals after 1990, and then, after the error was pointed out by recently sacked University Professor Peter Ridd in a study published in Marine Geology (volume 346), AIMS stopped this coring work altogether.

I was repeatedly told the coral coring work had stopped, not because of Peter’s published study but because all the really large and old Porites are now dead from coral bleaching.

It was in October last year, just after Professor Terry Hughes from James Cook University came out with yet another study claiming half the Great Barrier Reef is dead, and just after the skipper (Rob) told me he had no charters/no work because of Queensland border closures due to Covid, that I convinced IPA Executive Director John Roskam to let me go to sea with Rob and two other Marlin fishermen (Wizzy and Denis) to see if we could find the large old Porites – the type of coral that Peter Ridd wished AIMS would core so that we had up-to-date data on coral growth rates.

Marine biologist, and underwater cinematographer Stuart Ireland did agreed to come and film whatever we found. The day before we departed Cairns, Stuart introduced me to Shaun Frichette, a conservationist and deep-sea diver from California who had heard the reef was dead and dying and was keen to come see for himself.

At that lunch I learnt that Shaun didn’t eat fish – he explained that his life mission was to save marine life, not consume it.

Shaun nevertheless was keen to come on the fishing boat, understanding the three Marlin fishermen taking us to sea for a week were as committed as Stuart and me to finding the Porites and knowing the true state of these corals. Shaun just wouldn’t be eating any of the fish we caught along the way! The story of that week at sea together is told in our new film.

The film includes never-before-seen archival footage of AIMS scientists coring one of these monster corals with an hydraulic drill under the sea, and then extracting a core.

I am so excited that this 22-minute documentary will premiere at The Majestic Theatre in Pomona on World Oceans Day – Tuesday, 8th June 2021. I so hope you can make it!

Purchase your tickets at https://www.trybooking.com/events/landing?eid=766421&