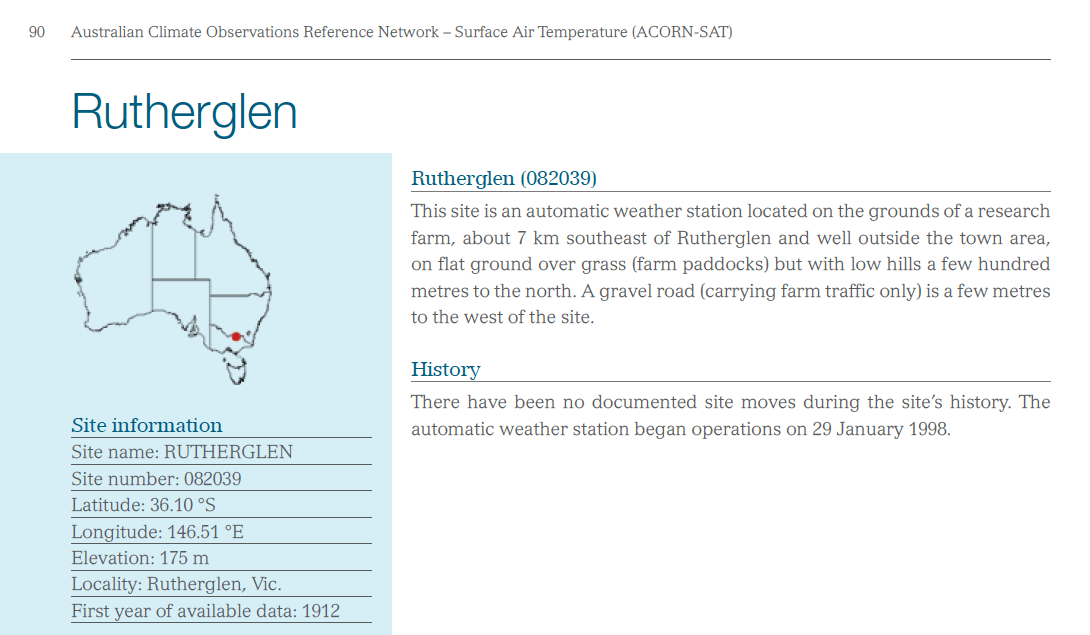 THE Bureau of Meteorology has spent several weeks looking for documentation to support its recent claim that, contrary to what is written in its published station catalogue, the weather station at Rutherglen was once moved. 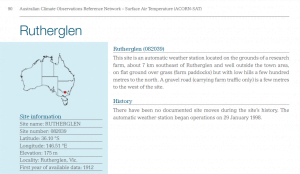 The Bureau hasn’t been able to find any actual documentation to verify this move. But this hasn’t stopped it nevertheless concluding that there was a station move and publishing a document, not in the peer-reviewed literature, but on the Internet to conclude that the weather station was once moved between paddocks.

Furthermore, but not even published on the Internet, this move between paddocks, that could have occurred in 1966 or even 1974 apparently justifies a drop down in minimum temperatures, with the largest change a 1.8 degree Celsius difference between recorded and homogenised temperatures for Rutherglen in 1913. The net effect on the temperature trend is the creation of a 1.73 degree Celsius per century warming, where previously there was a 0.35 degree C per century cooling in the minimum temperature series.

It makes no sense!

But it hasn’t stopped the alarmists on Twitter and at HotWhopper claiming the Bureau was right all along: the weather station had moved, there are maps and photographs and conclusions, just no actual documented evidence. Indeed it doesn’t seem to have occurred to Lotharsson and the rest of the HotWhopper cheer squad, that if the Bureau was able to find inspection reports, requests for replacement equipment and more, that there should also be documentation if the station had actually been moved!

Of course it may have been moved, and the documentation may have been lost, but that still doesn’t justify the change in magnitude and direction of the temperature trend for Rutherglen that the Bureau has made.

My colleague, Bill Johnston, has forensically examined the temperature data generated by the weather station at Rutherglen. Dr Johnston is of the opinion that it is possible that there was a site move in 1965. He can find a break in the data at this time. But even accounting for this, there is no overall warming trend in the data either side of this break. So, Dr Johnston has concluded after running three independent statistical tests over the data, that it is the Bureau that has changed the data, resulting in a bias in the data series where none previously existed.

HotWhopper haven’t actually examined the data, or thought about whether moving a weather station between paddocks in a relatively flat rural terrain could cause a change in the direction and magnitude of the temperature trend. They are just celebrating that the Bureau could publish on the Internet claiming a site move.

According to HotWhopper, quoting the Bureau, the need for an adjustment to the Rutherglen data was made through the application of, “an objective statistical test that showed an artificial jump in the data during this period” prior to 1966.

In fact statistical tests cannot show “artificial jumps”. What empty heads they are at HotWhopper and the Bureau!

Statistical tests can detect breakpoints in temperature series. These may be attributable to climatic or non-climatic factors.

The Bureau claims that, 1966 and 1974 dates match the two breakpoints in minimum temperatures through a “statistical comparison of its [Rutherglen] data with other site data in the region.”

So, the Bureau is suggesting the “jump” is non-climatic and due to the weather station being moved because, while there is “no firm documentation” for a site move, 12 documents have been located that together, they claim, provide some circumstantial evidence for the weather station having been moved between paddocks.

Importantly, the Bureau is not claiming any breakpoints in the Rutherglen data per se, but rather that the trend at Rutherglen is not consistent with its neighbours at about the times for which there is circumstantial evidence the station was moved from one paddock to another.

It is in fact disingenuous and illogical for the Bureau to suggest that what could only be considered an insignificant move, if indeed it did occur, that is a move between paddocks in a relatively flat rural terrain could create a change in the direction and magnitude of the temperature trend.

But there is more. While the BOM claim a discontinuity based on neighbouring stations the algorithms and/or test that might show such a result are not disclosed. We are expected to believe this is the case, but this is not science because no methodology has been provided. In fact, when one of my colleagues, Ken Stewart, tested this proposition. He found that the raw data for Rutherglen has a virtually identical trend to its neighbouring comparison sites, while the homogenised ACORN-SAT data for Rutherglen is strongly biased towards warming relative to those neighbouring sites.

So, I ask again, who is going to be sacked for making up global warming at Rutherglen?