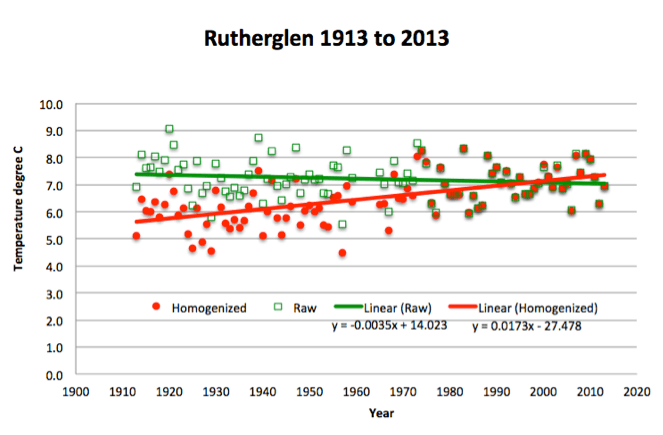 HEADS need to start rolling at the Australian Bureau of Meteorology. The senior management have tried to cover-up serious tampering that has occurred with the temperatures at an experimental farm near Rutherglen in Victoria. Retired scientist Dr Bill Johnston used to run experiments there. He, and many others, can vouch for the fact that the weather station at Rutherglen, providing data to the Bureau of Meteorology since November 1912, has never been moved.

Senior management at the Bureau are claiming the weather station could have been moved in 1966 and/or 1974 and that this could be a justification for artificially dropping the temperatures by 1.8 degree Celsius back in 1913.

Surely its time for heads to roll!

Some background: Near Rutherglen, a small town in a wine-growing region of NE Victoria, temperatures have been measured at a research station since November 1912. There are no documented site moves. An automatic weather station was installed on 29th January 1998.

Temperatures measured at the weather station form part of the ACORN-SAT network, so the information from this station is checked for discontinuities before inclusion into the official record that is used to calculate temperature trends for Victoria, Australia, and also the United Nation’s Intergovernmental Panel on Climate Change (IPCC).

The unhomogenized/raw mean annual minimum temperature trend for Rutherglen for the 100-year period from January 1913 through to December 2013 shows a slight cooling trend of 0.35 degree C per 100 years. After homogenization there is a warming trend of 1.73 degree C per 100 years. This warming trend is essentially achieved by progressively dropping down the temperatures from 1973 back through to 1913. For the year of 1913 the difference between the raw temperature and the ACORN-SAT temperature is a massive 1.8 degree C.

There is absolutely no justification for doing this.

This cooling of past temperatures is a new trick* that the mainstream climate science community has endorsed over recent years to ensure next year is always hotter than last year – at least for Australia.

There is an extensive literature that provides reasons why homogenization is sometimes necessary, for example, to create continuous records when weather stations move locations within the same general area i.e. from a post office to an airport. But the way the method has been implemented at Rutherglen is not consistent with the original principle which is that changes should only be made to correct for non-climatic factors.

In the case of Rutherglen the Bureau has just let the algorithms keep jumping down the temperatures from 1973. To repeat the biggest change between the raw and the new values is in 1913 when the temperature has been jumped down a massive 1.8 degree C.

In doing this homogenization a warming trend is created when none previously existed.

The Bureau has tried to justify all of this to Graham Lloyd at The Australian newspaper by stating that there must have been a site move, its flagging the years 1966 and 1974. But the biggest adjustment was made in 1913! In fact as Bill Johnston explains in today’s newspaper, the site never has moved.

Surely someone should be sacked for this blatant corruption of what was a perfectly good temperature record.

The story is behind a paywall. But if you don’t already have a subscription perhaps its time… this could just be the biggest story of the year.

** There are a lot of tricks that climate science managers have implemented over the years to fix the temperature record; that is fix it so it shows global warming. “Trick” was the word Phil Jones, a leading United Nation’s Intergovernmental Panel on Climate Change (IPCC) scientist, used to explain to his peers that, when constructing very long global temperature series using proxy data based on tree ring measurements that can extend back thousands of years, it was best to substitute thermometer data for this proxy data from about 1960 because the proxy data started to show cooling from about then. Indeed from about 1960 until 2002 the thermometer data mostly did show warming. But now even this instrumental record is starting to show cooling. Enter the relatively new trick of homogenization.