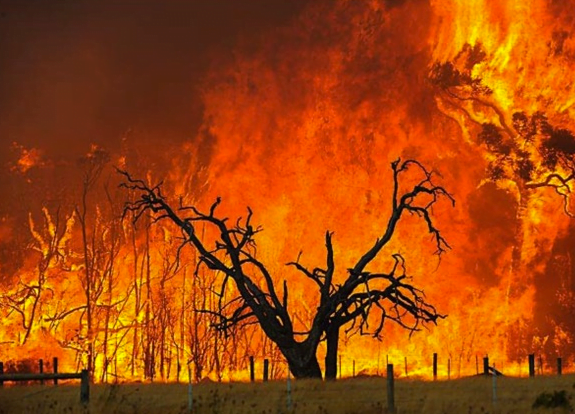 FIRE in the landscape, or bushfire, is Australia’s most lethal and costly natural hazard. Big, uncontrollable bushfires can kill millions of trees and wild animals, thousands of farm animals, and sometimes humans too. Apart from deaths, bushfires incinerate property, such as bridges, farm fencing, homes, and even, a few years ago, an astronomical observatory. The cost to the economy is significant. So bushfire management is, for Australians, no trivial matter. Yet, despite many enquiries since the 1930s, we still have serious bushfires, which seem to be increasing in extent and intensity.

Philosophers may be interested in bushfire epistemology, logic, ethics, aesthetics, and ontology. Bushfire epistemology is very diverse, including traditional Aboriginal knowledge; historical records from early European settler diaries, letters, and journals; recent scientific research; economics, politics; law, and even psychology. Logic is needed to pull these together and arrive at rational policy on bushfire.

Although logic may seem to point to a particular solution, we must beware of the paths of false logic. Also, there may be ethical objections to some seemingly logical solutions. For example bulldozing all native vegetation might abolish bushfire, but would not be a good idea from many other points of view. Even aesthetics come into the picture. Many urban Australians, of recent migrant descent, see blackened ground as ugly, but Aborigines see it as beautiful, and describe it as ‘cleaned up’. Although bushfire is no doubt ugly to victims, flames do have a certain beauty, especially when mild and not threatening. Many of us like a campfire. Ontology is always useful, to distinguish between what is real, and what is imaginary.

While local volunteers provide most of the weary fire fighters, they are under the ultimate direction of salaried fire officers, who are public servants, wear white shirts, big hats, many medals, and appear on television, looking worried. Budget and big hats may be central to their thinking. Policy and budget are largely dictated by leading politicians, who may have budgets and metaphorical big hats of their own, and usually appear by helicopter in the aftermath, dispensing sympathy.

It may seem, to some, that Australia has addressed the bushfire bureau-political chain well (especially the hats, medals, helicopters and sympathy), yet there is ongoing dispute over the best way to actually prevent destructive bushfires. Some, including most farmers and volunteer bushfire fighters, with practical bushfire experience, are in favour of simplification, by returning to something like traditional Aboriginal management, where the bush was deliberately lit at short intervals, in a mosaic pattern, so keeping fuels low, and fires mild, even in summer. Local knowledge is essential for this approach. Those in white shirts should play a supporting, not directing role. In other words, let’s make fire our friend, and use fire to fight fire.

There are many historical accounts of this approach, for example the early German explorer Ludwig Leichardt described frequent mild bushfires in New South Wales in the 1840s, lit by Aborigines. He pointed out that such fires, although widespread and common, were not a threat to humans. I suspect there were few big hats and medals in those days. Early European farmers imitated Aboriginal burning, to keep themselves safe. More recent bushfires in New South Wales, often in long unburnt areas such as National Parks, have been unmistakeably menacing, due to heavier fuel. In 2013 bushfires in NSW caused two deaths, and the loss of 248 houses. The cost was put at $94 million.

Some natural scientists say that bushfire history is anecdote; or mythology; that little is known about Aboriginal burning; or even that such burning is impossible; and that frequent, mild fires destroy ‘biodiversity’ (however that slippery word may be defined). They say that history is unreliable, and only natural science can lead to the truth about bushfire. I suspect that the philosopher Robin G. Collingwood might have strongly disagreed with that view, since he saw history as an essential part of human understanding. Scientists should be aware that there is a history of science.

However, one Australian professor of biology, apparently dismissing history, wrote a letter to the prestigious journal Nature, titled “Don’t Fight Fire with Fire”. This may have reinforced his appointment as a bushfire adviser to the New South Wales government, from 1996-2004. In that time there were many uncontrollable bushfires. We should not, of course, allow ourselves to be misled by the old logical error of post hoc, ergo propter hoc, but we can still ponder. That professor now holds an academic appointment in the United Arab Emirates, where I would imagine there are few bushfires. Again, we should avoid assuming that his presence there has brought about that situation.

But is biology the most reliable source of information on bushfire? Biologists usually use statistical induction, which is a useful tool, but can be misused. Logical blunders have been noticed in refereed natural science journals. Could the broader scope of philosophy help us to get closer to the truth? History, and practical experience, can be astringent cross checks on findings by the scientific method, or a version thereof.

The cynic Ambrose Bierce is not widely acclaimed as a philosopher, yet he did have some useful insights. Before the First World War, in his ‘Devil’s Dictionary’, the cunning old codger defined logic as “The art of thinking and reasoning in strict accordance with the limitations and incapacities of the human misunderstanding”. This may dismay learned, studious people like me, who are entranced by our own beamish logic, but we should remember that Ambrose also defined learning as “The kind of ignorance distinguishing the studious”.

The perspicacious Ambrose did not stop there. He gave a clear example of a suspect syllogism, in which the statement that sixty men can do a piece of work sixty times as quickly as one man (major premise), followed by the statement that one man can dig a post-hole in sixty seconds (minor premise), leads to the unavoidable mathematical conclusion that sixty men can dig a post-hole in one second. Those who have, at one time or another, actually had a shovel in their hands, may find this questionable.

Similarly, those who have, at one time or another, actually had a fire hose in their hands, breathed smoke up their nostrils, felt the enormous radiant heat of fire in long unburnt fuel, heard the roar, and felt the ground shake as a bushfire goes its merry way, may be perturbed at statements by some studious ecologists, apparently supported by statistical evidence, that deliberate, mild burning in cooler weather, to mitigate uncontrollable holocaust bushfires in hot, windy weather, is ineffectual, and harmful to the bush.

Apart from ecology, lawyers have their own philosophy, called jurisprudence. Like Ambrose Bierce, some medieval Scottish lawyers may not be recognised as philosophers, but showed perspicacity in taking the Latin verb reptare (to crawl or creep) and forming the legal terms subreption and obreption. These mean, respectively, to crawl under the truth, and to crawl over it; in other words to mislead by telling less than the whole truth, or by telling more than the whole truth. In bushfire debate, as in courtrooms, we need the truth, the whole truth, and nothing but the truth.

The post-hole syllogism is a clear example of subreption, as are some claims made in the bushfire debate. Some news media reports, or papers in refereed journals of ecology, may mislead public, and hence political opinion. As an example, it may be said that vegetation has been destroyed, without a close definition of that word. Although they may appear to be dead, many Australian plants are well adapted to bushfire, have lignotubers, and resprout readily soon after it. They are no more destroyed, by mild fire, than a garden shrub which is pruned. Other Australian plants need fire, or smoke, in order to flower, or germinate from seed. Words can be deceptive, as philosophers such as Locke, Hobbes and Wittgenstein noted.

With regard to the political aspects of bushfire, Ambrose Bierce had it well covered. He defined politics as a strife of interests masquerading as a contest of principles. The strife of interests includes winning the votes of urban dwellers who are rarely subject to bushfire, yet may have assorted passionate notions about its ecology, perhaps gleaned from refereed journals. The contest of principles, in this case, is the ethical duty of care to both nature and human society.

As a former loyal public servant, I won’t give Ambrose’s cynical definition of the word politician, but it involves the word eel. We should remember, of course, that dictionaries can be wrong. Let’s hope that philosophy can come to the rescue, and that there are at least some worthy Australian politicians, and public servants, who understand that bushfire is Australia’s most lethal, costly, and urgent natural hazard, and won’t use pseudo-science to wriggle out of their duty of care, or ignore bushfire in the hope that it will go away, or become somebody else’s responsibility. Should a basic grasp of philosophy be a requirement for political office? Plato thought so.

Might governments have a Department of Philosophy, to peer deeply into the claims of tendentious lobbyists, no matter what their academic qualifications in natural science, or the length of their publication lists? There is an opinion that those who publish the most, often have the least to say. It’s a pity that Ambrose Bierce disappeared in 1914, so isn’t here to join the debate on philosophy and bushfire. I hope some from Australia, or other fire prone lands, such as USA, Canada, Africa, and even Europe, will.

© DR DAVID WARD 2014
David Ward has a PhD in Landscape Ecology, was formerly a Senior Research Scientist with the West Australian Department of Conservation and Land Management, and also a Senior Visiting Research Fellow at Curtin University, Perth, Western Australia. He has been involved in research into bushfire behaviour, bushfire ecology, and bushfire history for over forty five years. He has also occasionally held a fire hose in his hands, and is writing a book called ‘Our Dangerous Friend: Bushfire Philosophy in South-West Australia’. His email is mumpnpop at iinet.net.au