EASTER is about religion, which is about culture, which is about myth. I was raised on the myths of the Australian Outback, on the poems of Banjo Paterson where the heroes could be “hard and tough and wiry – just the sought that won’t say die”. The landscape was also tough, harsh, and certainly ready to break the individual who was not resilient and innovative. 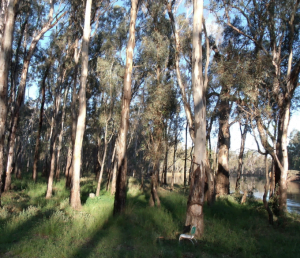 Modern Australia still likes a hero, but our relationship with the landscape has changed. The idea now is that we have broken the landscape, that collectively we have changed the environment and not for the better.

It’s generally acknowledged that all religions attempt two things: to explain existence and to regulate behavior. More than ever, Australians congregate in cities, carry on about greed destroying the environment, and campaign for more wildlife, wilderness and against climate change. Rural Australia receives much of this new culture through the Australian Broadcasting Corporation – through television and radio.

It’s interesting to reflect that in aboriginal culture, wilderness was not a cause for fond nostalgia, but rather a landscape without a custodian. Indeed for the first Australians the health of a landscape was measured less by how much water was in a river, and more by how many kangaroos it could support.

The new culture, however, is generally against the active management of “nature” – mankind’s role, and especially that of industry, is always portrayed in the negative. There is now a regime of legislation and regulation in place, supposedly promoting sustainability, but in reality it hampers good land management and would make no sense to either Clancy of the Overflow or the Dreamtime hunter, Ngurunderi.

Perhaps its time those with a real connection to the Australian landscape, with a real love of country, got together to talk about a new vision for the Outback. If you don’t have your own plan, chances are you will be implementing someone else’s.

Indeed it is possible that in embracing some of the Dreamtime myths rather than those of the environmentalists who feature so prominently as heroes on the ABC, we could all come to a more balanced understanding of the Australian landscape and its needs. Consider, for example, that in one Dreamtime story when Ngurunderi visited the River Murray’s mouth it was not brimming with freshwater as environmentalists insist was the case before irrigation, but had actually closed over. So Ngurunderi was able to walked across the Murray’s mouth from Tapawal into Ramindjeri country. That’s right, back in the Dreamtime, before irrigated agriculture, the Murray’s mouth had closed over.

****
The above article was first published as a column by Jennifer Marohasy in The Land newspaper. The Land is available in good news agencies across Australia.

The dreamtime story of Ngurunderi walking across the Murray’ mouth as told by Albert Karloan, one of the last three youths to undergo full initiation rites in the Lower Murray region is explained at the ‘Myth and the Murray’ website, http://www.mythandthemurray.org/when-ngurunderi-walked-across-the-murrays-mouth/ .