OVER the last year, John Abbot and I have worked on a new method for forecasting rainfall based on the use of artificial intelligence.

We have benchmarked our forecasts against output from the Australian Bureau of Meteorology’s General Circulation Model (POAMA 1.5).  Our model gives a more accurate forecast for 16 of the 17 sites in Queensland that have the highest quality rainfall data. Our methodology is detailed in a new paper that will soon be published in the international journal Advances in Atmospheric Sciences.[1]

Artificial neural networks can find existing complex relationships and patterns repeated in rainfall data.  The neural network software that we run on our standard laptop computer, can perform millions of calculations very quickly, and in this way find natural patterns that repeat themselves. 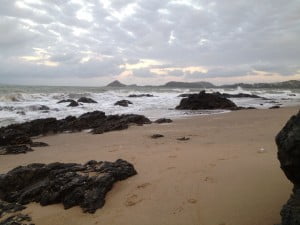 In contrast, the Bureau uses general circulation models; the same models used to predict global warming. These models attempt to forecast seasonal and monthly rainfall by working from a particular theory of climate. Our system is radically different in that we let the model find the patterns.  We let the model find the natural cycles and then forecast forward up to 9 months.

That our system works, proves that there are patterns – natural recurrent cycles – in historical rainfall data.

Contrary to some of the claims of some climate sceptics: the natural hydrological cycle is not totally chaotic.

Contrary to the claims of most warmists: these natural rainfall cycles have not been perturbed by the current elevated levels of carbon dioxide.

What we did is tune one of the most advanced off-the-shelf software packages for pattern recognition (Synapse, Peltarion) into the natural patterns and recurrent cycles in historic rainfall data.

We found a combination of historic rainfall and temperature data combined with historic data for three climate indices (Southern Oscillation Index, Pacific Decadal Oscillation and Nino 3.4) gave the most accurate forecasts. Inclusion of solar irradiance and sunspot number did not enhance the performance of our model.  Inputting carbon dioxide concentrations doesn’t improve our model.

We believe we have barely scratched the surface in terms of potential for rainfall forecasting using this method for eastern Australia and are looking for significant additional funding to progress this work.

The work has so far been wholly funded by the B. Macfie Family Foundation and supported by the Centre for Plant and Water Science at Central Queensland University.

FOLLOWING IS SOME RECENT MEDIA:

Researchers at Rockhampton-based CQUniversity have come up with what appears to be a better model for predicting rainfall in Queensland.

The Australian Bureau of Meteorology makes its forecasts from a mathematical model of the atmosphere (known as POAMA) that run on supercomputers.

But a pair of researchers at CQUniversity have applied neural network technology to the task and claim this gives better rainfall forecasts – and runs on an ordinary notebook computer.

ARTIFICIAL intelligence software has outperformed the Bureau of Meteorology in predicting long-term rainfall – and could soon be used for daily forecasts.

The neural networking technology proved more accurate in forecasting weather events in 16 out of 17 Queensland locations, including rainfall that led to the Wivenhoe Dam bursting, researchers from Central Queensland University found…

Dr Abbot combined his interest in artificial intelligence for pattern recognition with Dr Marohasy’s knowledge of climate science to come up with a neural network system that predicts monthly rainfall from three to nine months in advance.
Their system is the focus of a study about to be published in the international journal Advances in Atmospheric Sciences.
They decided to put their heads together just after the January 2011 flood that isolated Rockhampton from the rest of Central Queensland.

CQUniversity researchers – including one who honed his skills through share market trading – have been able to forecast seasonal rainfall more accurately than the Met Bureau by using artificial intelligence for pattern analysis.

A journal, Advances in Atmospheric Sciences, is about to publish a new paper by CQUniversity researchers Dr John Abbot and Dr Jennifer Marohasy. The paper shows the application of artificial intelligence to monthly and seasonal rainfall forecasting in Queensland, Australia, and compares their forecasts with forecasts by the Australian Bureau of Meteorology’s super computers.

In March 2009 the Australian government ordered two new supercomputers ostensibly to ensure Australia
is at the forefront of international weather forecasting and climate modelling.

In other parts of the world (notably China, India, Iran), governments have also funded research into artificial neural networks for rainfall forecasting. This radically different method is based on pattern analysis accepting that there are patterns, for example short and longer-term cycles, evident in rainfall data. Neural networks, based on artificial intelligence, have the ability to consider large numbers of climate indices (eg. El Nino, Indian Ocean Dipole) and other inputs (eg. temperature, cosmic ray flux) simultaneously and make predictions independently of any understanding of, for example, the hydrological cycle.

Following the devastating floods of January 2011, with three-quarters of Queensland declared a disaster zone, CQ-based researchers Dr Abbot and Dr Marohasy combined their respective interests in artificial intelligence for pattern recognition with climate science to see if they could forecast the weather at least as well as the Australian Bureau of Meteorology.

In their first attempt at optimising their dynamic stand-alone time-delay recurrent neural network (TDRNN) they found that patterns within rainfall data alone could provide a forecast.

The Australian Bureau of Meteorology provided output data from POAMA enabling a direct comparison of the ability of the two models to forecast seasonal rainfall: the general circulation model (POAMA) developed from a theory of climate and run on a super computer with a large staff versus the neural network prototype based on pattern recognition theory and run off a laptop in a small office.

Outputs, as monthly rainfall forecasts three months in advance for the period 1993 to 2009, were compared with observed rainfall data using time-series plots, RMSE and Pearson correlation coefficients. The comparison showed the prototype neural network achieved a lower RMSE for 16 of the 17 sites compared, meaning it gave a better forecast for 16 of the 17 sites.

Dr Abbot, who honed his skills with neural networks through share market trading, considers the prototype design for rainfall forecasting very preliminary, with potential for significant improvement and application for anywhere in eastern Australia with at least 100 years of high quality historical rainfall data.

The findings have significant application to everyone affected by the weather but particularly for agriculture and mining with scheduling of mine activities in CQ significantly impacted by wet days. ENDS

Details and PICs via http://uninews.cqu.edu.au/UniNews/viewStory.do?story=9483