DARRYL Read is a fourth year psychology honors student at the University of New England in Australia. His research project involves surveying citizens near proposed or established wind developments, worldwide. His interest in this area of research began after speaking with rural residents living in Crookwell, New South Wales (NSW), which has the oldest wind project in Australia. 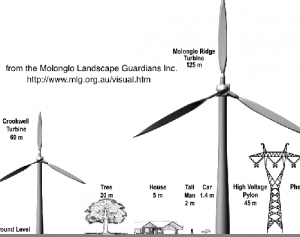 According to Mr Read the conversations enabled him to gain an understanding of the range of issues surrounding wind developments. Following those talks he says he began to read wind articles in the media and most of these stories failed to identify the issues and genuine concerns of the residents:

“IN the beginning my study was designed to gain an understanding of the structure and strength of both positive and negative attitudes toward wind energy developments. The initial plan was for the survey to be distributed throughout the renewable energy precincts in NSW. Following the launch of the questionnaire earlier this month, the study has caught the attention of various pro-wind organizations and individuals who have attempted to discredit the study.

Supporters of the wind industry have also been pushing to prevent the study continuing. To make a long story short, when I presented the questionnaire, the renewable energy coordinators and representatives from the Clean Energy Council (CEC) informed me that they would not support the project because they felt that the study was focusing on the negative aspects of wind energy. (This was probably subconsciously due to my meeting real citizens and listening to their concerns.)

When I began the project I had no idea that the issues were so politically motivated. In my view it appears that wind proponents (government, business, and academia) are not prepared to accept any criticism of wind energy. The issues these people had with the questionnaire relate to the questions regarding the possible impacts of wind developments, like property values, noise, environmental impacts, psychological impacts, etc. Despite significant resistance I have decided to continue with the study, and very much appreciate your passing it on to your network of good people.

Anyway, due to these developments, my research is now a completely independent project, not funded by the government agencies who support wind energy. This has the advantage that I now have more freedom, as the research is not restricted to achieve a particular outcome. In brief, the aim of my study is now to investigate the range of issues surrounding wind developments, and to provide an unvarnished account of citizens’ attitudes toward wind developments. A number of people I had contacted had expressed their personal stories of how these industrial projects have negatively impacted their lives. I believe I have a duty to tell the citizen’s side of the story and expose the practices of governments, which appear to be driven by political vs scientific agendas.

The first aim of the current study is to investigate the attitudes, perceived levels of stress and potential impact on mental health experienced by residents who live in close proximity to wind developments. As a consequence of the differing stages of wind turbine development, it is anticipated that mental health outcomes may be more negatively impacted with progressively more development.

The second aim of the study is to identify the factors which contribute toward oppositional behavior. The various negative impacts of wind projects such as perceived influence on property values, effects on surrounding environment, wildlife, effects of noise etc., will be analyzed. Further testing of variables such as place attachment, time perspective, environmental concerns will be conducted to investigate their influence on oppositional behavior.

In some media there have been suggestions that those who oppose developments are motivated by factors other than the shortcomings of wind energy. For example, It has been reported that those who oppose wind energy are not concerned by environmental problems, the lifestyles of future generations, or so-called global warming. I believe that such findings are used to discredit the genuine concerns residents have toward developments. It is anticipated that the mediation analyses (see below) will dismiss the myths, and put the focus back on the some of the legitimate reasons residents oppose developments, like noise, psychological impacts, etc. Above all, I want to highlight the fact that those who oppose developments are not psychologically unstable or driven by political interests. Their concerns are real and hopefully my study will highlight this.”

Residents who live near existing or proposed wind projects across the world are invited to participate in the study.

When completing the survey please click the arrow at the bottom of each page to move to the next.