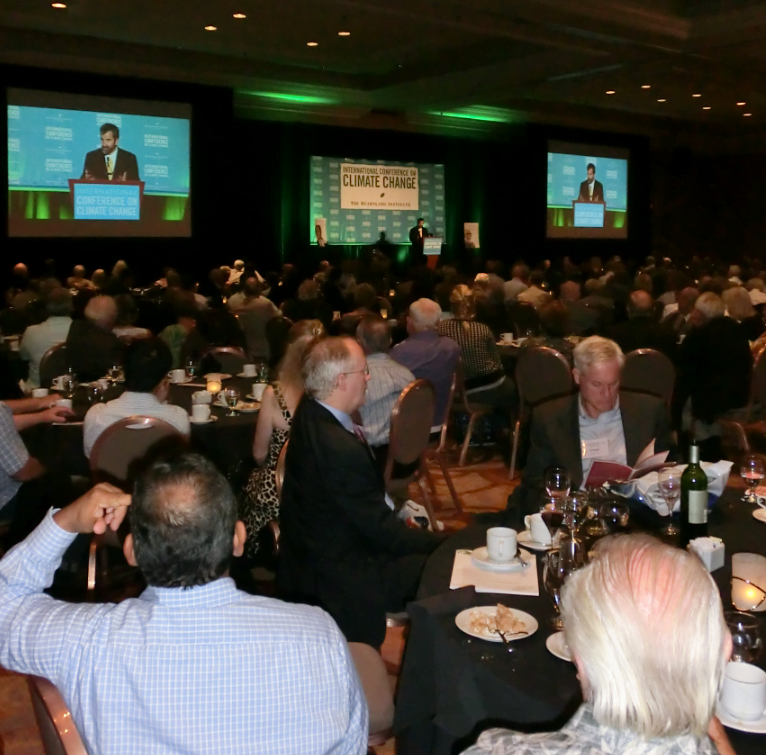 A couple of weeks ago I had the opportunity to attend the Ninth International Conference on Climate Change (ICCC9) in Las Vegas. If you ever doubted scepticism towards man-made global warming as a growing social movement, well, you couldn’t after attending that conference with hundreds of enthusiastic doubters in attendance and some 6,000 watching online.

But I came away wondering about the culture that is developing around the movement, and whether it is truly one of enlightenment.

Most of us share enlightenment values. And skepticism is historically associated with the Enlightenment. But it should be skepticism of entrenched dogmas, not an automatic opposition to every new big idea. Indeed the enlightenment saw big ideas progress; ideas that once realized, dramatically improved the human condition.

Many sceptics apparently think that we have won the scientific argument, and that our next objective should be the dismantling of climate policies and climate research. But they are wrong. We have not won the scientific argument and we won’t, if we continue down the current path of suggesting that we can’t forecast weather or climate. This suggestion, that we can’t forecast, was often made at the conference and made again just last week by Jo Nova quoting Don Aitkin.

The history of science suggests that paradigms are never disproven, they are only ever replaced. Physicist and philosopher, the late Thomas S. Kuhn, also explained that competition within segments of the scientific community is the only historical process that ever actually results in the rejection of one previously accepted theory or in the adoption of another.

In short, if our movement really wants to see the overthrow of the man-made global warming paradigm, it needs to back alternatives and promote new research.

Assuming we are indeed a movement with a desire to contribute in a tangible way to climate science, and a movement looking for viable alternative paradigms, then we need a way of sorting through incommensurable perspectives, and also a way of ensuring that the most promising research is promoted.

Let me make these points in a bit more detail:

1. We have not won the scientific argument.

It was repeatedly suggested at the ICCC9 conference that those sceptical of man-made global warming have some how won the scientific argument. This is nonsense.

On my arrival back in Australia I was forwarded yet another letter from an Australian government official reiterating that: “The Australian Government accepts the science of climate change and takes its primary advice on climate change from the Bureau of Meteorology and CSIRO. This advice aligns with information provided by the IPCC and national and international organisations such as the Australian Academy of Science, World Meteorological Organisation, the Royal Society in the United Kingdom, and the National Academy of Sciences, National Oceanic and Atmospheric Administration, and National Aeronautics and Space Administration (NASA) in the United States.”

The letter goes on to state that, “The world’s leading scientific organisations have found that the Earth’s climate is changing and that humans are primarily responsible…”

Not only do these esteemed organisations accept anthropogenic global warming theory (AGW), they also work actively with the mainstream media to crush, ridicule or quarantine any criticism of AGW.

If those sceptical of man-made global warming can be accused of denial, it is of this fact. We might be having some impact on the political process, even achieving repeal of the carbon tax in Australia, but the science of anthropogenic global warming remains as firmly entrenched as ever especially amongst the media, academics and legislators.

Anthropogenic global warming is a fully functional, well-funded scientific paradigm that is having a major impact on social and economic policy in every western democracy.

As I explained in session 13 at the conference: Scientific disciplines are always underpinned by theories that collectively define the dominant paradigm. In the case of modern climate science that paradigm is AGW. It defines the research questions asked, and dictates the methodology employed by the majority of climate scientists most of the time. AGW may be a paradigm with little practical utility and tremendous political value, but it’s a paradigm none-the-less. The world’s most powerful and influential leaders also endorse AGW.

In a lecture to the Commonwealth Club in San Francisco in September 2003 Michael Crichton said: “The greatest challenge facing mankind is the challenge of distinguishing reality from fantasy, truth from propaganda. Perceiving the truth has always been a challenge to mankind, but in the information age (or as I think of it, the disinformation age) it takes on a special urgency and importance.”

Scientists are meant to know the difference between fact and fiction and as a first check of the reliability of a source of information they will often ask if it has been “peer-reviewed”. Peer-review means that research findings are conducted and presented to a standard that other scientists working within that field consider acceptable. This is normally achieved through publication in a scientific journal and involves the editor of the journal asking for comment on the validity, significance and originality of the work from other scientists before publication. In short, the system of peer-review means scientific research is subject to independent scrutiny but it doesn’t guarantee the truth of the research finding.

In theory rebuttals play an equal or more important role than peer review in guaranteeing the integrity of science. By rebuttals I mean articles, also in peer-reviewed journals, that show by means of contrary evidence and argument, that an earlier claim was false. By pointing out flaws in scientific papers that have passed peer-review, rebuttals, at least theoretically, enable scientific research programs to self-correct. But in reality most rebuttals are totally ignored and so fashionable ideas often persist even when they have been disproven.

Consider, for example, a paper published in 2006 by marine biologist, Boris Worm, and coworkers, in the prestigious peer-reviewed journal Science. The study was based on the meta-analysis of published fisheries data and predicted the collapse of the world’s fisheries by 2048. Publication of the article by Worm et al. was accompanied by a media release entitled “Accelerated loss of ocean species threatens human well-being” with the subtitle “Current trend projects collapse of all currently fished seafoods before 2050”.

Not surprisingly, given the importance of the finding, the article attracted widespread attention in the mainstream media and also within the scientific community. But not everyone agreed with the methodology used in the Worm study. Eleven rebuttals soon appeared, many within the same journal Science, and within months of the original article.

The rebuttals, however, scarcely altered the scientific perception of the original article.

In a comprehensive study of this, and six other high-profile original articles and their rebuttals, Jeannette Banobi, Trevor Branch and Ray Hilborn, found that at least in marine biology and fishery science rebuttals are for the most part ignored.

Indeed it is the naive view that scientific communities learn from obvious mistakes. And as past failures become more entrenched it can only become increasingly difficult to distinguish truth from propaganda, including in the peer-reviewed literature.

3. Paradigms are never disproven: they are only ever replaced.

Since my return from the conference, it has been suggested to me that the ‘new paradigm’ for climate science is the one described in the Nongovernmental International Panel on Climate Change (NIPCC) reports, in particular the ‘null hypothesis paradigm’ that according to many skeptics, is far better at accounting for climate phenomena than are the General Circulation Models. I disagree.

The null hypothesis refers to the general statement or default position that there is no relationship between two measured phenomena. In the case of NIPCC the claim is that “nature not human activity rules the climate”. But this tells us almost nothing. In many ways it’s a cop-out. It’s like a theory of electricity without any explanation of charge, voltage or magnetism.

A good test of the value of any scientific theory to those external to the discipline is its utility. For example the calendars that were developed based on Nicolas Copernicus’ Heliocentric Theory of the Universe were better calendars than those based on Ptolemy’s Handy Tables. The new calendars, based on a new theoretical approach, more precisely predicted the position of the sun and the planets and thus the seasons, which, of course, influence the weather. In the same way, those who want to see AGW theory discarded need to increase their expectations of climate science and in particular demand some practical benefits. The most obvious would be better weather and climate forecasts.

Last year, aversion to a new theory attributing solar variability to gravitational and inertial effects on the sun from the planets and their satellites, not only resulted in the premature termination of a much-needed new journal (Pattern Recognition in Physics), but was also mocked by leading skeptical bloggers. More recently leading skeptical bloggers, Willis Eschenbach and Lubos Motl, were far too quick to attack a new notch-delay solar model that David Evans and Jo Nova developed in an attempt to quantify the difference between total solar irradiance and global temperatures and in the process forecast future climate.

In attempting to understand Dr Motl’s issues with Evans and Nova’s model, I was told that my work with John Abbot forecasting rainfall was also no better than “a sort of magic” because, like Evans and Nova, I was describing relationships “without a proper understanding of which variables are really driving things”. To the layman the few paragraphs of relevant jargon that Motl posted at his blog may have given the impression of some special knowledge, but in reality he was just repeating prejudices including the popular claim that climate is essentially chaotic.

Over the last few years my main focus of research has been on medium-term monthly rainfall forecasts. Not using General Circulation Models (GCMs) that attempt to simulate the climate from first principles, but rather using artificial neural networks (ANNs), which are a form of artificial intelligence and a state-of-the-art statistical modeling technique. John Abbot and I very quickly established that our method – which relies on mining historical climate data for patterns and then projecting forward – could produce a much more skillful medium term rainfall forecast than the Australian Bureau of Meteorology’s best GCM.

Of course the use of statistical models for forecasting is not new, nor is pattern analysis. Many long-range weather forecasters and astrophysicists rely on lunar, solar and planetary cycles to forecast both weather and climate.

So, I was somewhat surprised to hear so many big names at the conference claim from the podium that it would never be possible to forecast weather more than a few days in advance, some going as far to suggest, like Lubos Motl, that climate is essentially a chaotic system.

Such claims are demonstrably false. Indeed that our ANNs (see Atmospheric Research 138, 166-178) can generate skillful monthly rainfall forecast up to three months in advance, is evidence that we are not dealing with a chaotic system.

Until skeptics start thinking about these issues and the need to back something, rather than perhaps always being too keen to knock the next big idea, we won’t truly make progress towards replacing the current dominant paradigm in climate science.