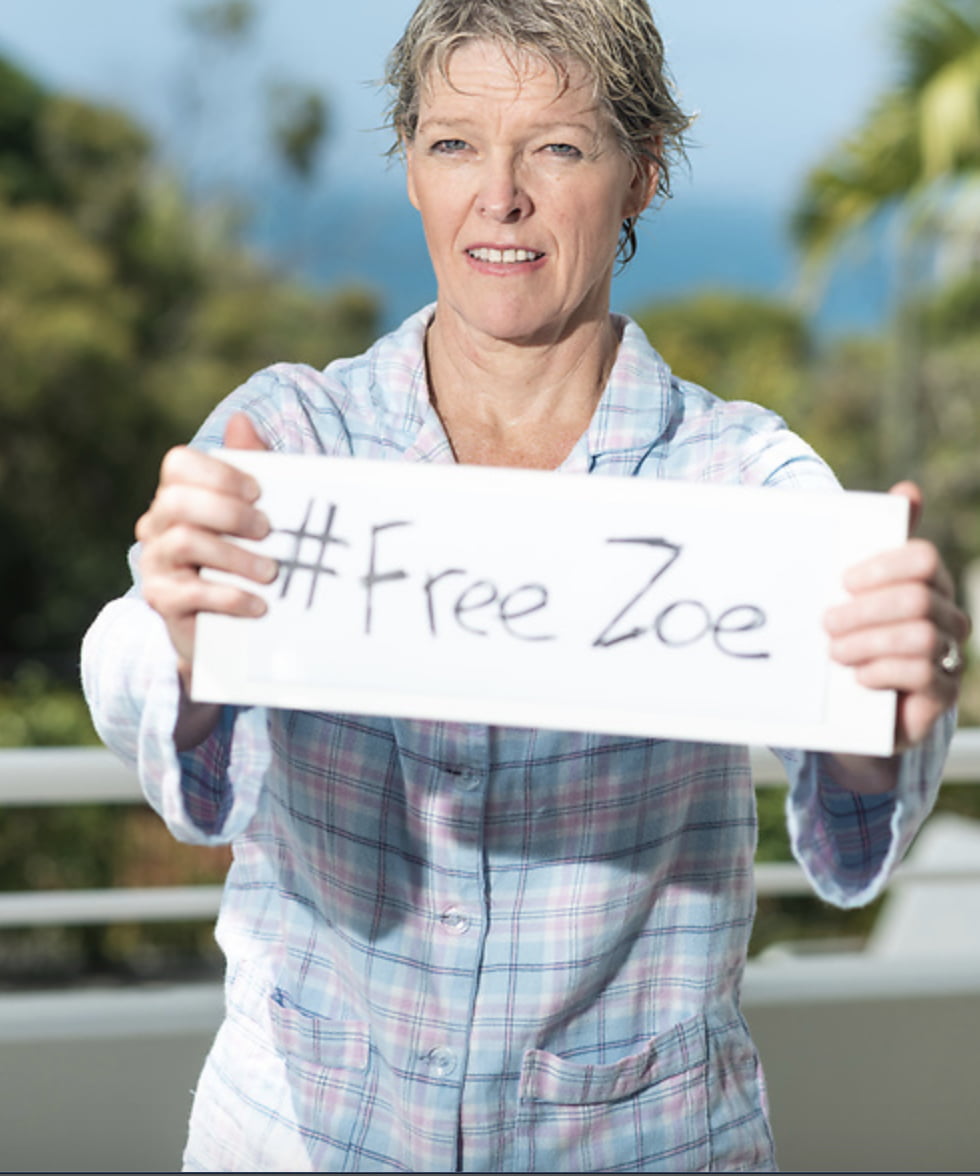 Melbourne was once a vibrant city full of culture and freedoms. Then suddenly it became a dystopian nightmare.

There was an 8pm curfew.

Visiting friends or family during the one hour each day citizens were allowed to leave their home was banned.

Everyone was expected to get vaccinated – not just once, but repeatedly against the flu we have come to know as Covid 19.

Protesting the lockdown and the vaccination mandate was banned.

On Wednesday, 2 September 2020, Zoe Buhler was arrested and handcuffed at her home in the nearby city of Ballarat. She was charged with ‘incitement’ under the Victorian Crimes Act. She was facing a criminal conviction and a penalty of up to A$19,000. Her alleged crime was that on her Facebook page she encouraged friends to gather at the local park to ‘end lockdowns’ and take a ‘stand for human rights’.

Zoe Buhler was not the only woman to be handcuffed by the Victorian police for incitement. Craig Kelly made a video showing how it was back then. He was scrubbed from Facebook, and lost his once safe seat of Hughes at the federal election.

A key difference for Zoe Buhler was that her partner recorded the arrest live on Facebook, and it went viral. Her sister got in contact with Craig Kelly then a member of parliament, who phoned John Roskam and a legal defence was organised including Stuart Wood QC, Ruth Shann, and Stephen Andrianakis. Andrew Cooper started a fundraising appeal with a target of $300,000. Thank you if you donated here.

Justice does not come cheap in Australia, and incarceration is too common.

The Institute of Public Affairs supported Zoe’s legal fight and welcomed the outcome. IPA research has consistently exposed how the rule of law has been undermined as part of the Victorian Government’s excessive and arbitrary public health response and is now calling on the Victorian government to grant an immediate amnesty for all Victorians who were fined and charged under the covid rules for exercising their basic rights and freedoms.

For those assuming Zoe did something wrong, following is my understanding of the detail as copied and pasted from @martynlloydiles at the Australian Christian Lobby, written back in 2020.

Here is a list, in no particular order, of the problems with Zoe Lee’s arrest.

1. She probably did not commit the crime of incitement. It requires first, intent, and second, for the crime incited to have actually happened. (See Crimes Act 1958 (Vic) s 321G). She was probably falsely arrested.

2. Daniel Andrews claimed, when questioned the following day (today), that he had not seen the video. This is either a lie, or he specifically told his staff not to show it to him so that he could say he had not seen it.

3. The Assistant Police Commissioner (APC) distinguished her event from BLM because hers was during stage 4 lockdown, and BLM was during stage 3. Wilfully deceptive. Ballarat – the location of Zoe’s event – is in stage 3 lockdown.

4. The APC distinguished her event from BLM on the basis that BLM encouraged social distancing and mask wearing. So did her event, very specifically… I quote, “All social distancing measures are to be followed so we don’t get arrested please. Please wear a mask unless you have a medical reason not to.” Again, wilfully deceptive.

5. The APC said, ‘While this deadly virus doesn’t discriminate, we won’t discriminate and we can’t discriminate, in holding people to account.’ – err, Black Lives Matter, anyone??? This made me snort my coffee out my nose. VicPol are not enforcing a righteous standard, but a political one. Agree with their politics, they lie to defend you. Disagree, they lie to falsely arrest you.

6. The police simply do not have to handcuff a person, do not have to arrest a person, and do not have to execute a search warrant under these circumstances. Doing do is unusual on all three counts. The doing of all three, in front of her family, whilst pregnant and compliant, is nothing short of intimidation tactics. (Not to mention she committed no crime, see point 1).

7. From her interview the following day: ‘Sorry about my bimbo moment, but I didn’t realise I wasn’t allowed to. I wanted to protest in Melbourne but obviously realised I wasn’t allowed to do that … so I just wanted to feel like I was doing something, you know standing up for human rights, and you know I am just a passionate person and I am sick of the lockdowns, I am sick of hearing about suicides, I personally lost my job, and I am just sick of watching the economy collapse. It got to the point where I just wanted to peacefully protest.’ Okay, so she is not some sort of anti-lockdown fanatic, or serial protester, or any such thing… and she intended no harm. This accords with the phrasing of her event – among other words, she said, ‘Here in Ballarat we can be a voice for those in stage 4 lockdowns.’

8. Despite point 7, above, the APC implied very heavily in his press conference that she probably had a history of negative police interactions which led to her handcuffing. Rather unfair conjecture.

9. Even if she did seem to breach the Crimes Act, the Act is not allowed to be applied in a way that infringes on her freedom to politically communicate. This is a well known constitutional law doctrine in Australia, and state law is limited on this basis.

10. Even if she did seem to breach the Crimes Act, she has a further protection. The Victorian Police are not allowed to carry out their duties in a manner that breaches the Victorian Charter of Human Rights and Responsibilities which includes the rights to ‘peaceful assembly and freedom of association’ and ‘freedom of expression’ …

****
The feature image shows me in pyjamas similar to the flannels Zoe Buhler was wearing when she was arrested in September 2020. The photograph was to help with the fundraising back then.