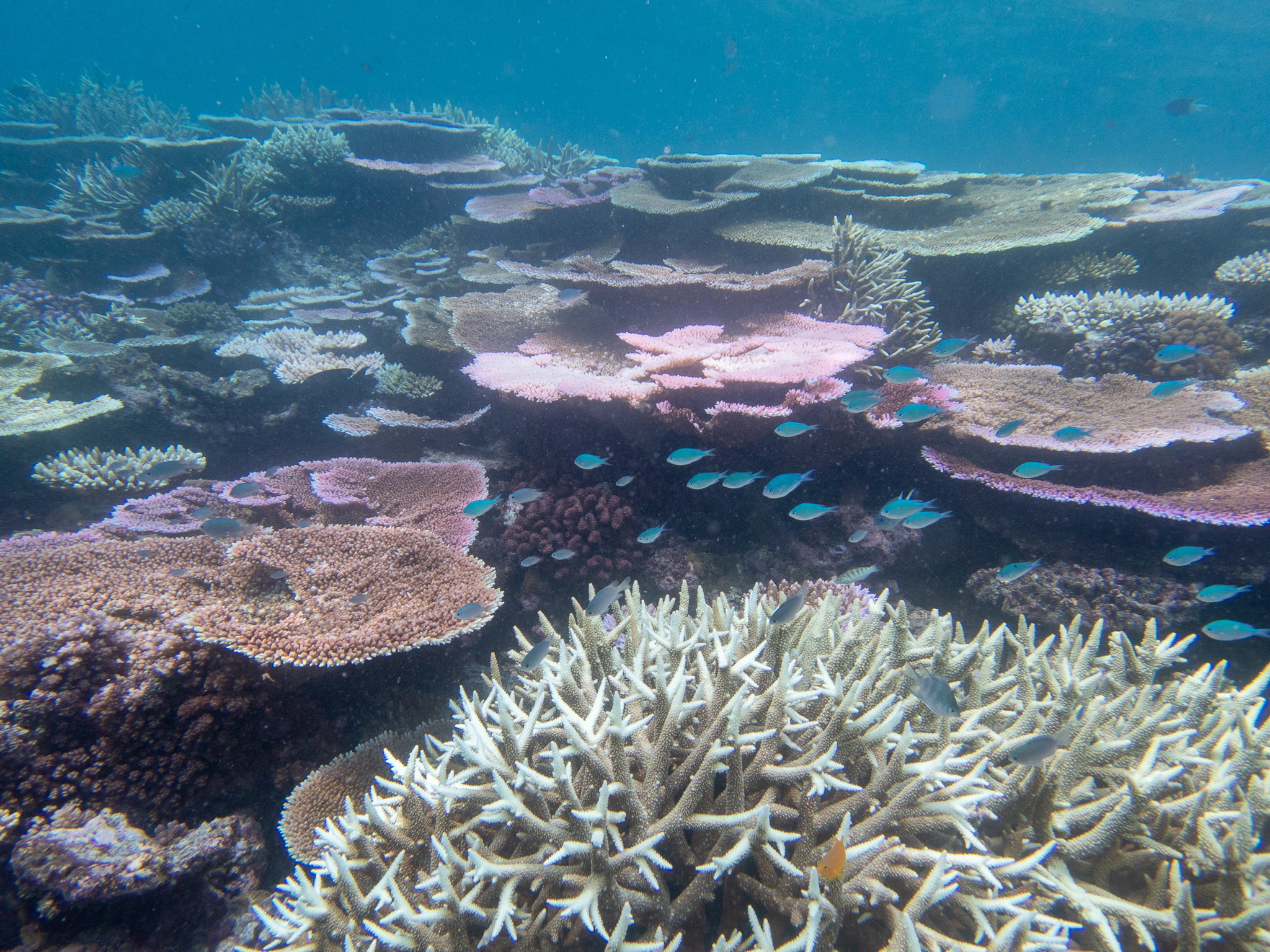 It is all over the news, right across the world: the Great Barrier Reef is bleaching – again.   Children can’t sleep at night: it is not only the war in the Ukraine keeping them awake at night, but also our apparent disregard for nature.

On 10th April 2022 I went to the very epicentre of the claimed latest severe mass coral bleaching, and found a coral wonderland.

There was some bleaching, especially around the perimeter of John Brewer Reef – on the sandy sea floor where the Australian Institute of Marine Science (AIMS) surveyed and concluded coral cover is never more than 30% – but most of John Brewer Reef is still covered in more than 80% colourful corals.    This high percentage is denied by AIMS because they never survey the reef crest.

This coral reef, John Brewer Reef,  has been described as one of the worst bleached by the ABC, The Conversation, and The Guardian.   The Guardian uses the same photographs as the ABC which have been sourced from environmental group the WWF.

At John Brewer Reef just yesterday, I swam over the top – over the reef crest – and I also swam along the walls that drop down to the sandy sea floor.

I will show you some of the snap shots that I took with my Olympus TG6, no lights.  I also swam around the sandy perimeter, and I will show you these photographs in my next blog post – that will be Part 2 of this series.   In Part 3 and 4 I plan to show you video of transects that will be swum later in the week when I return to John Brewer Reef with one of Australia’s best underwater cinematographers.

John Brewer Reef is 70 kms (38 nautical miles) east of Townsville, part of the central region of the Great Barrier Reef.   Rising from the sandy sea floor are two huge flat-topped blocks of consolidated limestone that represent layer upon layer of dead coral (that you can’t see) with a topping (that you can see) of colourful plates and so many tiny fish.  Running between these two reefs is a deep canyon with walls of more coral and more fish.

********   The photograph at the very top of this blog post was taken just yesterday (10th April 2022) while I (Jennifer Marohasy) swam over the top of John Brewer Reef.  The coral in the foreground is not bleached, but rather a beige-coloured and with naturally white tips.  The very pink coral in the centre of the photograph is ‘bleaching colourful’. The pink to purple coloration in some of the corals at the reef crest is not from zooxanthellae, which are symbiotic algae, but rather from increased pigment accumulation from the host tissue/the coral itself as the zooxanthellae are expelled.  This is often referred to as fluorescing and/or bleaching colourful.

The corals at the reef crest at John Brewer Reef that are bleaching colourful/fluorescing are likely to make a full recovery.