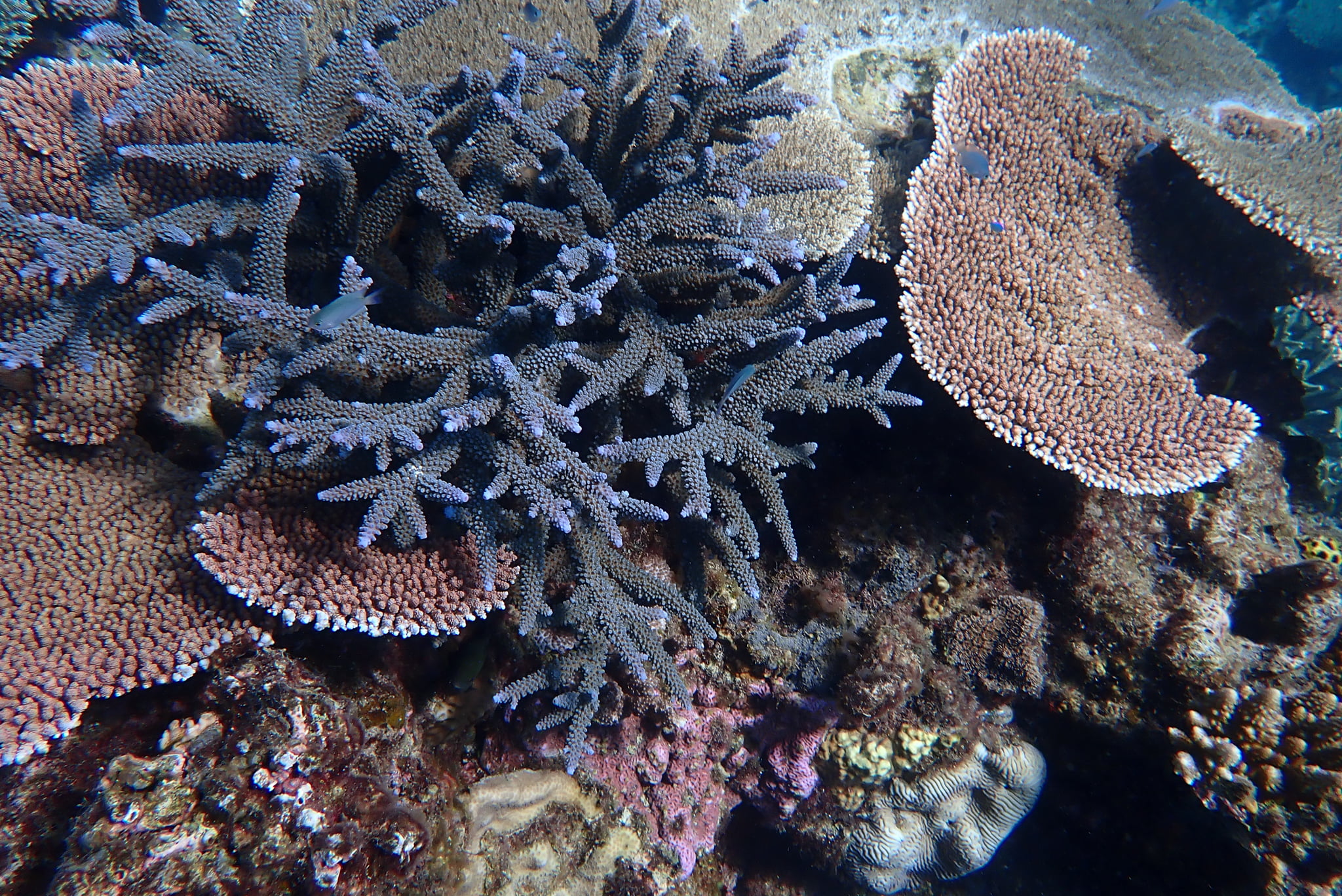 The Australian Broadcasting Corporation (ABC) has uploaded some footage of John Brewer Reef that is part of the Underwater Museum of Art, the footage was apparently taken by the World Wide Fund for Nature (WWF) in February.   It does not show a lot of bleached coral, but it does show some badly bleached individual colonies – and a lot of healthy beige corals.  (Remember, my first short film, about Beige Reef, explaining that most corals the world-over are beige in colour.)

I was not expecting to hear about widespread coral bleaching.  I’ve been watching the Southern Oscillation Index (SOI) fluctuate around +10.  This is a measure of the Barometric pressure (hPa) difference between Tahiti and Darwin.  During a La Niña it is usually cloudier and therefore cooler along the east coast of Australia, though water temperatures are warmer than on the other side of the Pacific.  Seeing the global satellite temperatures coming down with Australia’s February 2022 anomaly at minus 0.5 °C – in other words, half a degree cooler than the 30-year average – I was not expecting to read about coral bleaching.

Yet according to the Great Barrier Reef Marine Park Authority, water temperatures have been up to a full 2 °C hotter and they are claiming the warming and the coral bleaching is now widespread and most severe in the central area with ‘most reefs severely bleached’ off Townsville.   I am now organising to visit John Brewer Reef in mid April (2022), when an underwater photographer will be available to film long transects so we can get an idea of the health of the corals.  Local dive operators have indicated to me that there is some coral bleaching but that it can be difficult to find amongst all the healthy corals, so I am also organising for a local guide.

I have been wanting to film coral bleaching since I visited the Ribbon Reefs back in January 2020.   Do you remember the short film that followed, my second short film, after all the swimming, only to find The Monolith and other well-known corals had completely recovered from what had reportedly been devastating coral bleaching in 2016?   I was too late.  The Monolith was back to being a brilliant beige.

More recently I was at Heron Island looking for coral bleaching.  I was shown where all the corals had bleached stark white back in early 2020, but by November 2021 when I visited, they were fully recovered.  I was too late.  I was told the bleaching lasted all of two months, with no significant coral mortality.

It is my experience that it is difficult to find corals bleaching at the Great Barrier Reef.   The bleached corals either quickly recover – before I get there – or apparently rot and disintegrate so there is no evidence of them.  Remember though, we did find some dead plate corals, covered in algae, at Britomart Reef and I show them in my third film, Finding Porites.    We hypothesised that those plate corals died from bleaching, but I didn’t see any actual bleaching on that week-long trip to Myrmidon reef that also involved a lot of swimming and looking.

If I finally manage to get some footage of widespread coral bleaching and it is during a La Niña event I’m not going to complain.

I have been wanting to visit a badly bleached reef and capture it in that state so I can monitor its recovery for quite a while now.

Remember, I went to Pixie Reef and, with Leo and Stuart, got all that transect footage and all the transect photographs back in February 2021 – the reef was apparently one of the very worst bleached reefs according to a peer-reviewed publication by Terry Hughes.  (Scroll down from the link to the Pixie Reef Data Page 2021 and you can open the 360 photographs from 36 transects laid in February 2021 at this reef and make-up your own mind about the state of this reef.)

Much of Pixie Reef, did look bleached from a drone at 120 metres up, which is about the altitude that Terry Hughes flies when he undertakes his surveys out the window of the airplane.

When you get down to Earth and under-the-water, well Pixie Reef was magnificently healthy.  I am going to visit it again, soon, to check how it is this year.

Be sure to know what I find when I visit the reefs off Townsville and Cairns,  consider subscribing for my monthly e-newsletters.  (The email is usually sent on the last day of each month – if you can’t find it check your junk folder.)

If you were wondering what I was looking at as I floated above the corals at Pixie Reef (face down) while Stuart photographed me from the drone 120 metres up, it is the blue staghorn/Acropora coral in the feature photograph at the very top of this blog post.   This reef, Pixie Reef, is listed as one of the worse bleached of all the Great Barrier Reefs, yet we found it so healthy.