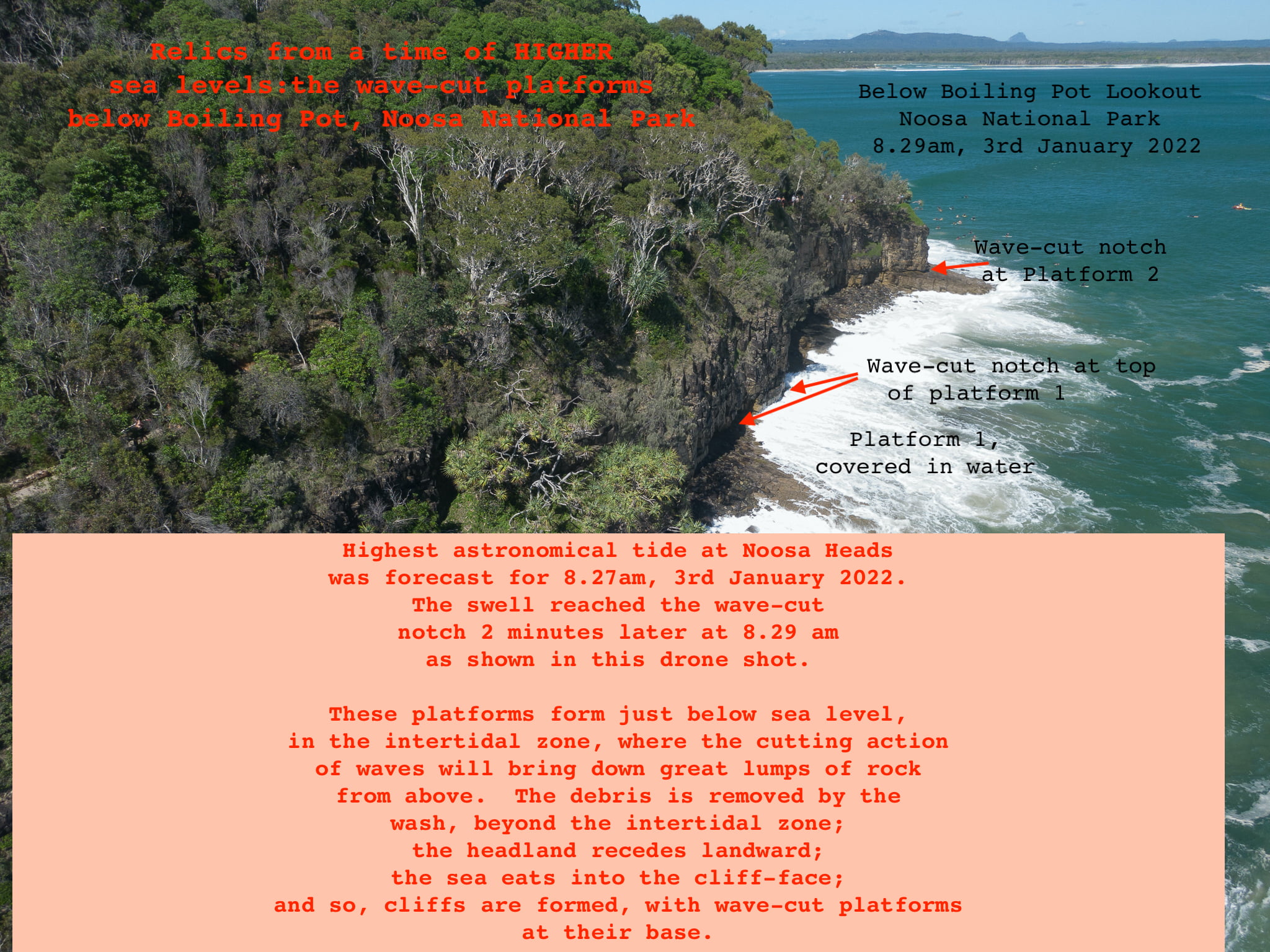 It has been an exciting start to the year where I live, because the highest astronomical tide was forecast for 3rd January and there was a cyclone tracking towards us.

On the highest tide each year, I wonder if the waves will reach to the wave cut notch at the bottom of the cliff face, below Boiling Pot Lookout in Noosa National Park that is about halfway down the east coast of Australia, just near where I live.

I have been going around and standing there on the lower platform (Platform 1) for some years at the time of the highest tide.   These tides are in summer in the Southern Hemisphere because that is when the Sun is closest to the Earth, and they usually correspond with a New Moon or Full Moon.

This year, on the day of the forecast highest astronomical tide (Monday 3rd January 2022), Noosa was mentioned on the front page of the national newspaper – the story was about the huge swells: up to 4 metres high from ex-cyclone Seth lingering just offshore.

Was this the year I was going to be washed from the wavecut platform at the bottom of the cliff face on the highest tide?

These platforms form just below sea level, in the intertidal zone, where the cutting action of waves will bring down great lumps of rock from above.  The debris is removed by the wash, beyond the intertidal zone; the headland recedes landward; the sea eats into the cliff-face; and so, cliffs are formed, with wave-cut platforms at their base.

This platform below Boiling Point Lookout, that I have stood on in past years: it is so wide.

When was it formed? How long were sea levels at that height – how long does it take to erode a cliff face to that width?

This year the waves, on the biggest swells, at the time of the high tide, they hit the cliff face!

Not the sea level, but the swells.

And yet I wasn’t washed away.  Because I wasn’t on the platform!

But my friend Jared was there, and he was not washed away.  You can see him in the drone footage that I have taken – so much footage that now needs editing – that shows the largest swells including as they hit the cliff face the day before (2nd January) with Cyclone Seth just offshore, and the next day (3rd January) which was highest tide day for the year.

I was flying my drone (the wonderful Skido) from a ledge beyond the platform into the winds and out to sea so I could get the feature image looking back at the cliff face at the time of the highest astronomical tide, as shown in the feature image at the top of this blog post.

This year I dared not venture below the cliff face at the time of the highest tide, but Jared did – and he was not washed away.   You will see him in the short film that I hope to make about this cliff face and climate change.  To be sure to know when it is uploaded to the internet or ready for showing in the wonderful local Pomona Theatre subscribe for my monthly e-newsletters. 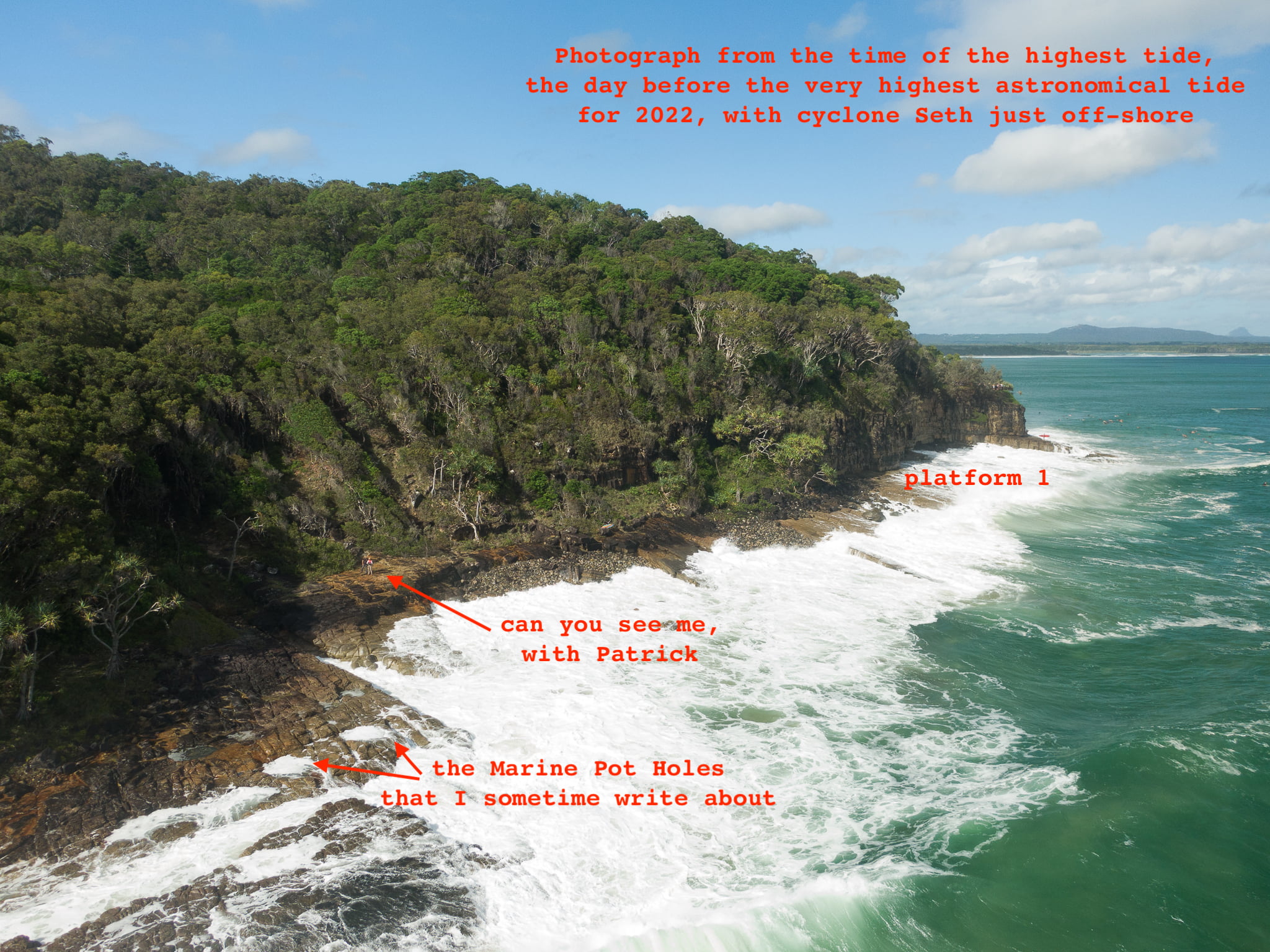 Much thanks to Charles for republishing at WhatsUpWithThat.  I really appreciate the comments in the thread including from Rud Istvan and John Tillman.  They are suggesting the platforms could date to the Eemian high stand that was 120,000 years ago.  Apparently during the Eemian period the Southern Dome of the Greenland Ice Sheet melted about 25% more than now, and temperatures were 6 to 8 degrees warmer.