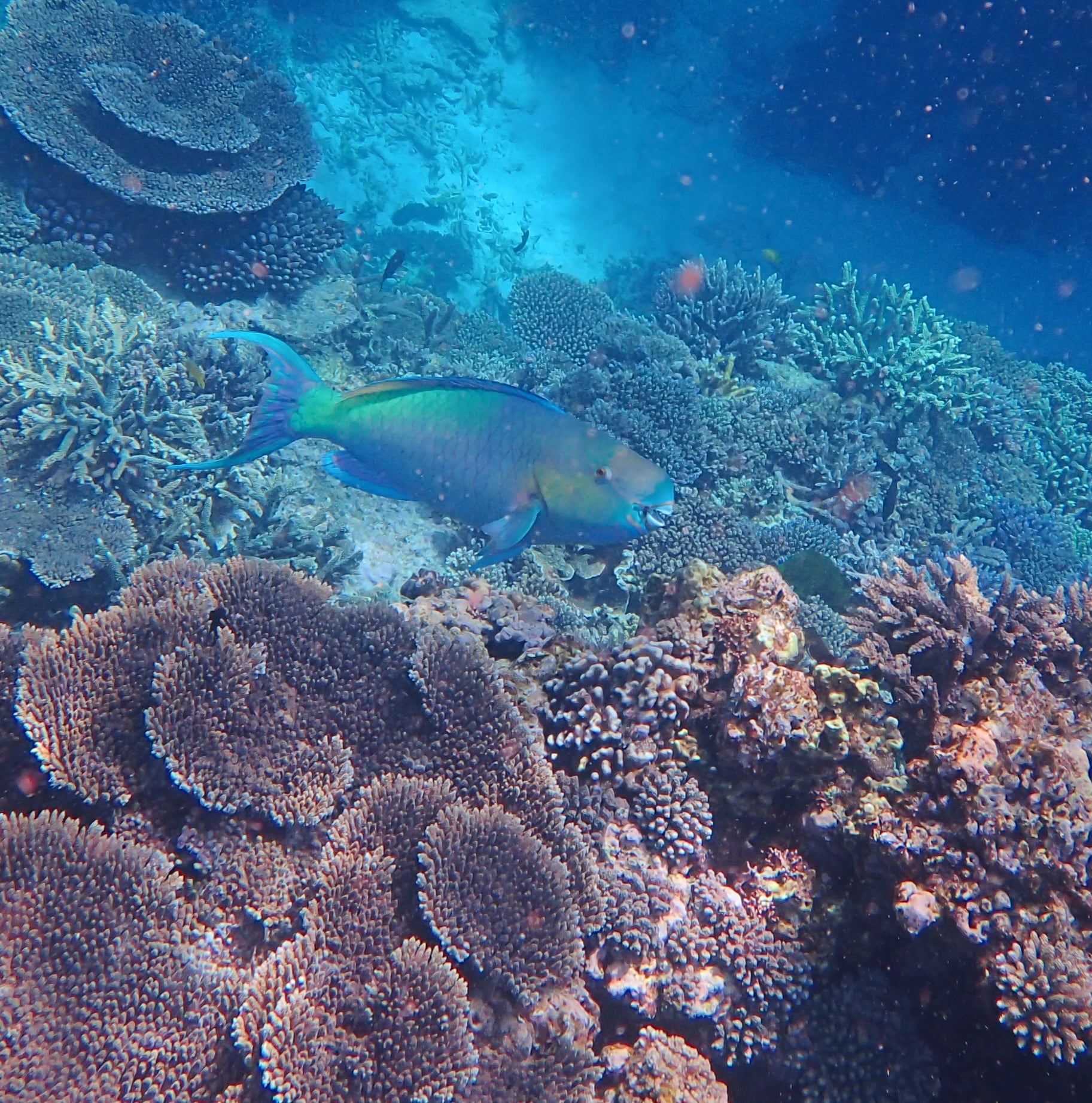 I lent my underwater camera (Olympus TG-6) to a dear friend who recently visited Lady Elliot Island at the Great Barrier Reef. She came over last Sunday to return the camera, and to show me some of her photographs. My favourite is of the Parrot fish just beyond the magenta-coloured corals, shared above. Over the ledge the water is deeper, and the corals have a blue haze. This is because wavelengths in the blue part of the visible light spectrum penetrate water to some few metres, while all the wavelengths in the red part of the spectrum are absorbed by 5 metres under the water.

For those who have never snorkelled or scuba-dived, and who like to lament the dying Great Barrier Reef, the corals beyond the parrot fish in Jessica’s picture might all look bleached. But that is how corals look in the distance when visibility is good, because the water is so clear. It is only when you swim up to them, when you are nearer to the corals, that you can see their real colour.

When I see photographs online and in newspapers of corals described as bleached, I often wonder how the photograph was taken – at what depth and whether it was colour corrected. I wrote to a journalist, Michael Foley from the Sydney Morning Herald, back in April about a picture purportedly showing bleached coral.

I’m really impressed with your interview with Terry Hughes and particularly how much online media has republished your article ‘Reef on path to destruction and clever science can’t fix it’ and that photograph.

I was curious about the image of the bleached corals. Where it was taken, and how it was colour adjusted. I sent an email via the Catlin Seaview Survey contact page, asking for this information last Tuesday (13th April) and to Sara Naylor at UQ. The email to Sara bounced, Catlin hasn’t replied.

What I would really like is the original full resolution raw image. Could you please send me this?

Also, where was the image taken/which reef, and when/which year?

There is a wonderful library on Lady Elliot Island, at the resort in a room tucked behind the museum. I spent some time there most evening when I was on the island for a week back in May. I found a photograph very similar to the one I queried Michael Foley about. It is in a book entitled ‘Coral Whisperers’ by Irus Braverman published by the University of California Press in October 2018.

It would seem somewhat disingenuous for a news story published on 8th April 2021 to be accompanied by a photograph from 2016 but without including this important information: that the photograph is five years old. It would also be useful if the publisher explained that visible light of a blue wavelength penetrates water, while red is absorbed, so corals even just a few metres away can have a blue haze and even appear bleached.

Also, if the Sydney Morning Herald are going to include a photograph from five years ago in a news story, why don’t they also show a more recent photograph – so we have some idea whether the coral is still there, or not?

Of course, beige is the most common colour of corals at reefs around the world, as I explained in my short documentary film ‘Beige Reef’, that you can watch on YouTube.

Much thanks to Steve Messer for finding a higher resolution image of the ‘bleached corals’ here: https://www.flickr.com/photos/stopadani/33675818851
(more detail with his comment in the following thread). Reproducing just a section of this photograph from Flickr (below) it is apparent that the branches are a dark tan in colour with white axial corallites and/or white tentacles extended from the corallites. This coral is not bleached at all.

Considering my SST course notes on low visibility and night diving it is apparent that with depth orange/beige begins to look very dark and then eventually black. So, if we could lift this coral to the surface the stems would perhaps be orange/beige and covered in white corallites with white tentacles extended.

I’m including a picture of an Acropora cervicornis from page 206 (volume 1) of Charlie Vernon’s ‘Corals of the World’, see below. This species of coral is from the Caribbean, not the Great Barrier Reef, but the photograph illustrates my point.

So, which species of Acropora, or perhaps Anacropora, have the experts mistaken for bleached?

The feature image, at the very top of this blog post, was taken at Lady Elliot Island in September 2021 by Jessica with my TG-6 camera. I also like how Jessica’s photograph so clearly shows that the Parrot fish’s teeth are fused together. These fishes eat live coral. I’ve seen them scrap the massive Porites and bite into pretty Acropora.