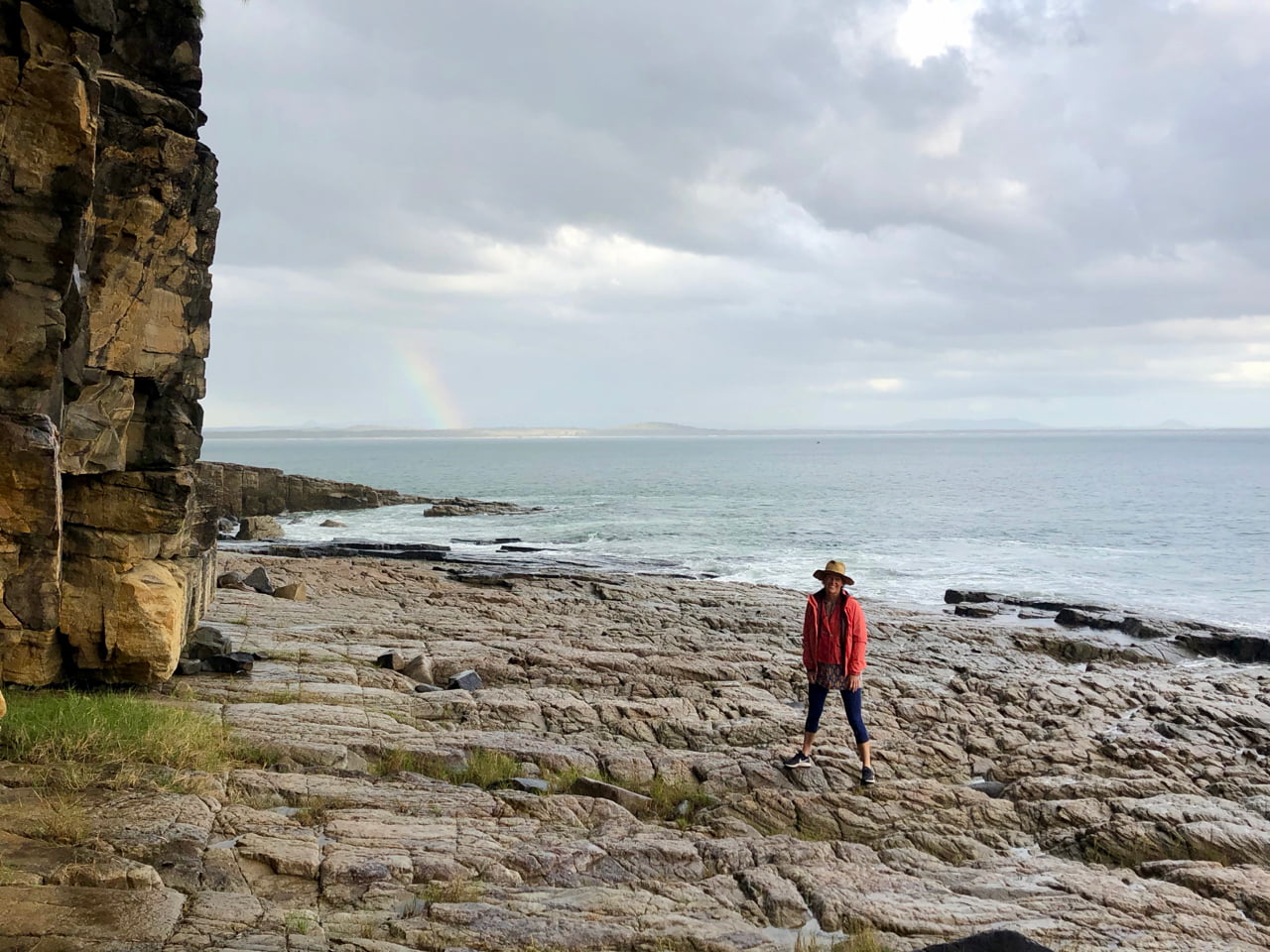 I was there again on the wave cut platform to see how high the waves broke on the very highest tide for this month, and also to exercise. (During this Corona virus pandemic we are allowed outside to exercise.)

The photograph was taken by Caroline Forsyth yesterday at 7.23 am on 7th April 2020.

I’m standing on the wave cut platform at the time of the highest tide, yet the waves don’t reach anywhere near the cliff face.

Once upon a time when sea levels were higher, I would have been waist-deep in surf. I am referring to a period just a few thousand years ago, known as the Holocene High Stand.

The waves would have pounded that cliff face, occasionally bringing down great lumps of rock from above.

As the cliff-face retreated landward, the platform became wider. That is why this type of formation is called a Wave Cut Platform.

There are similar geological formations all around the world.

The peer-reviewed geological literature explains that they are evidence sea levels have been falling, not rising, over the last few thousand years. (Some relevant technical references are listed in the postscript.)

Of course, the height of the sea tide varies with the 18.6 year lunar declination cycle, and most obviously varies with the moon’s monthly cycle about the Earth. Yesterday was the highest tide and it occurred on the morning the day before the Full Moon.

Of the three Super Moons this year, tonight’s will come closest to Earth and thus appear the largest.

I am going to be out exercising again tonight, and watching the Full Moon come up.

For the Pagan, the Full Moon represents a time to be grateful. I am grateful that today my daughter is released from two weeks of mandatory quarantine having returned exactly two weeks ago from New York. I am grateful.

If it is the case that failed scientific paradigms are not disproven, but rather they are replaced. We need a new theory of climate, and it could begin with understanding the sea tides and how they vary with the weather during each calendar year, and also the climate over millennia.

Howard Brady wrote to me a year or so ago:

There is increasing evidence that such a wide occurrence of a high sea level stand, especially in the Southern Hemisphere, cannot be interpreted as due to crustal movements (Glacial Isostatic Adjustments -GIAs) in different continents at the same time as these areas did not experience any significant glacial or ice crustal loading during the last ice age advances.

Basically, there is now so much data on this fall in sea level from a high-level stand that the GIAs quoted by Dutton and Lambeck 2012 should be abandoned. A few references to peer reviewed articles describing a high sea level stand in the HTM and the fall in sea-level from 8000 -2000 BP are listed below. There is no justification for any glacio-eustatic uplift since 8000 BP that stopped (for some unknown reason about 2000 BP) in regions that did not experience any ice loading during the last glaciation.

Baker,R.G.V., Haworth,R.J., Flood,P.G; 2001. Inter-tidal fixed indicators of former Holocene sea levels in Australia; a summary of sites and a review of methods and models. Quaternary International 83-85. 257-273.

Clement, A, Whitehouse,P, Sloss,S 2015. An examination of spatial variability in the timing and magnitude of Holocene relative sea-level changes in the New Zealand archipelago. Quaternary Science Reviews. Volume 131, Part A. January 2016, Pages 73-101

Haworth,R.J., Baker,R.G.V., Flood,P.G; 2001. Predicted and observed Holocene sea-levels on the Australian coast: what do they indicate about hydrostatic models in far field sites? Journal of Quaternary Research 17. 5-6.