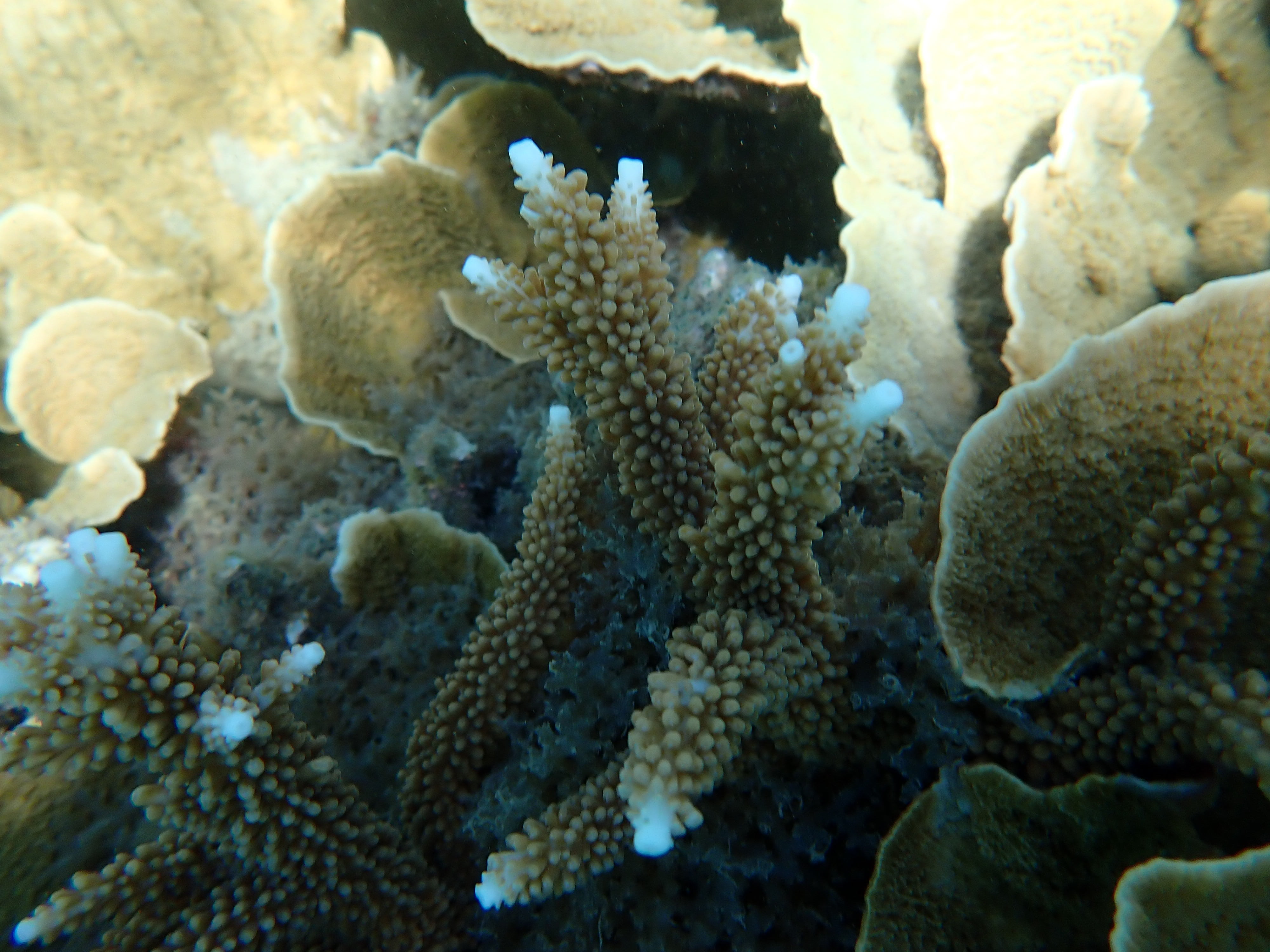 CORAL reefs in shallow waters adjacent to the Australian mainland are considered particularly susceptible to coral bleaching, and also smothering by sediment from turbid water. This was all lamented a week or so ago, including by Sussan Ley, the Federal Environment Minister. Relying on a review of more than 1,000 reports by academics who don’t get out enough, she told the nation that the prognosis for the Great Barrier Reef, and particularly inshore reefs, is very poor.

One of the papers that helped shaped this opinion is by Tara Clark (and colleagues) entitled ‘Historical photographs revisited: A case study for dating and characterising recent loss of coral cover on the inshore Great Barrier Reef’ published by Nature (DOI: 10.1038/srep19285).

The historical photographs were taken circa 1890 and 1915 of corals in the vicinity of Stone Island, off Bowen, and they show healthy corals including species of the branching coral Acropora spp.. The historic photographs have Gloucester Island and Gloucester passage as an iconic backdrop.

Tara Clark and colleagues concluded in the peer-reviewed paper published in 2016 that:

Using a combination of anecdotal, ecological and geochemical techniques, the results of this study provide a robust understanding of coral community change for Bramston Reef and Stone Island. In the late 19th and early 20th Century, historical photographs revealed large and abundant living tabular Acropora sp. and massive faviid colonies at Bramston Reef and high cover of both plating and branching Acropora sp. colonies at Stone Island. By contrast in 1994, no living Acropora colonies were found at either location and the majority of the large faviids that featured so prominently at Bramston Reef in c.1890 were dead, covered in algae and/or mud.

In 2012 (eighteen years later), Bramston Reef was still characterized by many large faviid colonies, dead and overgrown by algae and sediment, as well as a large number of small living faviid colonies. Yet there was evidence of some small increase in coral cover, primarily driven by tabular Acropora sp. and other genera. In addition, living faviid colonies that appeared to be of equal size to their predecessors were also found in 2012, albeit scarc. At Stone Island, the reef crest was similar to that observed in 1994 with a substrate almost completely devoid of living corals.”

I visited Stone Island late August, and was surprised to find an abundance of Acropora spp. forming both plate and branching colonies. I saw and photographed large pink plate coral on 25th August — some more than 1 metre in diameter — at the reef edge just 30 metres from where Tara Clark and colleagues ended their transect as published in Nature.

I’ve named this coral reef — that Clark and others claim doesn’t exist — Clint’s reef after Clint Hempsall, the underwater cinematography who spent over an hour filming there on 25th August 2019.

This footage will hopefully be included in the film we are making about the inner reefs of the northern Whitsundays: an area that includes Bowen harbour and Stone Island. The footage should also be archived, so that like the 1890 and 1914 photographs it is available as a historic record, a snapshot in time of the state of these reefs.

The two days later, on 27th August, we visited a reef just around the headland from Clint’s reef, in the southern corner of the north-facing bay at Stone Island. The coral coverage here was much more extensive, and this bay also has a view across to Gloucester Island and Gloucester passage.

At this reef, that I’m calling Beige reef, my colleagues Rob McCulloch and Walter Starck estimated close to 100% coral coverage over perhaps twenty-five (25) hectares. I want to return to this reef and map it with my drone (Skido, of course).

There are two dominant coral species at Beige Reef – an Acropora sp. and Turbinaria mesenterina.

There are apparently over 130 species of Acropora and I would be keen to know the actual species at Beige reef… with these florescent tips.

Does anyone want to hazard a guess as to the specific species of Acropora that I have photographed?

It is possible to see the corallite and the tentacles in the close-up photograph.

I’m just learning how to take such pictures that are important for accurate coral identification. The next stage will be to include a scale, for reference … to know the size of the corallites.

Beige reef is a shallow inshore reef that would be more suspecting to bleaching from both exposure at low tide and also the water heating-up than any of the other reefs I snorkelled off-Bowen. Yet surprisingly there was little evidence of bleaching here — or at the other reefs.

The most damaged of the eight reefs that we snorkelled was at Middle Island, with much of the reef to the south-west of the island reduced to rubble by Cyclone Debbie which struck in early 2017.

The other dominant coral species at Beige Reef is Turbinaria mesenterina. This is a type of foliose coral in the family Dendrophylliidae. The individual polyps fuse to form what are called unifacial laminae, that look something like lettuce leaves made of limestone and all with a white trim.

I’ve read that this coral can self-clean, which is perhaps handy given it lives in relatively turbid inshore waters. Indeed there are mudflats and mangroves at Stone Island, and the Abbot Point coal terminal is not far away, as shown on the map.

These ‘lettuce leaf’ corals were mostly beige in colour, though there were also corals of the same species (T. mesenterina) that were a deep purple, as shown in the second photograph at the very top of this blog post. Both the purple and white forms have the same white trim around the perimeter. 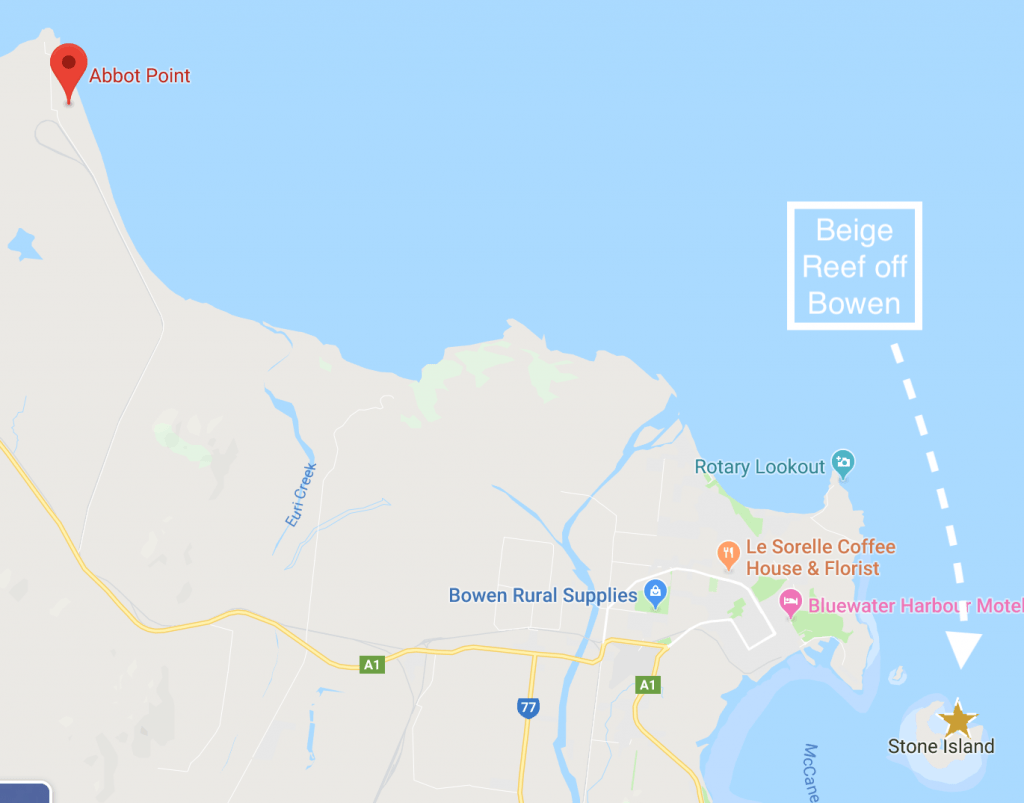 At Beige reef there are a lot of corals that are a delicate beige colour, which is perhaps not for everyone. But I thought it a most beautiful coral reef.

It is a pity that this reef, Beige reef, is denied in the scientific report by Tara Clark and colleagues as published by Nature in 2016. And I find it surprising that Minister Ley can be so negative about the inshore reef because this was not my experience at all having just spent 10 days exploring 8 mostly inshore reefs in the Whitsundays including Beige and Clint Reefs that fringe Stone Island.

UPDATE 06/09/2019: THERE WAS AN ERROR WITH A DATE (I PHOTOGRAPHED THE PLATE CORAL AT CLINT’S REEF ON 25TH, NOT 26TH) AND I’VE MADE A COUPLE OF OTHER EDITS JUST NOW … 1PM ON 6TH SEPTEMBER. THANKS FOR YOUR PATIENCE. ALSO, I’VE ADDED A PHOTOGRAPH. I SHALL STOP NOW. JEN

***
Beige reef has been flown over with my drone, and there is over an hour of underwater cinematography from Clint Hempsall. This footage all needs to be archived … but first some of it will hopefully be included as part of a short film just on Beige reef and then there will be the longer film about all eight reefs. Subscribe at my website so you know when.