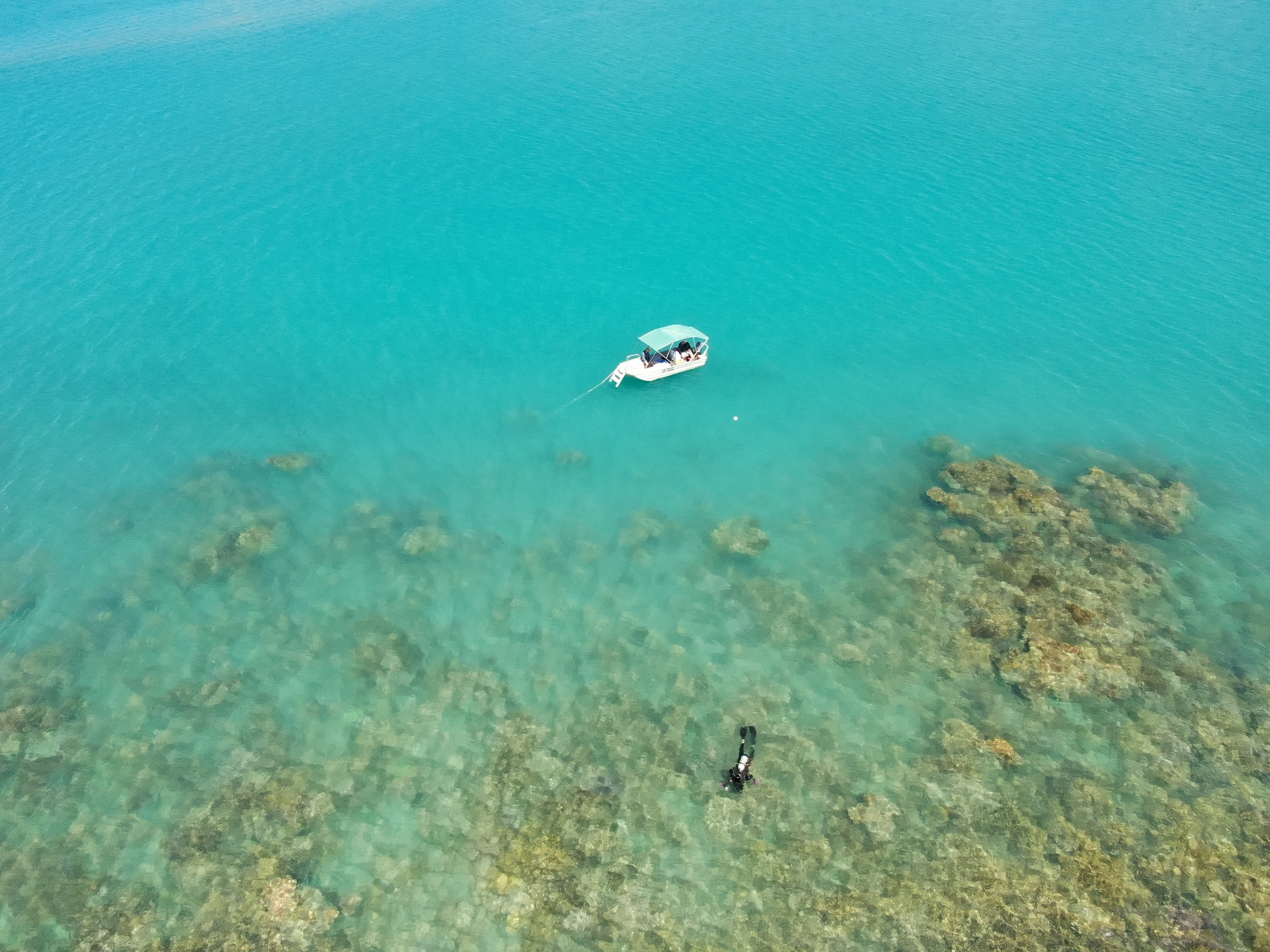 I’VE spent the last 10 days snorkelling, paddle boarding, and droning over the coral reefs of the northern and southern Whitsundays. I’ve been with a great crew including Clint Hempsall who has an underwater camera and he has taken so much footage … been filming underwater all of this time.

We started at Horseshoe bay that is right in Bowen township … in fact there is a coffee shop within perhaps 250 metres of the southern headland where there are a great diversity of colourful corals growing on the granite, and there is a lifeguard.

I was surprised to see such colourful, healthy corals straight-off the beach and so accessible from the mainland/a north Queensland town. A family can train/bus/drive to this local beach at Bowen and go snorkelling and find many of the corals found throughout the Great Barrier Reef. Indeed, the bays and headlands around Bowen offer an opportunity for anyone to see corals, without spending a lot of money.

Bramston Reef is also off-Bowen, just to the south from the end of Ocean View Drive. It is possible to park a car here and walk out across the mudflat that is teeming with life, then across the reef flat with Halimides and red starfish … then there is so much coral. This coral reef looks very different to Horseshoe Bay. The corals are mostly brown, but there are also pinks and greens and they are large and spread over perhaps 40 hectares, it would be great to map this area but much of it falls under a no-fly zone which is the approach to Bowen airport and so I haven’t been able to fly my drone there … but I have gone out over it on my paddle boat. That was so much fun.

I have also snorkelled over Butterfly reef on the Southern Whitsundays … a uniquely different reef with lots of very yellow soft corals. That day I also jumped-in at Luncheon reef and saw an old Porites (dead) now with a layer of a brilliant blue encrusting coral growing over it. And there were so many fish, and also seagulls. You look back to the islands and they are covered in Hoop pine. It is so pretty: above and below the water.

I didn’t see any coral bleaching, but there was some damage from crown-of-thorn at Luncheon reef.

Most of the last 10 days has been at Stone Island, which is just off Bowen and has so many unique and different reefs around it.

I know that at its narrowest it is 1.3 km between the mainland and Stone Island because I had originally intended to do all of this on my paddle board and was measuring distances … as it turned out my friend Rob McCulloch bought a boat down from Cairns for this part of our project.

Attached is an aerial view from my drone (Skido) looking down on Clint Hempsall with his underwater camera and oxygen tank at what I’ve named Clint’s reef, off the south western edge of Stone Island. This reef has some beautiful pink plate corals, and a lot of stoney corals (what look like Porites). There are also various soft corals. On the mud flat we saw so many sea cucumbers, and there was a whale breaching off shore that day, not to mention all the green turtles (perhaps 8 along a stretch travelling/boating slowly for perhaps 10 minutes).

Just around the corner to the north east from Clint’s reef is the eastern facing bay at Stone Island. There are large bombies covered in different corals to the north, but my very favourite reef is in the south western corner of this bay … I’m calling it Beige Reef. There is nearly 100 percent coral cover over at least 20 hectares here … and so much foliose corals that are a delicate light beige colour with a white trim: image lettuce leaves in a hard limestone in these colours. Scattered amongst these corals are off-white Acropora (staghorn corals) with fluorescent purple tips and so many little Damsel fish, mostly black in colour. This coral garden is truly a sight to behold. Not particularly colourful, but rather subtle, beautiful, textured and with the light dappled through as I swam over.

So, I’ve had a wonderful 10 days so far … and I’m still to visit Middle Island today (Saturday) and Bait Reef on Sunday.

I will be in Mackay Monday night (2nd September) to give a talk about all of this at the Ocean International Resort, 1 Bridge Road, Illawong Beach, Mackay from 7pm.

Clint Hempsall will put together a few minutes of underwater footage with a focus on Beige reef … and this will also feature the the rest of the team on the boat and also some of us snorkelling and diving.

I hope to see you there!

****
The feature image shows Clint Hempsall filming underwater off the southern end of Stone Island (off Bowen) this year on my birthday, which was 26th August. I took the picture from my drone, called Skido.

I also have many minutes of aerial drone footage of this scene with the water washing against the edge of reef. I’m hoping the scene will make it into our film documenting the 2 weeks (in total) that we will have spent exploring the Whitsundays this August/September 2019.

This adventure has been funded by the B. Macfie Family Foundation through the Institute of Public Affairs.