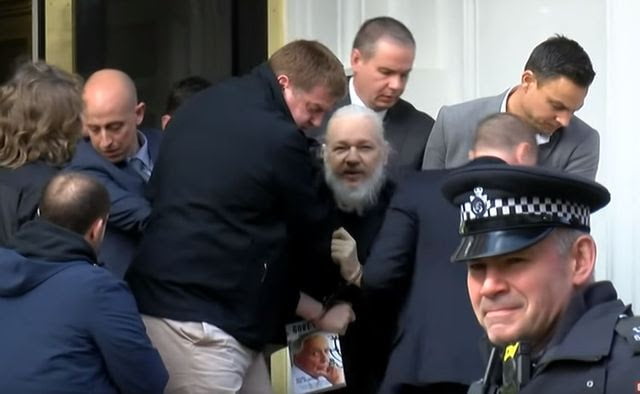 I unequivocally support freedom of speech, and especially freedom of the press.  We need more outsiders like Julian Assange who take on the elites and the industrial military complex … and fearlessly publish without redaction.

Much in the opinion piece published today by the WSWS articulates my concerns:

“The World Socialist Web Site emphatically condemns the forcible seizure and arrest of WikiLeaks founder Julian Assange. We call for an all-out campaign in the UK and internationally to defend Assange, oppose his extradition to the United States, and secure his freedom and return to Australia, with guarantees against any future prosecution.

“Assange is in grave peril. The US Justice Department has issued a statement claiming that Assange only faces charges that could lead to a prison sentence of up to five years if he has been found guilty. This is a transparent lie, the purpose of which is to facilitate Assange’s extradition and provide the Ecuadorean and British governments with a pretext that they are not turning Assange over to a government that might subject him to torture and execution.

If he is transferred to the custody of the United States, anything is possible, including charges of treason that carry a death penalty or indefinite detention as an “enemy combatant”.

Assange has become a target because he did what journalists are supposed to do—expose the truth. Along with Chelsea Manning, who remains in prison for refusing to testify against the WikiLeaks publisher, Assange exposed the crimes that emerged out of wars launched on the basis of lies, which have led to the deaths of more than one million people.

New crimes are now being prepared. Even as the conspiracy against Assange was unfolding, Trump was meeting with Al-Sisi, the butcher of Cairo, and Secretary of State Mike Pompeo was issuing threats against Iran.

Everyone involved in this crime stands guilty of a monstrous attack on fundamental democratic rights, without even the pretense of due process.

Ecuadorian President Lenín Moreno, beset by a domestic crisis provoked by popular opposition to his corrupt administration, and desirous of economic aid offered by the White House, broke Ecuador’s own asylum laws to force Assange out. Its actions are a violation of the honor of Ecuadorean workers, who overwhelmingly support Assange.

The UK government, headed by Theresa May, is gloating over Assange’s arrest, issuing statements that are clearly prejudicial to any legal proceedings. When May, speaking to parliament, declared the “whole house will welcome the news this morning that the Metropolitan police have arrested Julian Assange,” Tory MPs and many Laborites cheered in approval.

Labour Party leader Jeremy Corbyn issued a pro-forma statement declaring that the extradition of Assange “should be opposed by the British government,” but he kept his mouth shut when May issued her denunciation before parliament and has maintained a silence on Assange during his forced asylum in the Ecuadorean embassy.

As for the United States, while the Trump administration is now leading the campaign against Assange, the Democratic Party is solidly behind his persecution, blaming Assange for contributing to the exposure of the crimes for which Hillary Clinton was justly and massively hated. One of the central aims of the Democrats’ anti-Russia campaign has been to justify the attack on WikiLeaks as part of a broader campaign for internet censorship.

Added to the list of those responsible is the pseudo-left, the organizations of the upper middle class in the US and internationally, which seized on the initial fraudulent and trumped-up rape allegations against Assange to justify his persecution and their own cowardly abandonment of Assange to American imperialism.

For its part, the establishment media, which functions as an arm of the state, has jumped in to support the attack on Assange.

On Thursday evening, the editorial boards of the New York Times and the Washington Post issued statements supporting Assange’s extradition. “The government charged Julian Assange, founder of WikiLeaks, not with publishing classified government information, but with stealing it,” declared the New York Times, adding “The administration has begun well by charging Mr. Assange with an indisputable crime.”

The Washington Post was even more open in its support of the Trump administration’s campaign against Assange, declaring “Mr. Assange’s case could conclude as a victory for the rule of law, not the defeat for civil liberties of which his defenders mistakenly warn.”
“Mr. Assange is not a free-press hero,” declares the Post. “Unlike real journalists, WikiLeaks dumped material into the public domain.” By the Post ’s definition, the only “real journalists” are those that self-censor at the behest of the Pentagon.

These newspapers, which once published the Pentagon Papers, are nothing but apologists for US imperialism. One can only imagine the howls of outrage that would issue from the media if it was the Russian government that had carried out the forcible seizure and arrest of a journalist and critic of its foreign policy!

In the seven years of Assange’s confinement in the Ecuadorean embassy, much has changed. Most significant is the eruption of class struggle internationally. It is the fear of the emergence of the class struggle, combined with growing opposition to capitalism, that is compelling the ruling elites to destroy all democratic rights, including the freedom of expression, of which Assange’s persecution is the most grotesque example.

In the working class there is overwhelming sympathy for Assange. A dividing line has opened up in social, economic, and political life. The ruling elites are shedding their democratic pretenses. Their media and the pseudo-socialist opposition—the representatives of the politics of the affluent upper-middle-class—function as defenders of the state and the dictatorship of the financial oligarchy.

It is the working class, the broad mass of the population, that must be mobilized to defend Julian Assange, Chelsea Manning and all class war prisoners. The demand for their freedom must be a rallying cry for the global working class.

The World Socialist Web Site calls on all workers and young people, and all those who uphold democratic rights, to come forward and take an unequivocal stand in defense of Julian Assange. Organize meetings, protests and demonstrations to demand his immediate release and his safe return to Australia!

Statement of the World Socialist Web Site Editorial Board.