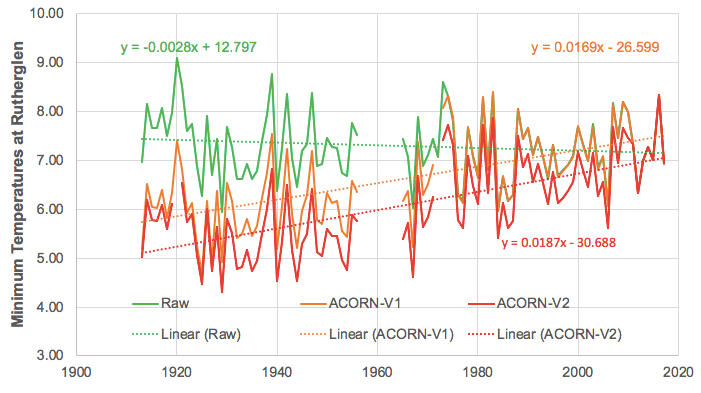 COOLING the past relative to the present has the general effect of making the present appear hotter – it is a way of generating more global warming for the same weather.

The Bureau of Meteorology has rewritten Australia’s temperature in this way for the second time in just six years – increasing the rate of warming by 23 percent between Version 1 and the new Version 2 of the official ACORN-SAT temperature record.

Temperatures from the Rutherglen research station in rural Victoria are one of the 112 weather stations that make-up ACORN-SAT. Temperature have been changed here by Blair Trewin, under the supervision of David Jones at the Bureau.

Dr Jones’s enthusiasm for the concept of human-caused global warming is documented in the notorious Climategate emails, during which he wrote in an email to Phil Jones at the University of East Anglia Climatic Research Unit on 7 September 2007 that:

“Truth be known, climate change here is now running so rampant that we don’t need meteorological data to see it.”

We should not jump to any conclusion that support for human-caused global warming theory is the unstated reason for the Bureau’s most recent remodelling of Rutherglen. Dr Jones is an expert meteorologist and an honourable man. We must simply keep asking,

“What are the scientifically valid reasons for the changes that the Bureau has made to the temperature records?”

In 2014, Graham Lloyd, Environmental Reporter at The Australian, quoting me, explained how a cooling trend in the minimum temperature record at Rutherglen had been changed into a warming trend by progressively reducing temperatures from 1973 back to 1913. For the year 1913, there was a large difference of 1.7 degrees Celsius between the mean annual minimum temperature, as measured at Rutherglen using standard equipment at this official weather station, and the remodelled ACORN-SAT Version 1 temperature. The Bureau responded to Lloyd, claiming that the changes were necessary because the weather recording equipment had been moved between paddocks. This is not a logical explanation in the flat local terrain, and furthermore the official ACORN-SAT catalogue clearly states that there has never been a site move.

Australians might nevertheless want to give the Bureau the benefit of the doubt and let them make a single set of apparently necessary changes. But now, just six years later, the Bureau has again changed the temperature record for Rutherglen.

In Version 2 of ACORN-SAT for Rutherglen, the minimum temperatures as recorded in the early 1900s, have been further reduced, making the present appear even warmer relative to the past. The warming trend is now 1.9 degrees Celsius per century.

The Bureau has also variously claimed that they need to cool that past at Rutherglen to make the temperature trend more consistent with trends at neighbouring locations. But this claim is not supported by the evidence. For example, the raw data at the nearby towns of Deniliquin, Echuca and Benalla also show cooling. The consistent cooling in the minimum temperatures is associated with land-use change in this region: specifically, the staged introduction of irrigation.

Australians trust the Bureau of Meteorology as our official source of weather information, wisdom and advice. So, we are entitled to ask the Bureau to explain: If the statements provided to date do not justify changing historic temperature records, what are the scientifically valid reasons for doing so?

This type of remodelling will potentially have implications for understanding the relationship between past temperatures and bushfire behavior. Of course, changing the data in this way will also affect analysis of climate variability and change into the future. By reducing past temperature, there is potential for new record hottest days for the same weather.