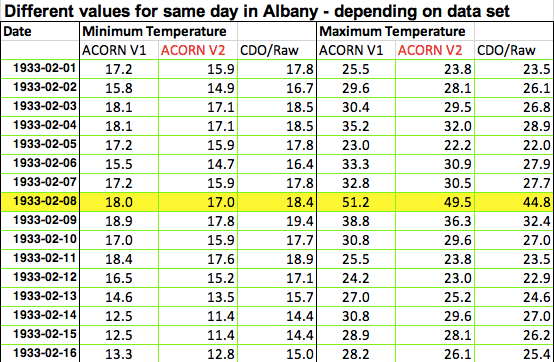 THE Australian Bureau of Meteorology keeps remodelling the temperature record for Australia – and not just by a little bit. Temperatures are changed through a process known as homogenisation, and then changed again, sometimes by as much as 6.4 degrees Celsius for the one day.

Changing the temperature record like this is not unusual for institutions such as the Australian Bureau of Meteorology, though the extent of the change for Albany on this day in 1933, and also the direction of the change, is unusual.

Given the magnitude and direction of this change to the Albany temperatures, which was first made six years ago, several of us asked the Bureau: ‘Why’?

Why was the temperature at Albany on this day (February 8, 1933) adjusted-up by so much (6.4 degrees) in the official version 1 of the ACORN-SAT dataset that was published six years ago?

I never got an answer.

I have simply been told, mostly via the mainstream media, that homogenisation is world’s best practice, and that ACORN-SAT is scientific.

Of course, it is not scientific to make such changes to temperature measurements, though this type of change – this remodelling – is standard practice not only for our Bureau but also for the custodians of the global temperature datasets relied upon by the IPCC (United Nation’s Intergovernmental Panel on Climate Change).

While ACORN-SAT Version 1 contains remodelled temperature values that can vary from the actual recorded measurement by more than 6 degrees, the values in this same database are often referred to as ‘observations’ as though they represent real measurements. For example, when leading climate scientist Sophie Lewis and David Karoly published a paper in the American Meteorological Society journal about ‘extreme events’ they erroneous refer to ACORN-SAT Version 1 values as ‘observations’.

Indeed, ACORN-SAT Version 1 has underpinned almost all the climate change work at our universities and at CSIRO over the last 6 years.

Most climate scientists seem to want to believe that the temperature values that they are working with represent real measurements. But they don’t!

Just recently this ACORN-SAT database – used by Lewis, Karoly and thousands of other scientists here in Australia and also overseas – was updated. Dr Blair Trewin at the Bureau has re-adjusted temperature values yet again, creating ACORN-SAT Version 2.

The integrity of the historical temperature record is of extraordinary importance. This record also underpins belief in catastrophic human-caused global warming.

Perhaps today’s front-page story in The Australian newspaper by Graham Lloyd will generate some interest in how and why our climate history can be so change, apparently at the whim of the Bureau and other such institutions around the world.