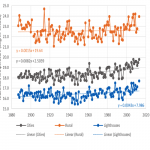 MICHAEL Brissenden, considered one of Australia’s most experienced journalists, failed on so many counts with the Four Corners documentary ‘Weather Alert’. He suggested that wine grower’s Brown Brothers are relocating at least part of their … END_OF_DOCUMENT_TOKEN_TO_BE_REPLACED