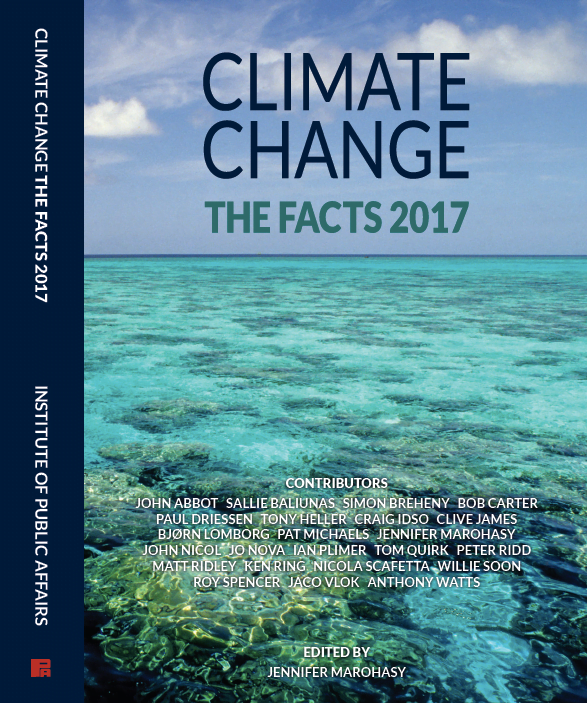 “Iconic, ailing Australian satirist Clive James has penned a savage essay on climate change alarmism, controversially cooking everyone from Barack Obama to Kevin Rudd to Tim Flannery to Al Gore to Donald Trump in the boiled and rising ocean of his wit…”

The essay in The Inquirer section of the same newspaper is an extract from chapter 22 of the book I have been working on for many months now.

Contributors to Climate Change: The Facts 2017 do not conform to a unitary view.   As I explain in the book’s introduction:

“An advantage of my approach in the compiling of the chapters for this book – an approach where there has been no real attempt to put everything into neat boxes – is that there are many surprises. I am referring to the snippets of apparently anomalous information scattered through the chapters. These can, hopefully, one day, be reconciled. As this occurs, we may begin to see the emergence of a coherent theory of climate – where output from computer-simulation models bears some resemblance to real-world measurements that have not first been ‘homogenised’.

“There are many chapters in this book about ‘homogenisation’ (chapters 5, 6, 7, 8 and 9 by Anthony Watts, Tony Heller, Dr Tom Quirk, Jo Nova and me, respectively). Homogenisation, in essence, involves the remodelling of data, and is now a technique integral to the development of key official national and global measures of climate variability and change – including those endorsed by the IPCC.

It is generally stated that without homogenisation temperature series are unintelligible. But Dr Jaco Vlok from the University of Tasmania and I dispute this – clearly showing that there exists a very high degree of synchrony in all the maximum temperature series from the State of Victoria, Australia – beginning in January 1856 and ending in December 2016 (chapter 10). The individual temperature series move in unison suggesting they are an accurate recording of climate variability and change. But there is no long-term warming trend. There are, however, cycles of warming and cooling, with the warmest periods corresponding with times of drought.

Indeed, some climate sceptics consider the homogenisation technique used in the development of the official temperature trends to be intrinsically unscientific. They consider homogenisation a technique designed to generate output consistent with the computer-simulation models, which, in turn, are integral to the belief that there are consistent year-on-year temperature increases – contrary to the actual measurements. Temperature series that are a product of homogenisation could be considered ‘alternative facts’ – although, ironically, this is a term newly minted by those who generally agree with these self-same homogenised (remodelled) temperature constructs.”

Climate Change: The Facts 2017 is available for pre-order http://thefacts2017.ipa.org.au

Media enquiries should be directed to the IPA’s Media and Communications Manager, Evan Mulholland on 0405 140 780 or emulholland@ipa.org.au