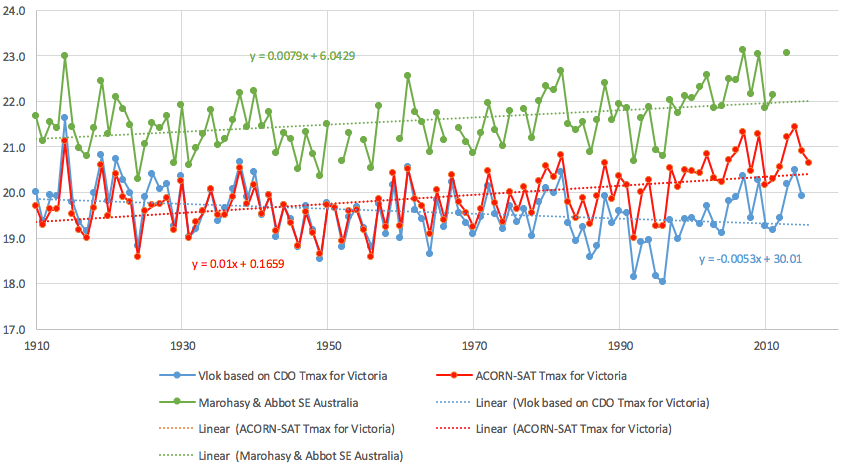 Media reports yesterday claimed that 2016 was another record hot year. However, close scrutiny of all the temperature data from the state of Victoria paints quite a different picture. When all 289 temperature series from Victoria are simply combined, the hottest years are in the early part of the record. In particular, 1914 is very evidently the hottest year on record – see blue time series in Chart 1. This finding builds on a recently published book chapter focused on south-east Australia, and is part of a larger study working towards a realistic reconstruction of Australia’s temperature history.

Yesterday the Australian Bureau of Meteorology released its Annual Climate Statement, claiming 2016 to be the fourth-warmest year on record for Australia – and also an unusually wet year. Wet years are usually much cooler years, but because the overall trend in the ACORN-SAT* time series shows significant warming, even a wet year comes out as relatively hot.

Of course there is no one place in Australia where the average temperature can be measured; so the Bureau relies on a reconstruction to determine how hot 2016 was, relative to the historical record. Their method, however, is quite subjective in terms of choice of locations to include, the method used to remodel the individual temperature series before they are combined (this is refered to as homogenisation*), and the area weighting applied – with the weighting changing on a daily and monthly basis.

Late last year, I had a book chapter, co-authored with John Abbot and published by Elsevier*, which shows historical temperature trends for south-east Australia from 1887 to 2013 based on a more transparent system – that can be easily replicated. We choose the longest continuous series, used the same series to calculate every value, and applied an area weighting based on topography and landuse – and did not remodel individual temperature series. In the chapter we conclude that temperature trends for south-east Australia are best described as showing statistically significant cooling (yes cooling) of 1.5 degree Celsius from 1887 to 1949, followed by warming of nearly 2 degrees Celsius from 1950 to 2013. The warmest year in this reconstruction is 2007, followed very closely by 1914.

Postscript: I have expanded on this analysis in an article just now published by Graham Young at OLO. Jennifer, Noosa, Monday 9th January, 2017.

* ACORN-SAT stands for Australian Climate Australian Climate Observations Reference Network – Surface Air Temperature and is a dataset developed by the Bureau based on a subset of available temperature series, almost all homogenised, and then combined with an area weighting and used to report climate variability and change. The annual climate statement for 2016, based on this ACORN-SAT dataset, is here: http://media.bom.gov.au/releases/333/2016-a-year-of-extreme-weather-events/

* Homogenisation involves changes to measured temperature values ostensibly to correct for non-climatic variables. These changes to the observational data are quite different from quality assurance. For example, the need for homogenisation most often results from a ‘statistical test’ detecting a break point, these breakpoints often occur after a period of missing data. In response all values preceding the breakpoint are often reduced by a specific amount back to 1910. The amount by which the measured observational values are reduced is determined through the application of algorithms and calculated relative to what are referred to as ‘neighbouring’ stations, which may be Urban Heat Island (UHI) effected, and/or located many hundreds of kilometers from the target location.