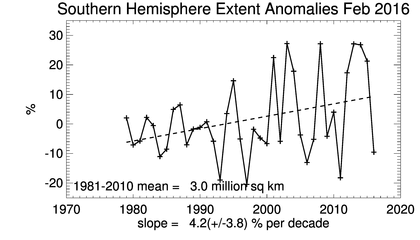 LEADING climate scientists were not acknowledging “the pause” in global warming, even though it was very apparent in the satellite-based temperatures of the lower troposphere. That was until last month.

The February update to this satellite record has broken previous records for the northern hemisphere, and indicates that global temperatures are once again on the rise, Chart 1.

Some have attributed this warmth to an El Nino. Mean sea level pressures, and sea surface temperatures, are consistent with an El Nino, but not a super-El Nino that would result in record high temperatures.

Most of the warmth in the lower troposphere appears to have been recorded in the northern hemisphere, Chart 1 (top).

The super-El Nino in 1997, manifested as a record hot year in the tropics in 1998, Chart 1 (middle). This is what we might expect of an El Nino, which is often defined as extensive warming of the central and eastern tropical Pacific.

The apparent lack of warming in the southern hemisphere in February, could be due to the huge recent melt at the Antarctic. Yes, melt. While the Artic has been melting, there had been growth in the extent of ice at the Antarctic over recent years.  Until February 2016, when it crashed, Chart 2.

A friend, Lance Pidgeon, emailed me: “The heat sucked into the melting ice would be a very large amount. It looks like the southern hemisphere sea ice anomaly went rapidly from about +1.8 million square kilometers to -0.5. This is 2.3 million of the total southern hemisphere area (255 million). Close enough to 1% of the area suddenly also began to absorb rather than reflect back due to the decrease in albedo.”

I can’t explain the apparent sudden surge in global warmth, and I don’t know anyone who predicted its magnitude.

While the Australian Bureau of Meteorology started forecasting an El Nino from 2013, back in March 2014, Ken Ring is on record specifying that the next El Nino wouldn’t manifest until late 2015 to correspond with the minimum declination of the moon, and following what he predicted would be the year of Solar Minimum.  For those interested in lunar cycles, a minimum declination occurs every 18.6 years, so the last one corresponded with the super El Nino of 1997/1998.

The late Bob Carter would assure us that climate always changes, and that the warming that occurred this February 2016 is still very much within the range of natural variability.

I’m not going to quibble with this, and global temperatures may be dropping again by April, once the El Nino has decayed. Nevertheless, the capacity of sceptics to thumb their nose at the scientific consensus by drawing attention to “the pause” has been dealt a blow by the recent melt at the Antarctic, and the February update to the Satellite record.