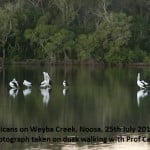 OUTSPOKEN critic of catastrophic global warming theory, Bob Carter, died in Townsville on Tuesday. Professor Carter did not like the term sceptic, he considered himself a rationalist, and popular usage of the term ‘climate change’ a tautology. As … END_OF_DOCUMENT_TOKEN_TO_BE_REPLACED