ONE of the longest continuous sea level measuring gauges is not far from the Sydney Opera House at Fort Denison. The mean sea level trend is 0.65 millimetres per year based on monthly sea level data from 1886 to 2010. 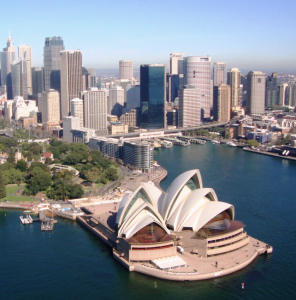 Except that sea levels haven’t trended consistently up each year but rather follow 50-60 year cycles, then there is the impact from El Nino events, and of course the moon is responsible for the neap tides and the king tides.

To be clear, that is NOT 0.65 centimetres per year, but rather MILLImetres per year. Tiny. Particularly given much of the New South Wales coastline has sustained an approximate 2 metre drop in sea levels over the last few thousand years. Not a 2 centimetre drop, but a 2 metre drop. This is not controversial, but rather a well-established fact in the technical literature. The arguing is not that the fall has been of this approximate magnitude, but whether the approximate 2 metre fall in sea levels has been more-or-less continuous or through step changes.

In the scheme of things the rise since 1886 is but a blip in an otherwise falling trend. Of course go back just 16,000 years and sea levels were rising, and significantly faster than at present. Yes. The climate changes.

But, what about Tuvulu, I hear someone ask? It’s an atoll in the Pacific that is sinking. Add to this pressure from a growing population resulting in the depletion of aquifers, and saltwater intrusion can give the false impression of sea level rise.

But none of this is new information to readers of this blog. What is new, is that Bob Carter and colleagues have just written a long report pointing out that there are wide variations in rates of tectonic uplift and subsidence (sinking) around the world at particular times and that any coastal management plan for New South Wales should be based on a good understanding of the local geology, as well as long-term rates of sea level rise. Professor Carter’s new report also suggests that in order to create an impression of sea level rise, rather than just plot raw data, there is a good amount of homogenization. In particular, the high sea-level rise figure of 3.3 mm per year reported for the Fort Denison tide gauge in the report does not represent the original data measurements, but results from computer modeling combined with the selection of a short and atypical section of the available sea-level record.

All this as rebuttal to what might appear to be an innocuous report by Whitehouse and Associates entitled ‘South Coast Regional Sea Level Rise Policy and Planning Framework’. But apparently it could become something of a blue print for the further erosion of the property rights of coastal residents more generally.

Bottom-line: we are unlikely to lose the South Coast or the Opera House to sea level rise from climate change, but it doesn’t hurt to have your own plan in case of a tsunami. According to Ted Bryant, recently retired from the University of Wollongong, six big tsunamis have hit Sydney during the last 10,000 years, the most recent in 1491.

I’m adding this youtube on a bad moon rising for fun.