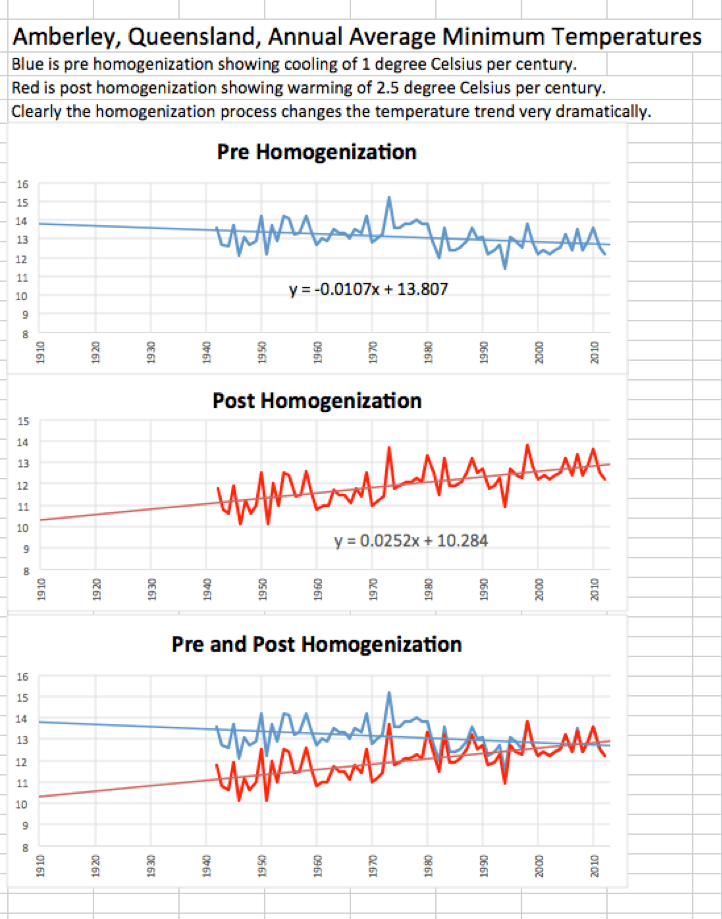 EARLIER this year Tim Flannery said “the pause” in global warming was a myth, leading medical scientists called for stronger action on climate change, and the Australian Bureau of Meteorology declared 2013 the hottest year on record. All of this was reported without any discussion of the actual temperature data. It has been assumed that there is basically one temperature series and that it’s genuine.

But I’m hoping that after today, with both a feature (page 20) and a news piece (page 9) in The Weekend Australia things have changed forever.

I’m hoping that next time Professor Flannery is interviewed he will be asked by journalists which data series he is relying on: the actual recorded temperatures or the homogenized remodeled series. Because as many skeptics have known for a long time, and as Graham Lloyd reports today for News Ltd, for any one site across this wide-brown land Australia, while the raw data may show a pause, or even cooling, the truncated and homogenized data often shows dramatic warming.

When I first sent Graham Lloyd some examples of the remodeling of the temperature series I think he may have been somewhat skeptical. I know he on-forwarded this information to the Bureau for comment, including three charts showing the homogenization of the minimum temperature series for Amberley.

Mr Lloyd is the Environment Editor for The Australian newspaper and he may have been concerned I got the numbers wrong. He sought comment and clarification from the Bureau, not just for Amberley but also for my numbers pertaining to Rutherglen and Bourke.

I understand that by way of response to Mr Lloyd, the Bureau has not disputed these calculations.

This is significant. The Bureau now admits that it changes the temperature series and quite dramatically through the process of homogenisation.

I repeat the Bureau has not disputed the figures. The Bureau admits that the data is remodelled.

What the Bureau has done, however, is try and justify the changes. In particular, for Amberley the Bureau is claiming to Mr Lloyd that there is very little available documentation for Amberley before 1990 and that information before this time may be “classified”: as in top secret. That’s right, there is apparently a reason for jumping-up the minimum temperatures for Amberley but it just can’t provide Mr Lloyd with the supporting meta-data at this point in time.

*****
The two articles in The Australian are behind a pay wall here and here. If you don’t already have a subscription to The Australian take one out today, because the articles are important and Graham Lloyd’s work is worth paying for.