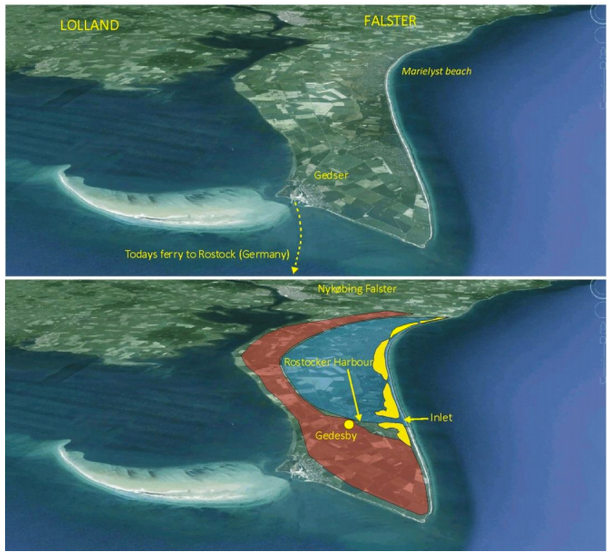 There is nothing sustainable about the current management of the Lower Murray and its crippled estuary. Lakes Albert and Alexandrina are vast shallow near-coastal lagoons that started to dry-up during the recent Millennium drought (2003-2009). Despite legislation to mandate the buyback of over 3,000 GL of water, when the next drought is properly upon us it’s almost inevitable that water levels will again recede and its possible that Lake Albert (without a direct connection to the Murray River or the ocean) could dry-up altogether. If this were to happen, the South Australian government might consider reclaiming the area for farming or as a nature reserve. Indeed forested fields known as the Bøtø Nor in Denmark were once Rostocker Harbour – that was before the inlet to the Harbour became choked with sand.

The region has a similar geological history to the Lower Murray. The gradual melting of the last of the ice sheets in North America, Greenland and Antarctica resulted in significant sea level rise about 7,000 years ago. This resulted in the Southern Ocean flooding into an area of subsidence to the east of the Mount Lofty Ranges in South Australia, an area now known as the Lower Lakes. At about the same time an area of land between Denmark and Germany was flooded.

In southern Australia as the sea pushed in, the Murray River was pushed back. A new estuary began to form with the Southern Ocean initially regularly washing in to the entire area through a wide opening. From the beginning, localised wave action would have deposited sand at the margins of the seaward opening of the young estuary slowly building sand flats, then beaches. Beaches build as sand from wave action is deposited higher and higher. When dry sand from the beach is blown beyond the reach of the waves, and then a bit further, sand dunes start to form.

This process resulted in the development of a string of barrier islands across the lower Murray and also along the modern Danish and German North Sea coast.

Barrier Islands usually form perpendicular to the dominant wave direction. In the case of the Danish coastline, the islands formed about 2 km east of the main coastline, leaving a sheltered area, a fine natural harbour, between the developing peninsula and the island of Falster.

By 1135 the town of Gedesby within Rostocker Harbour was a major port. In 1571 Sofie, queen to the Danish King Frederik II ordered the building of a ferry hotel at the harbour so she had somewhere appropriate to stay en-route to her homeland of Germany. In 1716 Tsar Peter the Great arrived with his ship in Rostocker Harbour and apparently stayed at this same ferry hotel. But within 50 years the entrance to the harbour had been in-filled with sand. Today, the body of water that once provided safe passage to rulers of both Russia and Denmark is a forested field. Gedesby is now located about 1.5 km inland from the modern east coast of Falster.

This article was first published at Myth and the Murray. It draws on information provided in the June 2013 issue of www.climate4you.com and the figure is reproduced from page 30.