WE know that the Australian Bureau of Meteorology can’t forecast weather more than a few days out. So why should we believe a climate forecast to 2030?

According to Sara Phillips, writing for the Australian Broadcasting Corporation, the Bureau’s new State of the Climate 2014 report is a reliable source of information because it distils hundreds of experiments into three consistent reports. 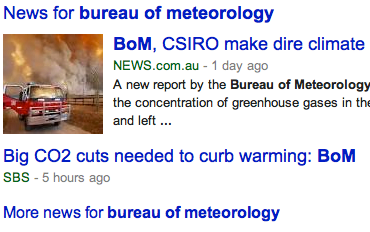 1. Australia’s climate has warmed by 0.9°C since 1910, and the frequency of extreme weather has changed, with more extreme heat and fewer cool extremes.

When I wrote to the Bureau in January asking why the national average is only calculated back to 1910, I received a reply explaining that data prior to 1910 “is often fragmented and of uncertain or low quality”. If this were the case, it begs the question how a global mean temperature can be calculated back to 1880?

This is one of seven questions I’ve put to Greg Hunt, Minister for the Environment, in a letter dated 4th March 2014. Minister Hunt is ultimately responsible for the operations of the Bureau and I’m of the opinion their operations deserve close scrutiny.

There is this myth that the Bureau is comprised of hard working scientists providing, like the Australian Broadcasting Corporation, information without bias or agenda. More likely the Bureau, like the mainstream climate science community more generally, has become somewhat compromised.

Of particular concern to me, is the Bureau’s decision of last June, to discard the statistical models that had been used to generate seasonal rainfall forecasts in favour of a general circulation model that has no predictive skill at all. I have documented the absence of skill in the general circulation model in a peer-reviewed paper recently published in the journal Atmospheric Research (Volume 138, Pages 166-178).

I conclude my letter to Minster Hunt with comment that:

If the temperature record for Australia can be extended back to 1860, providing an additional 50 years of data, then this should be a priority. This information is more important than the calculation of a national average temperature. If data is to be adjusted and homogenized then the methodology applied needs to be clearly stated. Indeed having access to all the available records as far back as possible is important because it helps unravel the true features of the natural climate cycle, a goal that meteorologists and astronomers were working towards well before the establishment of the Bureau in 1908.

In arriving at theories that explain the natural world, the best scientists always use all the available data, not just the data that happens to fit a particular viewpoint. Furthermore, long historical data series are critical for statistical methods of rainfall forecasts, including the application of artificial neural networks that can currently provide more skillful forecasts than POAMA, the general circulation model currently used by the Bureau to produce the official forecasts. That the Bureau persists with POAMA, while failing to disclose to the Australian public the absence of any measurable skill in its monthly and seasonal forecasts, should be of grave concern to the Australian parliament.

My letter to the Minister can be read in its entirety here: http://jennifermarohasy.com/questions-for-the-australian-bureau-of-meteorology/