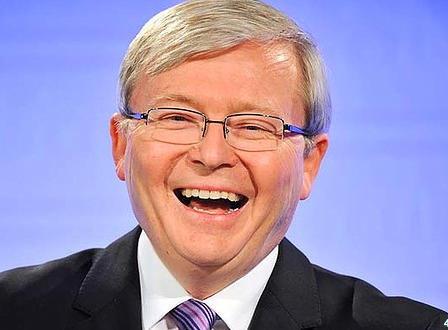 THE Coalition’s attacks on the carbon tax have been more about broken promises than policy, allowing Kevin Rudd to ‘dump the tax’ without actually dumping anything, writes Chris Berg…

“WHEN Julia Gillard promised in 2010 that there would be no carbon tax under a government she led – but that her government would pursue an emissions trading scheme – she probably thought it would defuse a toxic debate and help secure victory.

Like so many of Labor’s ploys in that election, it was far too clever by half. Tony Abbott dined off Gillard’s no-tax promise for three years.

Now it’s Kevin Rudd’s time to dine. On Sunday we learned that he wants to transition from a fixed-price carbon tax to a full-blown floating-price emissions trading scheme one year ahead of schedule. 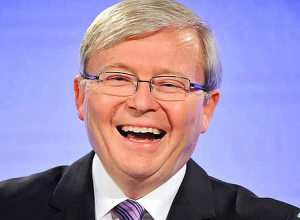 Here’s the riddle: why?

It seems strange to bring this up now. Over the last year or so, anger about the carbon tax has dissipated. Australians like the status quo. The GST swung elections back in its day. It destroyed leaders. John Hewson was one victim. The Howard government almost lost in 1998 because of its proposed great big new tax on everything. But now the GST is completely settled.

Furthermore, Rudd’s fiddling with the carbon scheme isn’t costless. It creates a $4 billion hole in next year’s budget. It exposes the government to charges of policy disarray. The way it was announced (a bare leak to the Sunday papers) recalls one of the worst habits of Rudd’s first outing as prime minister – the obsession with impressive sounding but light on detail ‘announceables’.

But we forget how Gillard’s 2010 bungle completely realigned the debate over Australian climate change mitigation policy. Three years later, her broken promise allows Labor to market Rudd’s minor scheduling change as “dumping the carbon tax”. Even better, they don’t have to actually dump anything.

The distinction between ‘tax’ and ‘trading scheme’ has always been a triumph of semantics over clarity. An emissions trading scheme is a tax. It just happens to be a very complicated one. Just like a simple carbon tax, it prices an externality – pollution. The trick is that firms are allowed to trade their tax liabilities with each other. But that doesn’t make it any less a tax.

(Here’s the Oxford dictionary definition of ‘tax’ if you’re sceptical: ‘a compulsory contribution to state revenue … added to the cost of some goods, services, and transactions’. Under a floating scheme, the added compulsory cost would be the European price of around $6 a tonne. The current fixed Australian price is about $25 a tonne.)

Gillard’s broken carbon tax promise has ruled the debate over climate change policy in these last three years. Before the promise, Tony Abbott was calling Kevin Rudd’s emissions trading scheme ‘a great big new tax on everything’. Afterwards he targeted Julia Gillard’s ‘bad tax based on a lie’.

There is a subtle but important difference in these talking points. The focus on the lie eases political pressure off the policy itself.

Thanks to the Coalition’s rhetorical realignment, it is the carbon tax that is remembered as Gillard’s folly, not the entirety of the climate change program.

Long forgotten is the protracted and contentious debate about mechanisms and international agreements and subsidies and targets and the assumptions of Treasury modelling and the Garnaut Report.

We haven’t heard much about all this in recent years. Australia’s climate mitigation programs include everything from industry subsidies to renewable energy targets to efficiency regulations. Thanks to the broken promise, the whole debate was anthropomorphised. Climate policy was given human form by Julia Gillard and her tax.

Now Gillard is gone and it has all become a bit confused.

Take the efficiency dividend with a grain of salt – it’s the magic beans of public finance.

But cutting industry assistance is a great idea. Rudd should have taken the opportunity to go further. The Productivity Commission counted $5.1 billion in direct budget support for private industry in 2011-12. If you want to reduces expenditure, surely that’s the first place to look.

Unfortunately, the Opposition is lumbered with an absurdly expensive, ludicrously inefficient and gimmicky hodgepodge of climate change policies clumped under the banner of Direct Action.

The Coalition’s shadow climate minister, Greg Hunt, insists his plan is the true ‘market solution’ to climate change, but has not been able to convince anybody of that.

We shouldn’t place too much faith in market mechanisms. Tony Abbott was mocked for his comments about invisibility yesterday but his basic point was right. An emissions trading scheme is not a real market. It is a highly regulated approximation of a market, where supply and demand are artificially created by the government to meet a political goal. (I detailed this argument in the Drum in 2011.) Of course, Abbott’s attack on artificially created markets should apply double to his Direct Action program.

In retrospect, it seems obvious the Coalition’s plan has been propped up by the unpopularity of Gillard’s no carbon tax promise.

As has the whole climate change policy debate. Not for the better.”

This article, written by Chris Berg, was first published at The Drum and is republished here with permission. Chris Berg is a Research Fellow with the Institute of Public Affairs. His most recent book is In Defence of Freedom of Speech: from Ancient Greece to Andrew Bolt. Follow him on Twitter @chrisberg.