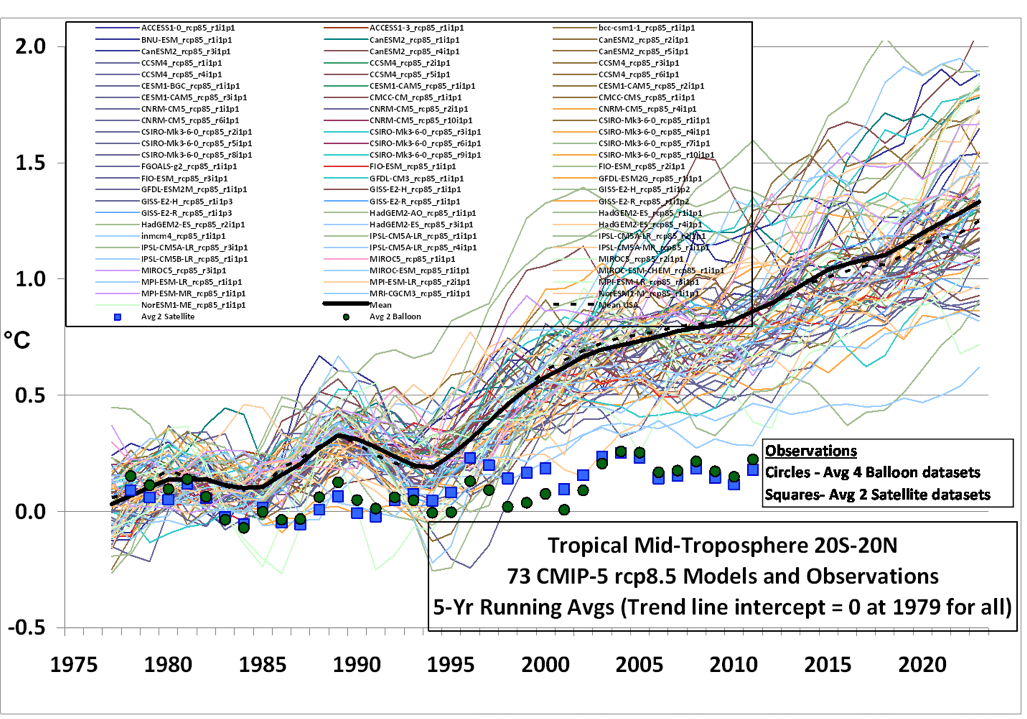 “THE greatest difficulty facing the promoters of the theory that human emissions of carbon dioxide cause dangerous global warming is the inconvenient truth that it is impossible to measure the average temperature of the earth’s surface by any known technology. Without this information it is not possible to claim global warming” writes Vincent Gray in his most recent ‘Truth Newsletter’.

The newsletter continues with an explanation of how a mean global surface temperature anomaly was calculated, and then switches to compare output from General Circulation Models (GCMs) with an all together different method of calculating a global mean temperature using microwave sounders…

“In order to fake this claim the Mean Global Surface Temperature Anomaly Record
(MGSTAR) was fabricated from temperature measurements made at meteorological weather
stations.

It did not matter that

· There is no standardized method for making these observations,

· They are unrepresentative of the earth’s surface,and worse the further back you go.

· Their locations are mainly close to cities,

· Only maximum and minimum temperatures are measured,,

· The number and location of stations changes daily

Despite these disabilities, which would have killed the idea in the days when genuine scientists controlled the scientific journals, the public have been persuaded that this dubious procedure is a genuine guide to global temperature change. They even seem to accept that a change in it over a century of a few decimals of a degree is cause for alarm.

John Christy and Roy Spencer in 1979 at the University of Huntsville, Alabama established an alternative procedure for plotting global temperature anomalies in the lower troposphere by using the changes in the microwave spectrum of oxygen recorded by satellites on Microwave Sounder Units (MSUs). This overcame several of the disadvantages of the MGSTAR method.

It is almost truly global, not confined to cities. Although it misses the Arctic, this is also true of the MGSTAR. There have been some problems of calibration and reliability but they are far less than the problems of the MSGTAR record. They are therefore more reliable.

From the beginning the two records have disagreed with one another. This created such panic that the supporters of the IPCC set up an alternative facility to monitor the results at Remote Sensing Systems under the aegis of NASA and in the capable hands of Frank Wentz, an IPCC supporter. It was confidently believed that the ‘errors’ of Christy and Spencer would soon be removed. To their profound disappointment this has not happened, The RSS version of the Lower Troposphere global temperature anomaly record is essentially the same as that still provided by the University of Huntsville. It is also almost the same as the measurements made by radiosonde balloons over the same period.

The MSU record has now been going for 34 years. Spencer has recently published a
comparison between temperature predictions made by a large number of IPCC climate
models and their projected future and the temperature record as shown by the MSUs
and the balloons.

It is surely obvious that all the models are wrong and that their projections are
nonsensical.

I might also add that the central line is also meaningless. 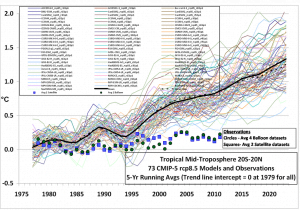 Click on the graph for a better, much larger view…