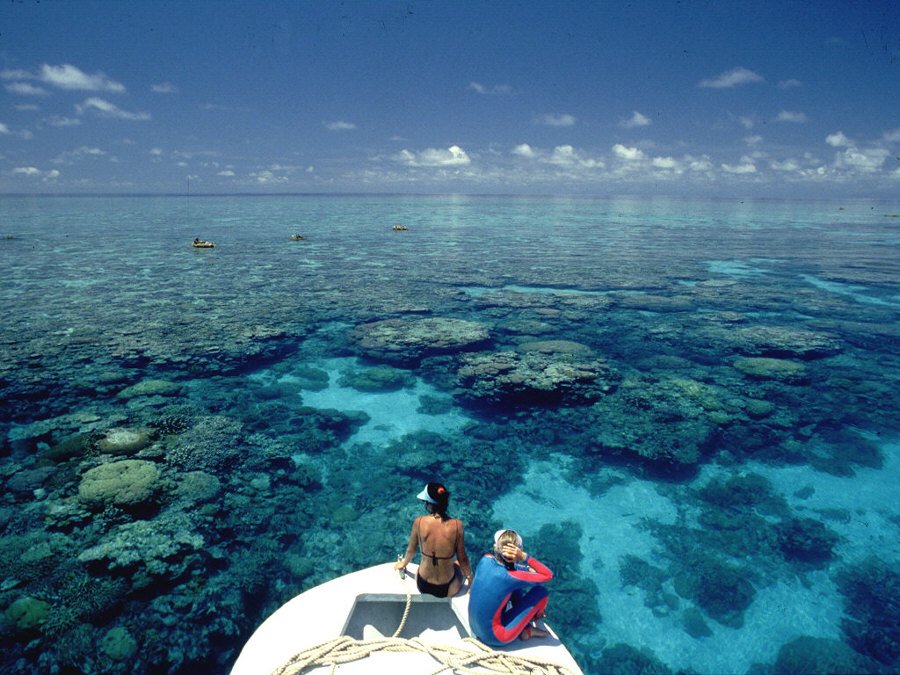 No wonder the average person is concerned about the environment! Such casual reporting that we have already lost a full half of the Great Barrier Reef!

This publicity is all part of a campaign to stop the development of new port facilities along the Queensland coastline. But rather than just come out and say they don’t want more development– that in fact they despise industry– the activist scientists dress it up as the end of the Great Barrier Reef as we know it.

I have written extensively about the water quality scare campaigns of the late 1990s and early 2000s [1,2,3]. They weren’t about new port developments, but they did prostitute science just like this new campaign.

This is a highly contentious claim. But it’s supported by the data [4]. Indeed the Australian Institute of Marine Science has been measuring water quality across the GBR for decades –- cross shelf and seasonal patterns of water column nitrogen (nitrite, nitrate, dissolved organic nitrogen, particulate nitrogen) and chlorophyll a concentrations –- and the data shows no trend of eutrophication. Indeed both nearshore and offshore reefs appear to be developing, for the most part, in a generally low-nutrient environment.

Nevertheless, hundreds of millions of dollars have been spent over the last 10 or more years ostensibly to improve reef water quality. Just a week ago I was told by a Central Queensland landholder that she has received a little over A$100,000 in government grants over the last few years to undertake improvements on her farm as part of the Reef Rescue program [5]. She said she doubted that any of the several projects could conceivably have an impact on reef water quality, but they have significantly improved the value of her property. Indeed, there is money to construct water troughs and increase ground cover and the list goes on [6]. That is the power of the agricultural lobby, they couldn’t beat the WWF campaign that painted them as destroying the reef [2], but they were encouraged to put their handout for government money and got A$400 million to be distributed to landholders and hangers-on.

All this money, and still the perception that reef water quality is deteriorating! Then again, I guess there wouldn’t have been the extra $200 million announced recently for rural industry, and extension of the same tax-payer-funded program to 2018, if there were a perception that the perceived water quality problem had been solved.

But what about this claim of a 50 percent decline in coral cover? The claim was recently made in the preamble to a petition by a group of “respected coral reef scientists” and promoted by Scientific America [7]. They reference a peer-reviewed paper entitled ‘The 27-year decline of coral cover on the Great Barrier reef and its causes’ published in the Proceedings of the National Academy of Science by Dr Glenn De’ath et al 2012. [8]

I’ll start to dissect this claim in Part 2 of a planned series on the Great Barrier Reef.

3. Deceit in the name of conservation By Jennifer Marohasy, March 2003 http://jennifermarohasy.com/wp-content/uploads/2011/08/Review55-1DeceitinNameConservation.pdf

5. Reef Rescue  “In the first phase of the Caring for our Country Reef Rescue program, the Australian Government committed $200 million over five years (2008-09 to 2012-13) to improve the quality of water entering the Great Barrier Reef lagoon. Over the course of the program more than 3200 individual land managers received water quality grants for on-farm projects. Through the second phase of Caring for our Country, the Australian Government has committed a further $200 million to continue efforts to protect the Great Barrier Reef through improvements to the quality of water flowing into the Great Barrier Reef lagoon. Over a further five year period the Reef Rescue program will enhance the reef’s resilience to the threats posed by climate change and nutrients, pesticides and sediment runoff through a number of complimentary approaches. The next phase of Reef Rescue will support activities that will contribute to both the Sustainable Environment and Sustainable Agriculture streams of Caring for our Country.” Downloaded from government website on April 4, 2013
http://www.nrm.gov.au/funding/reef-rescue/