‘APPARENTLY, the Rio + 20 Conference ended on Friday. The word apparently is used jokingly. Saturday’s headlines of both the New York Times and the Washington Post failed to include any mention of the closing of the conference. These “newspapers of record” focused on sensational sex trials instead. 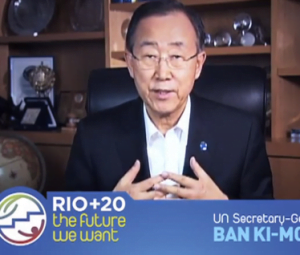 It seems the conference did not end as the editors wished. According to reports, the conference was tightly controlled by the BRIC countries – Brazil, Russia, India, and China – particularly Brazil which headed the conference. The leaders of Brazil, India and China have made it clear that they will not punish their citizens by stopping economic growth. Russia needs revenues from exports of oil and gas to maintain its budget and government spending.

The conference was different than past conferences for several reasons. There was no grand announcement of Western governments committing huge sums to the governments of the third world. There were no political rock-stars flying in at the last moment to put a deal together. There were no all night sessions extending far beyond the scheduled close of the meeting.

The European ministers were disappointed in the failure for the world to adopt their agenda. The non-government organizations (NGOs) were largely locked out of the process of reaching an agreement, their demands were ignored. The disappointment, even despair, expressed by a number of environmental groups is indicative of the success of the BRIC countries.

Those in the UN Framework Convention on Climate Change (UNFCCC), under whose auspices this conference was given, are no doubt disappointed that they will not have a $100 Billion a year Green Fund to manage. The leaders of some third world countries are no doubt disappointed they will not be receiving huge sums from the UNFCCC, dashing their hopes of expanding their Swiss bank accounts or obtaining that special villa in the south of France. But the conference gave some political leaders the opportunity to stay at a luxurious resort while preaching austerity for others. And the conclusion gives the opportunity for many ordinary citizens in the world to sigh with relief…

By Ken Haapala at www.sepp.org