Re: How to Keep the Sea Mouth of the Murray River Open

I was sent a podcast from your broadcast on 2GB Sydney radio this morning talking about the Lower Lakes and the barrages (Alan Jones on 2GB on June 20, 2012). Great to hear you put the Water Minister Tony Burke straight on a few issues including explaining to him that taking water from farmers/irrigators won’t stop drought! It was also nice to be quoted by you.

You might like to also consider quoting the famous British explorer Charles Sturt who wrote in about 1840:

“Australian rivers fall rapidly from the mountains in which they originate into a level and extremely depressed country; having weak and inconsiderable sources, and being almost wholly unaided by tributaries of any kind; they naturally fail before they reach the coast, and exhaust themselves in marshes or lakes; or reach it so weakened as to be unable to preserve clear or navigable mouths, or to remove the sand banks that the tide throws up before them.”

In fact, the Murray River often ran strong in spring and summer, but by autumn had slowed and then a southwesterly wind would pick up and the sea would pour in. So, the Lower Lakes, that the Minister now wants to keep permanently fresh, were often brackish and during prolonged drought, full of seawater.

In the mid 1800s, soon after the settlement of South Australia, there were many attempts to widen and deepen the Murray River’s sea mouth to make it more permanently navigable including through blasting and dredging. It’s a myth that the Murray’s mouth was ever deep and wide.

Of course the barrages/sea dykes built in the 1930s exacerbate the issue of the Murray mouth closing over. It is, in fact, perfectly natural for these types of barrier estuaries to close over and, when they do, they represent a flood risk.

To stop this happening in similar situations around the southern Australian coastline, local governments build groins/rock walls to stop the sand shoaling over the mouth (e.g. Lake Illawarra, NSW) and/or they dredge to remove the sand that shoals at the mouth (e.g. Lakes Entrance, Victoria).

These are also possible cost-effective solutions for the Murray Mouth i.e. build a rock wall and/or dredge.

A best and most natural way to help keep the mouth of the Murray open would be to simply remove the Mundoo barrage and let the tides of the Southern Ocean scour the mouth naturally.

Instead the Water Minister Tony Burke wants to use freshwater that could be used to grow crops to flush the mouth periodically. Ha!

Not only is buying back billions of dollars worth of water to flush the mouth stupid economics, but it won’t work.

Southern Australian barrier estuaries in their early stages of development are dependent on flood events to open their sea entrance. But the Murray River estuary had moved beyond this stage of evolution at the time of European settlement. The position and opening of the River Murray’s sea mouth was more influenced by the ocean as explained by South Australian historian J. C. Tolley in the early 1960s:

“The position of the channel at the mouth is governed principally by the ocean… During the great 1956 flood, the highest ever recorded on the lower Murray, the river outlet, although wider and deeper than normal, was situated in the easterly section of the overall movement pattern and was in a similar position as the situation of the mouth during the dry year of 1914.

However in April 1938, during a violent storm the mouth doubled its width in a few days and a great deal of sand at the western extremity was washed away. Within two months the channel had narrowed and when surveys were carried out 12 months later the position of the outlet was in almost the same situation as before the storm. During this period there was no great fluctuation in the volume of fresh water coming down the river.”

Please feel free to quote from any of the above. Alternatively, I’m happy to come on your radio program and explain this all again, in particular to try and bust this myth that if there were less irrigation upstream, the Murray’s mouth could be restored to its former glory. It was only ever a narrow and shallow entrance between sand dunes that would periodically close over. 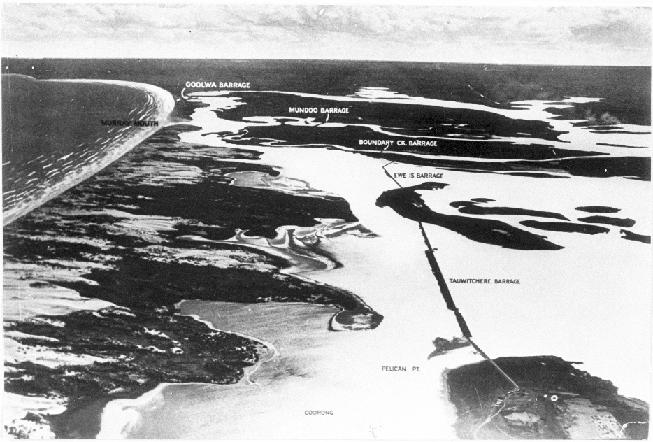 Not sure when this aerial photograph of the Lower Murray showing the barrages and sea mouth was taken. It has found its way into my growing collection of Murray Mouth photographs.