PASSIONATE about the wine industry, Philip White grew up in the Bremer Valley of the Lower Murray. He now lives on the opposite side of the South Mount Lofty Ranges at McLaren Vale. He tastes wine and writes about wine, and the wine growing regions of South Australia. 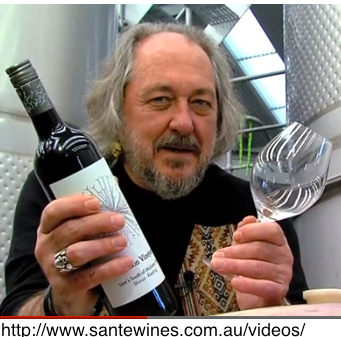 Today he was judging at the inaugural Currency Creek Wine Show. Currency Creek empties directly into Lake Alexandrina. Mr White describes it as, “A small, but very pretty appellation on an estuarine river system flowing into the lakes at the mouth of the Murray.”

And I love his description of the Currency Creek region more generally:

“Cross that range and you’re in rain shadow country, where Currency Creek and its neighbouring stream, the Finniss, flow out of Mosquito Hill country, Cox’s Scrub and Ashbourne, toward the south-east. Into the Murray estuary.

Over that way the stones are more aggro and tortured, and vary from the heavily-mineralised metamorphic schists of Kanmantoo, where I grew up on the Bremer River, to the intensely-varied fruitcake of chaos some big glacier dumped where the Finniss escapes the hills. It’s highly picturesque, from the almost English pubbiness out Ashbourne way, with European trees (just outside the declared region), to the wild reaches of samphire and reeds between the old river ports of Milang and Goolwa.

The vineyards seem largely to have been planted on the alluvial sands and clays of the sedimentary flats, and some terra rosa over limestone, but some have been more adventurous. Dr. Berthold Salomon, the Austrian winemaker, planted upstream on a rocky fruitloaf of glacial moraine: the complexity of the many ancient geologies shaved up, transported and dumped by massive ice has given him a multi-epoch pudding of stones of myriad mineral flavours and water-retaining capacities. A moraine terrine terrane, if you like. In these ancient parts, these are my favourite geologies for viticulture. Gimme chaos; get complexity.

But I’ve been up and down that eastern side of the range with him, licking rocks, finding the ones with the flavours that best match home.”

Mr White is not only still excited by the topography and geology of this region that borders Lake Alexandrina to the southwest, but he is also fascinated by the notion of opening the barrages.

Just yesterday he wrote at his blog:

“While the debate about the Murray-Darling reaches anarchic crescendo, there is a persistent and increasingly laudible argument that the barrages be removed from the Murray Mouth.  These are a series of weirs which secure the freshwater coming downstream by holding the saltwater of the ocean out. It’s supposed to be like a dam, with the fresh river water flowing over the barrages and into the ocean.  Recently, it’s been the other way round, with seawater leaking back through to the dirty polluted puddle of droughtwater within.  Diluting it, if the truth be known…

Now it has some reasonably fresh, if not exactly clean, water in it, the river system is being provided a short breathing space for these estuarine industries: down this end, dairying is also vital, but entirely dependent on a good supply of fresh river water.

The thing that scares me about all this is the ongoing popular presumption that the floods are somehow normal. These floods are not normal. Drought is normal. And ongoing.

I discussed this recently at Burra with the radical Natural Sequence Farming genius, Peter Andrews.

He pointed out that during the white exploration of its coastlines, Australia’s rivers were barely visible: there was no mighty Mississippi or Nile Delta emergent, and no surge like the hundreds of kilometers of freshwater that whoosh into the South Atlantic where the Amazon emerges from its jungle.

“The rivers here hardly ever made it to the sea,” Andrews said. “The water stayed in the country and kept it good. The rivers were explored from the interior. Somehow we’ve got to remember what it was like before us. We’ve got to learn to spread the water out, use it where it falls, take its energy and destructive force away, slow it down, and let it fill the country while cleaning and draining it in its own complex way. Slowly. If there’s any left to flow into the ocean, that’ll be good.”

And along these same lines I’ve written that if the current water reform process is truly about giving back to the environment, then we should be thinking back to a period before rivers and creeks became constricted by sheets of water running off compacted soils, before swamps were diverted, before river de-snagging and before the blasting of rock bars for paddle steamers.

As historian Bill Gammage notes in The Biggest Estate on Earth: How Aborigines Made Australia  back in the dreamtime shallow streams and overflows flushed more of Australia, filling billabongs, swamps and holes, and recharging springs and soaks.

That was a time when the health of a landscape was measured less by how much water was in a river, and more by how many kangaroos it could support.

In 1901 James Cotton, a Cobar pioneer, wrote that before the district was stocked with sheep and cattle it was covered with a heavy growth of natural grasses and that the ground was soft, spongy and very absorbent.

Overstocking was a problem throughout the Murray Darling Basin particularly during the late 1800s resulting in significant land and water degradation. Overstocking transformed soils in many districts from soft and spongy to hard clay that, instead of absorbing water, caused the rain to run off in sheets as fast as it fell – to again paraphrase Mr Cotton.

The ground may not be as soft, spongy and very absorbent as it once was, but there is no doubt that when the rain now falls on the Murray Darling, much less water runs off into adjacent rivers and streams than it did one hundred years ago. This must have implications for the amount of water flowing to South Australia.

Indeed a truly healthier Murray Darling Basin would mean less water for South Australia and as I’ve argued repeatedly, don’t waste what’s left on the dammed Lower Lakes; certainly not on the Lower Lakes during drought. Instead let’s open the barrages, or at least remove the Mundoo barrage, and let these coastal lagoons fill with some seawater as once happened naturally each autumn and for longer periods during drought.

Mr White is not frightened of the idea.  And if the salt water should on occasions extend beyond the Lakes and as far up the river proper as Jervois, where the off-takes for the irrigation pipeline begins, Mr White suggests that:

“They simply shoved a pipe into another place further upstream where the water was better, pumped her down and kept irrigating…”

Read about Philip White and good wine at http://drinkster.blogspot.com.au

Interestingly the blog post by Mr White links to ‘A fresh history of the lakes: Wellington to the Murray Mouth, 1800s to 1935’. This 2004 report certainly provides a lot of useful historical information about the Lower Lakes and how they were often fresh before the barrages. But the same report omits so much information to the extent that it denies Lake Alexandrina was once the central basin of a wave-dominated barrier estuary. If you are interested in a longer history consider my report ‘Plugging the Murray’s Mouth: The Interrupted Evolution of a Barrier Estuary’ that is available for download here:

And there is also my recent submission to the Murray Darling Basin Authority here:

http://jennifermarohasy.com/wp-content/uploads/2012/04/MDBA_Submission_Marohasy_Abbot_April16_2012.pdf (sorry this is 10Mb)