FOLLOWING aerial surveys to estimate polar bear numbers, it was recently reported in The Globe and Mail [1] that polar bear population numbers are higher than originally thought:

“The number of bears along the western shore of Hudson Bay, believed to be among the most threatened bear subpopulations, stands at 1,013 and could be even higher, according to the results of an aerial survey released Wednesday by the Government of Nunavut. That’s 66 per cent higher than estimates by other researchers who forecasted the numbers would fall to as low as 610 because of warming temperatures that melt ice faster and ruin bears’ ability to hunt. The Hudson Bay region, which straddles Nunavut and Manitoba, is critical because it’s considered a bellwether for how polar bears are doing elsewhere in the Arctic.”

Ever since that April 3, 2006, cover of Time Magazine many people have been very worried about polar bears. 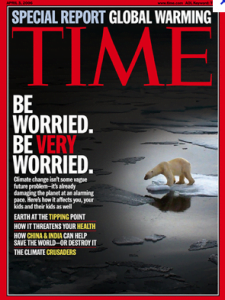 The Globe and Mail report is apparently quoting Drikus Gissing, Nunavut’s director of wildlife management. But I can’t find this number of 1,013 in the actual report on the survey. [2] And what does it mean if there are 1,013 bears?

According to Anthony Watts [3]:

“What I found most interesting is the clear message that polar bears are thriving in an environment where sea ice (NSIDC includes Hudson Bay as sea ice) seasonally disappears entirely.”

But, again, I can’t find any evidence in the report that polar bears are thriving?

It is generally assumed, by those who fear anthropogenic global warming, that polar bear numbers are declining globally. But many of us skeptical of this popular consensus have been quick to quote an assumed increase in polar bear numbers over recent decades from a low of about 5,000 in the 1960s to recent estimates of about 22,000.

But how reliable are these figures?

I’ve tracked down a copy of the ‘Proceedings of the First International Scientific Meeting on Polar Bears’ held in Fairbanks Alaska, 6-10 September 1965. It doesn’t actually state how many polar bears there were back then. The Canadian Wildlife Service Brief includes comment that:

3. Nunavut Government Study: “the [polar] bear population is not in crisis as people believed,”
http://wattsupwiththat.com/2012/04/05/nunavut-government-study-the-polar-bear-population-is-not-in-crisis-as-people-believed/#more-60777