ANTHROPOGENIC Global Warming (AGW) theory is currently the most fashionable climate theory and its proponents have risked much by predicting a continuation in what has been a 150-year general warming trend.

There are already some indications this trend is stalling with no increase in average global atmospheric temperatures for 15 years [1].

For those who subscribe to any one of the many theories that purport to explain natural climate variability the stakes are not so high: whichever way temperatures swing we can claim to be right. Indeed simply claiming that climate change is natural does not constitute a theory amenable to falsification.

There has been some arguing recently over ocean temperatures, in particular heat content, and how it is trending. I am happy to concede the AGW proponents might have one remaining residual warming trend to cling to here.

I’ve been watching the charts of sea surface temperature that have dipped recently [2]. Nothing for the warmists to promote here.

But sea surface temperature is not the same as ocean heat content.

Across at Jo Nova’s blog there is a chart ‘Climate Models versus Argo Data, Global Ocean Temperature’ that shows no increase in ocean heat content. But the chart only goes back to 2003 [3].

1. A strong positive linear trend in exists in world ocean heat content since 1955
2. One third of the observed warming occurs in the 700-2000 m layer of the ocean
3. The warming can only be explained by the increase in atmospheric GHGs 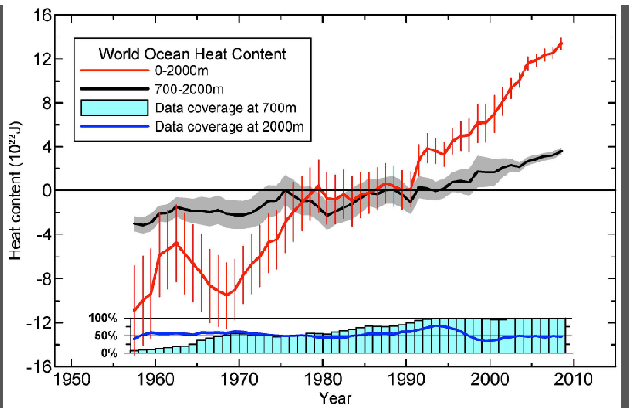 I can see the linear trend and I’m prepared to trust that one third of the warming has occurred in the 700-2000 m layer of the ocean. But the last claim: that the warming can only be explained by the increase in atmospheric greenhouse gases. This is an extremely speculative claim.

Clearly Levitus et al. are convinced that carbon dioxide is a key driver of climate change, but aren’t there other more compelling theories.