LAST November Ross Garnaut was commissioned, for an unknown fee, to produce an Update of the Review of climate change he completed in 2008. Garnaut is an economist who describes himself as an independent expert but he acts like a believer in a … END_OF_DOCUMENT_TOKEN_TO_BE_REPLACED

Two corporations, IBM and the ANZ Bank, are part of a boycott of this blog and my advertising revenue has plummeted.   It was never a lot of money, but it had helped pay the bills. The boycott is a consequence of an article attacking gay marriage … END_OF_DOCUMENT_TOKEN_TO_BE_REPLACED 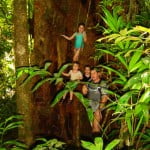 Dear Jennifer, It was a torrid night, but we survived.  Already exhausted from the preparations, the ensuing challenges of responding to the impacts of Yasi as its devastation was unleashed, has left us utterly humbled and in a presently … END_OF_DOCUMENT_TOKEN_TO_BE_REPLACED

According to American climatologist, Judith Curry, there are plenty of things to be skeptical about when it comes to Anthropogenic Global Warming, but the basic physics of gaseous infrared radiative transfer is not one of them. Dr Curry, is the … END_OF_DOCUMENT_TOKEN_TO_BE_REPLACED