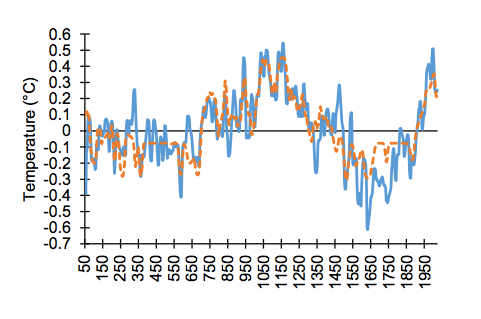 AFTER deconstructing 2,000-year old proxy-temperature series back to their most basic components, and then rebuilding them using the latest big data techniques, John Abbot and I show what global temperatures might have done in the absence of an industrial revolution.  The results from this novel technique, just published in GeoResJ [1], accord with climate sensitivity estimates from experimental spectroscopy but are at odds with output from General Circulation Models.

According to mainstream climate science, most of the recent global warming is our fault – caused by human emissions of carbon dioxide.  The rational for this is a speculative theory about the absorption and emission of infrared radiation by carbon dioxide that dates back to 1896.  It’s not disputed that carbon dioxide absorbs infrared radiation, what is uncertain is the sensitivity of the climate to increasing atmospheric concentrations.

This sensitivity may have been grossly overestimated by Svante Arrhenius more than 120 years ago, with these overestimations persisting in the computer-simulation models that underpin modern climate science [2].  We just don’t know; in part because the key experiments have never been undertaken [2].

What I do have are whizz-bang gaming computers that can run artificial neural networks (ANN), which are a form of machine learning: think big data and artificial intelligence.

My colleague, Dr John Abbot, has been using this technology for over a decade to forecast the likely direction of particular stock on the share market – for tomorrow.

Since 2011, I’ve been working with him to use this same technology for rainfall forecasting – for the next month and season [4,5,6].  And we now have a bunch of papers in international climate science journals on the application of this technique showing its more skilful than the Australian Bureau of Meteorology’s General Circulation Models for forecasting monthly rainfall.

During the past year, we’ve extended this work to build models to forecast what temperatures would have been in the absence of human-emission of carbon dioxide – for the last hundred years.

We figured that if we could apply the latest data mining techniques to mimic natural cycles of warming and cooling – specifically to forecast twentieth century temperatures in the absence of an industrial revolution – then the difference between the temperature profile forecast by the models, and actual temperatures would give an estimation of the human-contribution from industrialisation.

Firstly, we deconstruct a few of the longer temperature records: proxy records that had already been published in the mainstream climate science literature.

These records are based on things like tree rings and coral cores which can provide an indirect measure of past temperatures.  Most of these records show cycles of warming and cooling that fluctuated within a band of approximately 2°C.

For example, there are multiple lines of evidence indicating it was about a degree warmer across western Europe during a period known as the Medieval Warm Period (MWP).  Indeed, there are oodles of published technical papers based on proxy records that provide a relatively warm temperature profile for this period [7], corresponding with the building of cathedrals across England, and before the Little Ice Age when it was too cold for the inhabitation of Greenland.

I date the MWP from AD 986 when the Vikings settled southern Greenland, until 1234 when a particularly harsh winter took out the last of the olive trees growing in Germany.  I date the end of the Little Ice Age as 1826, when Upernavik in northwest Greenland was again inhabitable – after a period of 592 years.

The modern inhabitation of Upernavik also corresponds with the beginning of the industrial age.  For example, it was on 15 September 1830 that the first coal-fired train arrived in Liverpool from Manchester: which some claim as the beginning of the modern era of fast, long-distant, fossil-fuelled fired transport for the masses.

In our just published paper in GeoResJ, we make the assumption that an artificial neural network (ANN) trained on proxy temperature data up until 1830, would be able to forecast the combined effect of natural climate cycles through the twentieth century.

We deconstructed six proxy series from different regions, with the Northern Hemisphere composite discussed here. This temperature series begins in 50 AD, ends in the year 2000, and is derived from studies of pollen, lake sediments, stalagmites and boreholes.  Typical of most such proxy temperature series, when charted this series zigzags up and down within a band of perhaps 0.4°C on a short time scale of perhaps 60-years. Over the longer nearly 2,000-year period of the record, it shows a rising trend which peaks in 1200AD before trending down to 1650AD, and then rising to about 1980 – then dipping to the year 2000: as shown in Figure 12 of our new paper in GeoResJ.

The decline at the end of the record is typical of many such proxy-temperature reconstructions and is known within the technical literature as “the divergence problem”.  To be clear, while the thermometer and satellite-based temperature records generally show a temperature increase through the twentieth century, the proxy record, which is used to describe temperature change over the last 2,000 years – a period that predates thermometers and satellites – generally dips from 1980, at least for Northern Hemisphere locations, as shown in Figure 12.  This is particularly the case with tree ring records. Rather than address this issue, key climate scientists, have been known to graft instrumental temperature series onto the proxy record from 1980 to literally ‘hide the decline’[8].

Using the proxy record from the Northern Hemisphere composite, decomposing this through signal analysis and then using the resulting component sine waves as input into an ANN, we generated a forecast for the period from 1830 to 2000.

Figure 13 from our new paper in GeoResJ shows the extent of the match between the proxy-temperature record (blue line) and our ANN forecast (orange dashed line) from 1880 to 2000.  Both the proxy record and also our ANN forecast (trained on data the predates the Industrial Revolution) show a general increase in temperatures to 1980, and then a decline.

The average divergence between the proxy temperature record from this Northern Hemisphere composite, and the ANN projection for this period 1880 to 2000, is just 0.09 degree Celsius. This suggests that even if there had been no industrial revolution and burning of fossil fuels, there would have still been some warming through the twentieth century – to at least 1980.

The Intergovernmental Panel on Climate Change (IPCC) estimates warming of approximately 1°C, but attributes this all to industrialization.

The IPCC comes up with a very different assessment because they essentially remodel the proxy temperature series, before comparing them with output from General Circulation Models.  For example, the last IPCC Assessment report concluded that,

If we go back 1,400 years, we have a period in Europe immediately following the fall of the Roman empire, and predating the MWP.  So, clearly the IPCC denies that the MWP was as warm as current temperatures.

This is the official consensus science: that temperatures were flat for 1,300 years and then suddenly kick-up from sometime after 1830 and certainly after 1880 – with no decline at 1980.

To be clear, while mainstream climate science is replete with published proxy temperature studies showing that temperatures have cycled up and down over the last 2,000 years – spiking during the Medieval Warm Period and then again recently to about 1980 as shown in Figure 12 – the official IPCC reconstructions (which underpin the Paris Accord) deny such cycles.  Through this denial, leaders from within this much-revered community can claim that there is something unusual about current temperatures: that we have catastrophic global warming from industrialisation.

In our new paper in GeoResJ, we not only use the latest techniques in big data to show that there would very likely have been significant warming to at least 1980 in the absence of industrialisation, we also calculate an Equilibrium Climate Sensitivity (ECS) of 0.6°C. This is the temperature increase expected from a doubling of carbon dioxide concentrations in the atmosphere. This is an order of magnitude less than estimates from General Circulation Models, but in accordance from values generated from experimental spectroscopic studies, and other approaches reported in the scientific literature [9,10,11,12,13,14].

The science is far from settled. In reality, some of the data is ‘problematic’, the underlying physical mechanisms are complex and poorly understood, the literature voluminous, and new alternative techniques (such as our method using ANNs) can give very different answers to those derived from General Circulation Models and remodelled proxy-temperature series. After study in Stockholm and Dresden, the Swedish composer Peterson Berger settled in the former city, working as a music critic and contributing in a variety of genres to national music, whether in Wagnerian operas, choral works, songs, chamber music or piano pieces.

Scientific publishers Elsevier are making our new paper in GeoResJ available free of charge until 30 September 2017, at this link: